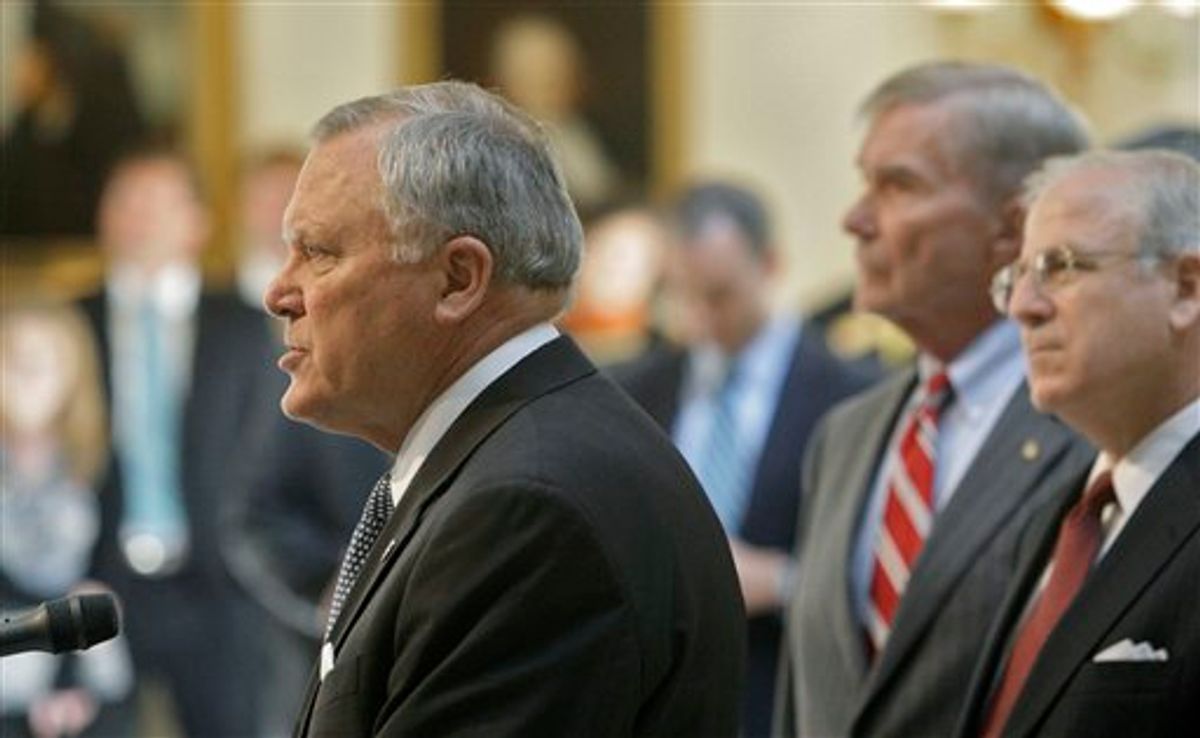 Gov. Nathan Deal speaks at a news conference, as former Attorney General Mike Bowers and Dekalb County DA Bob Wilson, right, listen, on Tuesday, July 5, 2011 in Atlanta. A probe has found that more than 78 percent of Atlanta schools examined by state investigators engaged in cheating on standardized tests. Deal said 44 of the 56 schools investigated took part in cheating. Investigators also found that 38 principals were wither responsible for the cheating or were directly involved in it. And they determined that 178 teachers and principals cheated. Of those, 82 confessed to the misconduct. (AP Photo/Atlanta Journal & Constitution, Bob Andres) (AP)
--

Former Atlanta schools Superintendent Beverly Hall knew about cheating allegations on standardized tests but either ignored them or tried to hide them, according to a state investigation.

An 800-page report released Tuesday to The Associated Press by Gov. Nathan Deal's office through an open records request shows several educators reported cheating in their schools. But the report says Hall, who won the national Superintendent of the Year award in 2009, and other administrators ignored those reports and sometimes retaliated against the whistleblowers.

The yearlong investigation shows educators at nearly four dozen Atlanta elementary and middle schools cheated on standardized tests by helping students or changing the answers once exams were handed in.

At one elementary school, four educators gathered at a colleague's home in Douglas County one weekend to have a "changing party" using answer sheets provided by a school official, the report states.

Teachers who admitted to investigators they cheated said they were under immense pressure to raise test scores, the investigators wrote. One elementary school principal forced a teacher to crawl under a table during a faculty meeting because that teacher's test scores were low, according to the report.

"Dr. Hall and her administration emphasized test results and public praise to the exclusion of integrity and ethics," the report states. "Dr. Hall either knew or should have known cheating and other misconduct was occurring in the APS system."

"Dr. Hall steadfastly denies that she, her staff, or the vast majority of APS teaching and administrative professionals knew or should have known of any allegedly widespread cheating," Deane wrote in a statement. "She further denies any other allegations of knowing and deliberate wrongdoing on her part or on the part of her senior staff, whether during the course of the investigation or before the investigation began."

The results of the investigation are being forwarded to prosecutors, and many of the cases could lead to criminal charges, Gov. Deal said.

"Nothing is more important to the future of our state than ensuring that today's students receive a first class education and integrity in testing is a necessary piece of that equation," Deal said. "When educators have failed to uphold the public trust and students are harmed in the process, there will be consequences."

Deal declined to answer questions about Hall or her role in the cheating scandal. He said the investigation is being forwarded to Fulton, DeKalb and Douglas county prosecutors for possible criminal charges.

All educators in the report also will be referred to the state Professional Standards Commission, which licenses teachers in Georgia, to determine whether they should have their licenses suspended or revoked, Deal said. The district has 6,000 employees, half of them teachers.

Interim Atlanta schools superintendent Erroll Davis said in a news conference later Tuesday that those responsible for the cheating will "not be put in front of children again." Davis took over the 50,000-student district Friday after Hall retired June 30.

He said he had not yet seen a full copy of the investigators' report.

"It's clear this is to involve the removal in a very short period of time of those who have created or helped created or participated in or should have halted this scandal," Davis said.

Atlanta school board chairwoman Brenda Muhammad said she was "devastated" by the results of the probe.

"I am very upset, very angry," she said. "Many of our children have been cheated, and that, I think, is the most sinful thing that we can do to our children because they look to us as adults. This board is committed to making sure that this never, ever, ever happens again."

Atlanta Mayor Kasim Reed called the report "a dark day" for the city's schools, where more than three-fourths of the children are poor.

"There is no question that a complete failure of leadership in the Atlanta Public School system hurt thousands of children who were promoted to the next grade without meeting basic academic standards," Reed said in a statement.

A number of other urban school districts and states have been caught up in cheating scandals in the last several years, including Baltimore and Houston, and Texas, Michigan and Florida.

Problems have mounted, some experts say, as teachers and school administrators -- particularly those in low-income districts -- bow to the pressure of the federal No Child Left Behind requirements and see cheating as the only way to avoid sanctions. Under the law, failing schools must offer extra tutoring, allow parents to transfer their children to higher performing schools and fire teachers and administrators who don't pass muster.

For parents like Shawnna Hayes-Tavares, who has three children in Atlanta schools, the results of the state investigation are disheartening. She said her son attended one of the suspect schools, and his test scores dropped dramatically when he transferred to another school, suggesting his earlier scores had been inflated.

"We are appalled," Hayes-Tavares said about the state report. "It's criminal."