The GOP turns its back on Reagan

In their hysterical debt ceiling posturing, Republicans ignore a warning from their patron saint 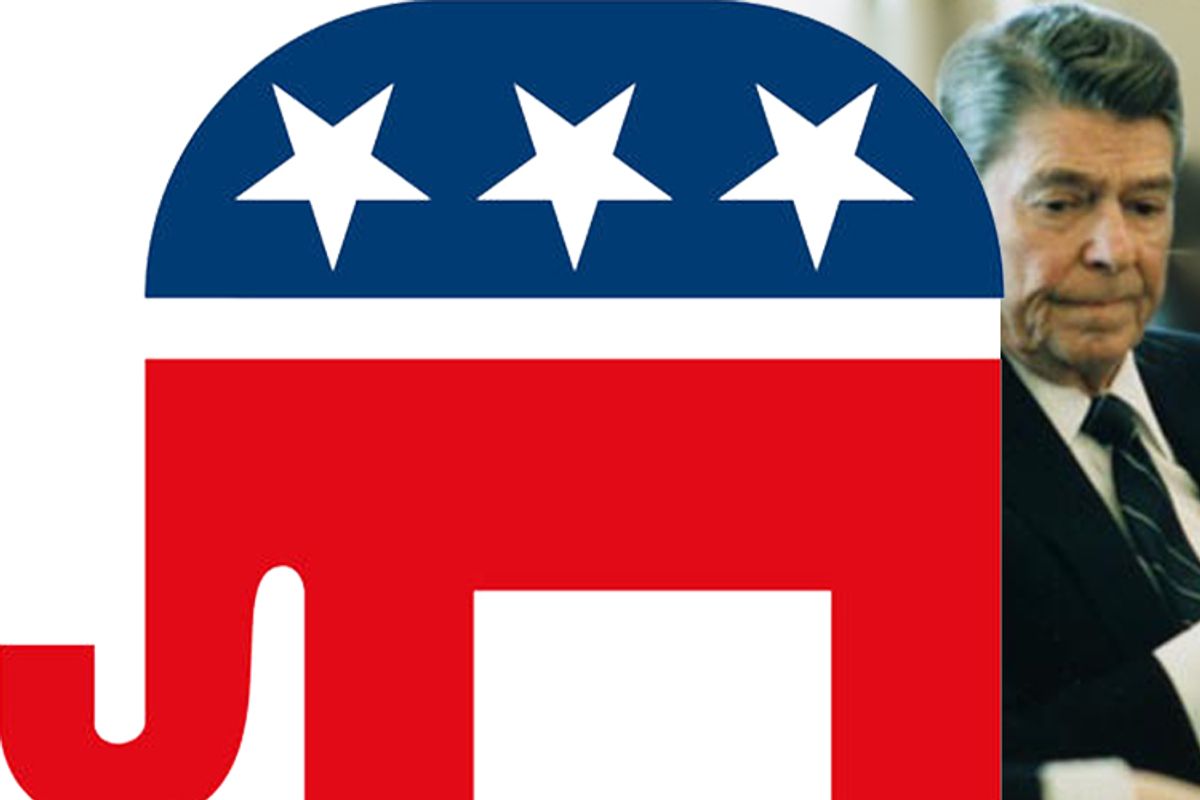 Much of what President Barack Obama knows about dealing with Republicans he learned at Harvard. And most of it is wrong. As David Remnick tells the story in his masterful book "The Bridge: The Life and Rise of Barack Obama," the president owes his election as editor of the Harvard Law Review to conservatives.

A born mediator, Obama knew how to negotiate bitter personal, racial and ideological conflicts among his classmates. Among Harvard's hyper-competitive law students, Obama stood out as somebody who "didn't personalize political differences."

So when conservatives realized they didn't have the votes to win, they swung to Obama. His classmate Brad Berenson, a Federalist Society member who worked in the Bush White House, told Remnick, "There was a general sense that he didn't think we were evil people, only misguided people, and he would credit us for good faith and intelligence."

Fine, except Harvard isn't Washington, and today's Republican leaders aren't really conservatives. That's just a word they use. Led by the Tea-Party fringe, the GOP's evolving into a utopian anti-government cult. As former Arkansas Gov. Mike Huckabee said in a lucid moment, "Ronald Reagan would have a very difficult, if not impossible, time being nominated in this atmosphere of the Republican Party."

He certainly would. Here's how President Reagan reacted to crazy talk about not raising the national debt limit in 1983: "The full consequences of a default -- or even the serious prospect of default -- by the United States are impossible to predict and awesome to contemplate. Denigration of the full faith and credit of the United States would have substantial effects on the domestic financial markets and the value of the dollar."

Congress gave Reagan the tax increases he wanted and lifted the debt ceiling. Anti-tax zealots predicted economic disaster. Events proved them wrong, precisely as they did after 1993 when President Bill Clinton won an increase in marginal income-tax rates that put the nation's balance sheet in order.

But hold that thought while Kevin Drum, in a fine rant, tells what happened next:

"Republicans got the tax cuts they wanted. They got the financial deregulation they wanted. They got the wars they wanted. They got the unfunded spending increases they wanted. And the results were completely, unrelentingly disastrous. A decade of sluggish growth and near-zero wage increases. A massive housing bubble. Trillions of dollars in war spending and thousands of American lives lost. A financial collapse. A soaring long-term deficit. Sky-high unemployment. All on their watch and all due to policies they eagerly supported. And worse: Ever since the predictable results of their recklessness came crashing down, they've rabidly and nearly unanimously opposed every single attempt to dig ourselves out of the hole they created for us."

Obama came into office with an economy losing 800,000 jobs a month, and a projected FY2009 budget deficit of $1.3 trillion. For all the crackpot rhetoric on Fox News and talk radio, his economic policies are mildly progressive at best. He even agreed to extend the Bush tax cuts, partly to gain extended unemployment benefits, and partly, one suspects, to retain the issue for his 2012 re-election campaign.

Much to the dismay of liberals -- Paul Krugman has taken to calling him "Barack Herbert Hoover Obama" -- the president has adopted much of the GOP's misleading belt-tightening rhetoric.

No, the U.S. government's nothing like your family. First, modern economies run on debt. Without borrowing, few families could afford homes, cars or college -- or start small businesses, for that matter. Second, unlike government, your family can't raise its own revenues or expand the monetary supply. The metaphor's inherently misleading.

Even so, in negotiating to raise the national debt limit, something Republicans did seven times under Bush, Democrats have given the GOP almost everything it wanted, proposing more than $4 in cuts for every dollar of increased revenue.

See, Obama can make spending concessions now because, come 2012, he can argue persuasively that simply letting the Bush tax cuts expire on schedule will reduce budget deficits to a sustainable level.

But nothing's enough, because it's not about economics. It's about power.

For Washington Republicans, it's become a matter of survival. Unlike macroeconomics, it's a zero-sum game. For a Democrat to succeed where the GOP manifestly failed would imperil its ability to win the presidency for the foreseeable future -- much like the bulk of the 1930s.

Therefore Obama must fail. Even if that means risking the catastrophic consequences President Reagan warned against, which is precisely what it does mean.

This much should be obvious to any skeptical observer.

But is it obvious to Obama? And what's he going to do about it?