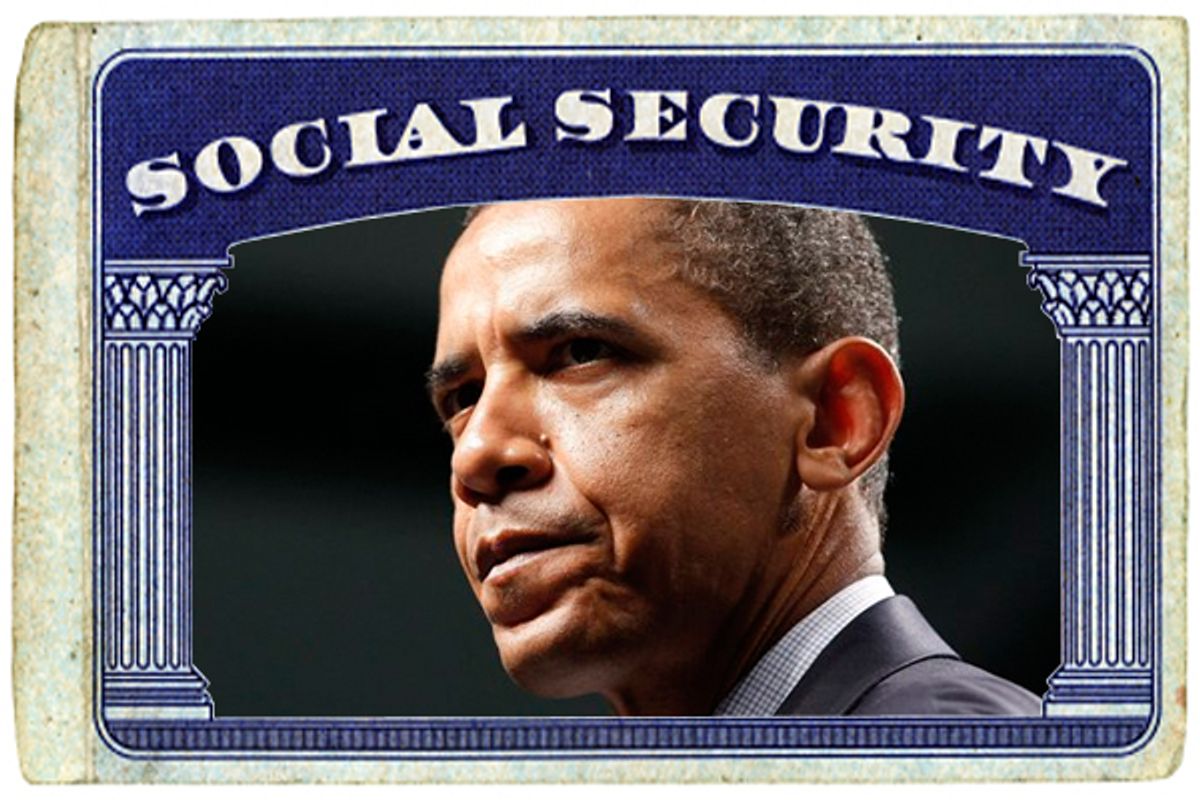 What could Obama possibly be thinking? The Washington Post and New York Times are both reporting that the president has decided to "go big" on the debt ceiling negotiations: Suddenly, big cuts to Medicare and Social Security are supposedly on the table, and instead of seeking $2 trillion in overall spending reductions over the next 10 years, the White House is now proposing $4 trillion in cuts over the same period.

Progressives are not amused, to put it mildly, at the prospect of a Democratic president unilaterally dismantling the social welfare state. Congressional Democrats are reportedly "anxious," "worried" and caught "off guard." Republican proposals to slash Medicare have proven to be a potent political weapon for Democrats -- and now Obama has gone over to the dark side?

It's all very confusing. Just a few days ago, the president was preaching a "balanced approach" to deficit reduction that included revenue increases as well as spending cuts. Republicans rejected his stance out of hand. So how does it make sense to seek even greater spending cuts?

The answer is that it doesn't make sense. Here's why: The new plan, reports the Times, supposedly hinges on Republicans agreeing to $1 trillion in new revenue.

The president's renewed efforts follow what knowledgeable officials said was an overture from Mr. Boehner, who met secretly with Mr. Obama last weekend, to consider as much as $1 trillion in unspecified new revenues as part of an overhaul of tax laws in exchange for an agreement that made substantial spending cuts, including in such social programs as Medicare and Medicaid and Social Security -- programs that had been off the table.

Excuse me? Let's step back here a second. Democrats are right to be alarmed at the prospect of big cuts to entitlements. But how do you suppose your average House Republican is reacting to the news of what would be, for all intents and purposes, a trillion dollar tax hike? I can't imagine they're very pleased, and I don't see how Boehner can possibly keep his caucus together on this issue. It's even more unrealistic to assume that ending the Bush tax cuts on the wealthy could be folded into this deal, as some reports are suggesting.

There is nothing more important to the GOP than its stance on taxes.

And indeed, the only line that really rings true to me in the New York Times piece makes exactly that point:

Aides to Mr. Boehner said that no tax increases were on the table and that he had not agreed to the expiration of any tax cuts.

Combined with House Majority Leader Eric Cantor's oft-repeated declaration that any closing of tax loopholes or tax breaks without equivalent tax cuts elsewhere is a non-starter, and assertions today from GOP sources that any "revenue increases" must be accompanied by lower tax rates overall, and it becomes very difficult to see where this magical $1 trillion comes from.

So where does that leave us? How about right where we were last week? The White House has decided that Republican intransigence on taxes makes any real long-term agreement impossible. The obvious step for Obama is to extract the maximum political advantage here by appearing willing to negotiate a "grand bargain" -- to be the guy mature enough to compromise. Ezra Klein makes the case:

We're likely seeing the White House make a show of their interest in a compromise even though there's no compromise on the table. That fits with their general plan here: if the debt ceiling is going to cave in, they're going to make sure it does so on the Republicans. And the best way to get Democrats out of the way is to show that they did everything possible to make a deal while Republicans elevated the repetition of the word "no" into something approaching performance art.

I will concede -- it is scary to hear reports about the president bending over backward to offer entitlement cuts when the party on the other side of the negotiating table has proven themselves utterly unwilling to make any meaningful compromises. And it is completely insane that Washington has decided that deficit reduction is first priority of the day when unemployment is at 9 percent and the U.S. government is able to borrow money at historically low rates. But I think outraged progressives should try to imagine how the country as a whole might be perceiving these negotiations. One side, by every indicator, seems willing to make a deal. The other is threatening to trash the U.S. economy if it doesn't get 100 percent of its demands met. That doesn't strike me as a politically viable position.

But stay tuned. Even as I write these words, Obama is meeting with all key congressional players at the White House. The situation is very much in play.