The economy is broken, and Washington can't fix it

Finally, some bipartisan unity: Both parties unite in ignoring the true meaning of a horrible jobs report 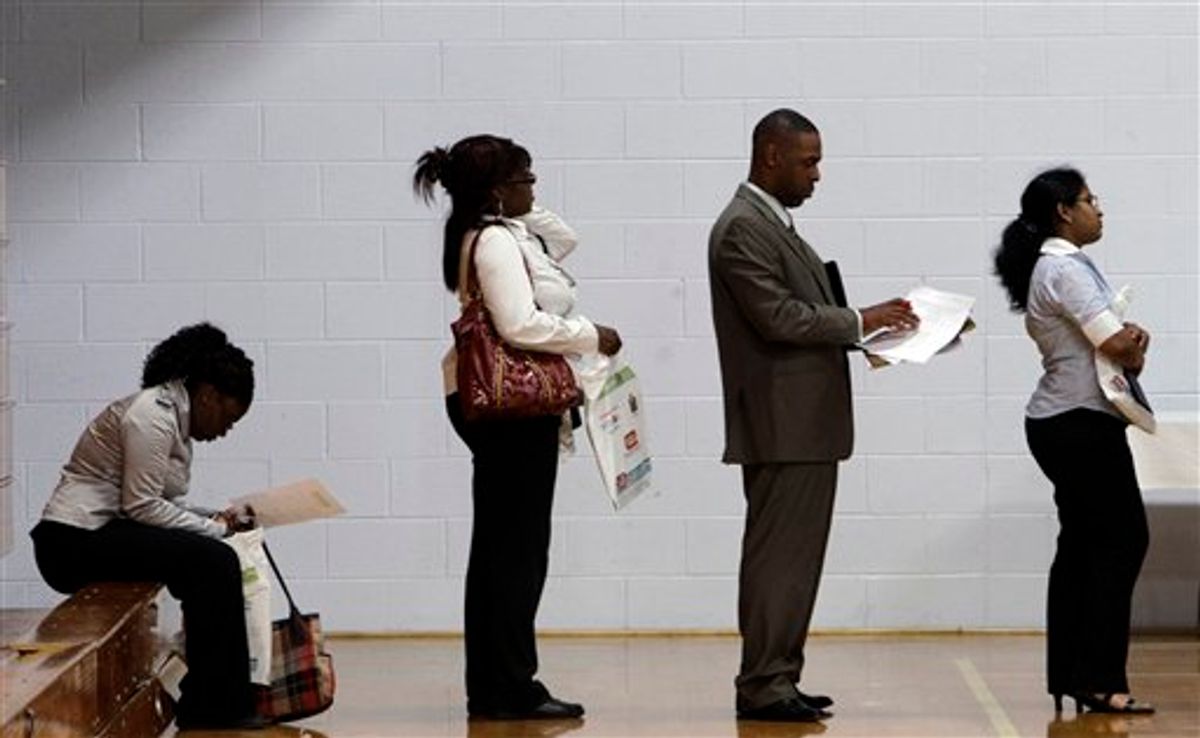 In this June 15, 2011 photo, job seekers wait in a line at a job fair in Southfield, Mich. Two years after economists declared the end of the Great Recession, the rebound is the weakest since the 1930s and the most lop-sided. (AP Photo/Paul Sancya) (AP)
--

I am at a loss to decide which is the more depressing response to today's miserable jobs report: Democratic or Republican.

First we have Austan Goolsbee, chair of the president's Council of Economic Advisers, who interprets the numbers as "reflecting the recent slowdown of economic growth due to headwinds faced in the first half of this year."

"Headwinds"? While it is still theoretically possible that temporary factors -- the Japan earthquake, gas prices, etc -- are responsible for the current slowdown, the reality of the current situation calls for much stronger rhetoric from the administration, at the very least. The jobs report is a disaster, both for millions of Americans and for Obama's political prospects. The White House should be making it clear, every single day, that job creation must be the No. 1 priority.

But when you hear what Goolsbee's got in his job-creation toolbox: "measures to extend the payroll tax cut, pass the pending free trade agreements, and create an infrastructure bank to help put Americans back to work" maybe it's not so hard to understand why Obama hasn't got more to say. That's some thin gruel, there, folks. Yeah, sure, House Republicans pose a formidable, perhaps even impossible-to-overcome, obstacle to passing any kind of effective job-creation legistlation, but is that all you've got, Austan? Come on.

Yet John Boehner's reaction is even worse. As Steve Benen points out, when the job numbers looked good in the spring, Republicans claimed credit should be given to the new House majority. But now that the numbers suck, suddenly it's all about Obama's out-of-control spending.

Legislation that raises taxes on small business job creators, fails to cut spending by a larger amount than a debt limit hike, or fails to restrain future spending will only make things worse -- and won't pass the House. Republicans are focused on jobs, and are ready to stop Washington from spending money it doesn't have and make serious changes to the way we spend taxpayer dollars.

Republicans are focused on jobs? House Republicans have not passed a single jobs-related piece of legislation during their majority. Felix Salmon is appropriately scathing: "It's downright bonkers to think that... government spending reduces job creation, while pushing for ever-larger spending cuts is the way to be ... focused on jobs."

"Spend less money, create more jobs" is the kind of world one normally finds only in Woody Allen movies, and it's a profoundly unserious stance for any politician to take. Spending cuts, whether they're implemented by the public sector or the private sector, are never going to create jobs. And there's simply no magical ju-jitsu whereby government spending cuts get reversed and amplified, becoming larger private-sector spending increases.

Here is a useful fact. Since Obama took office: government payrolls -- federal, state, and local -- have declined by 500,000. Reducing government spending at the levels requested by Republicans will result in hundreds of thousands of additional job cuts. The newly unemployed will be entering a job market where opportunities are scarce to nonexistent. The subtraction of their paychecks will place a further drag on the economy. Those "headwinds" will become a gale.

And what does our president say?

President Barack Obama says the uncertainty over whether lawmakers will raise the nation's debt limit is keeping businesses from hiring.

Speaking in the Rose Garden, Obama says that once Congress reaches an agreement on the debt ceiling, businesses will have the confidence they need to add workers to their payrolls.