Thousands of protesters line the streets of Beirut, Friday 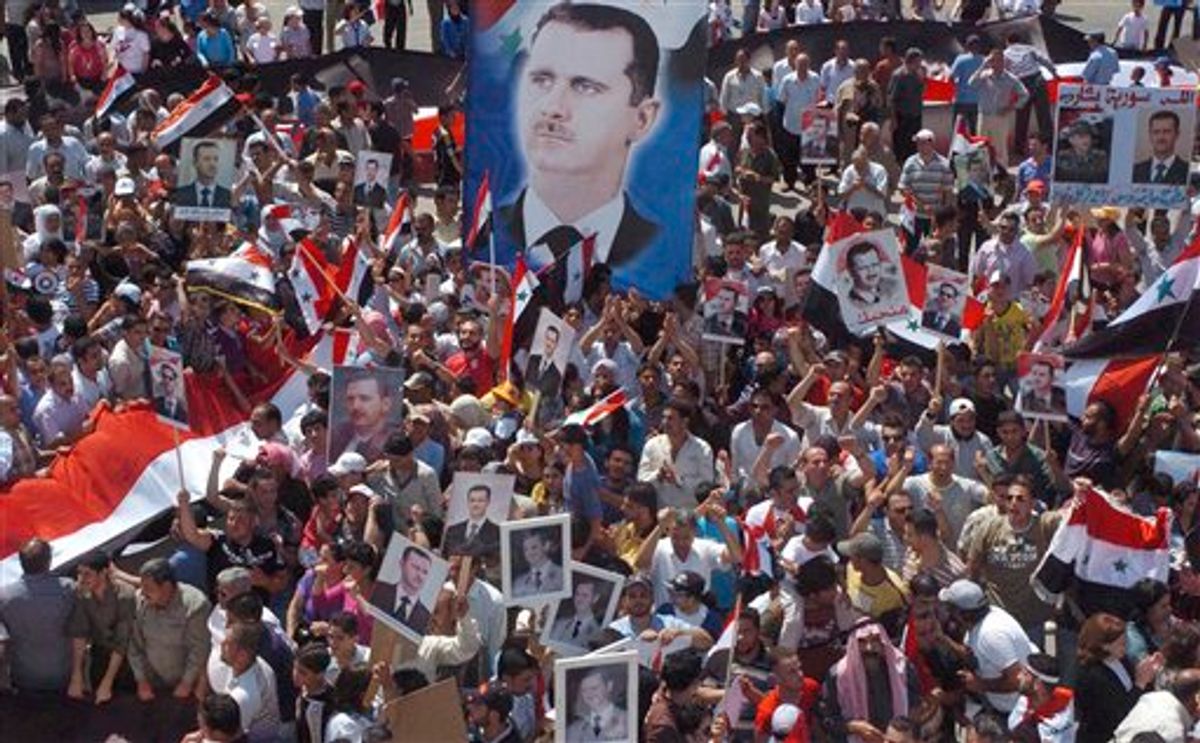 In this photo released by the Syrian official news agency SANA and according to them, Pro-Syrian President Bashar Assad demonstrators, display posters with his image, during a gathering to show their support, at Ezraa village in Daraa province, Syria, on Wednesday July 6, 2011. Syrian security forces may have committed crimes against humanity during a deadly siege of a western town in May, Amnesty International said Wednesday, citing witness accounts of deaths in custody, torture and arbitrary detention. (AP Photo/SANA) EDITORIAL USE ONLY (AP)
--

Syria accused the United States of inciting unrest on Friday, saying the U.S. ambassador's unauthorized trip to the flashpoint city of Hama proved Washington has a hand in a four-month uprising seeking to topple the country's autocratic regime.

The strong statement comes as Syrians are expected to take to the streets across the country in a weekly show of defiance against the 40-year-old family dynasty of President Bashar Assad.

Hama, the site of a 1982 massacre by Assad's later father and predecessor, has become a focal point of the uprising and has drawn the largest crowds since the revolt began in mid-March.

The U.S. is trying to "aggravate the situations which destabilize Syria," the statement said.

Hama poses a potential dilemma for the Syrian regime because of its place as a symbol of opposition to the rule of the Assad family. In 1982, the late Hafez Assad ordered troops to crush a rebellion by Islamist forces, killing between 10,000 and 25,000 people, rights activists say.

A major offensive could make the city a fresh rallying cry for the opposition, but Assad's regime also does not want a repeat of last Friday's stunning rally, when an estimated 300,000 people protested.

In bold defiance since, Hama residents have shut down the city, going on strike and trying to prevent security forces from entering by setting up checkpoints of tires and concrete blocks.

Still, security forces killed 21 Hama residents this week while trying to quell more demonstrations, according to a count by the Syrian Observatory for Human Rights.

Ambassador Robert Ford traveled independently Thursday to Hama to show solidarity with residents protesting against Assad's regime, according to the State Department.

He participated in a government-organized excursion to northern Syria last month.

State Department spokeswoman Victoria Nuland said Ford "spent the day expressing our deep support for the right of the Syrian people to assemble peacefully and to express themselves."

Ford reached the city after passing checkpoints run by the military and Hama residents. Nuland said he met nervous residents and saw many shops closed. He also visited a hospital treating the wounded.

Nuland said Ford hoped to remain in Hama on Friday, with many people worried about a potential crackdown, but it was not immediately clear if he was still there.

Calls Friday to the U.S. Embassy in Damascus were not immediately returned.

The Syrian regime has used a mix of fierce violence and promises of imminent reform to try to quell the uprising, which was inspired by the revolutions in Tunisia and Egypt. Some 1,400 people and 350 members of security forces have been killed since demonstrations began, activists say.

The regime blames "armed thugs" and foreign conspirators for the unrest, not true reform-seekers.

Overnight, Syrian forces killed three people in a demonstration in the Damascus suburb of Harasta, activists said. Many protesters have recently been opting for nighttime demonstrations and candlelight vigils, aiming for a time when the security presence thins out.

A Syria-based activist said residents told him that security forces used live bullets and smoke bombs to quell the demonstration. He spoke on condition of anonymity, fearing for his own safety.

Syria has banned nearly all foreign media and restricted media coverage, making it nearly impossible to independently verify events on the ground.

Associated Press writers Elizabeth A. Kennedy in Beirut and Bradley Klapper in Washington contributed to this report.