How a one-term president is made 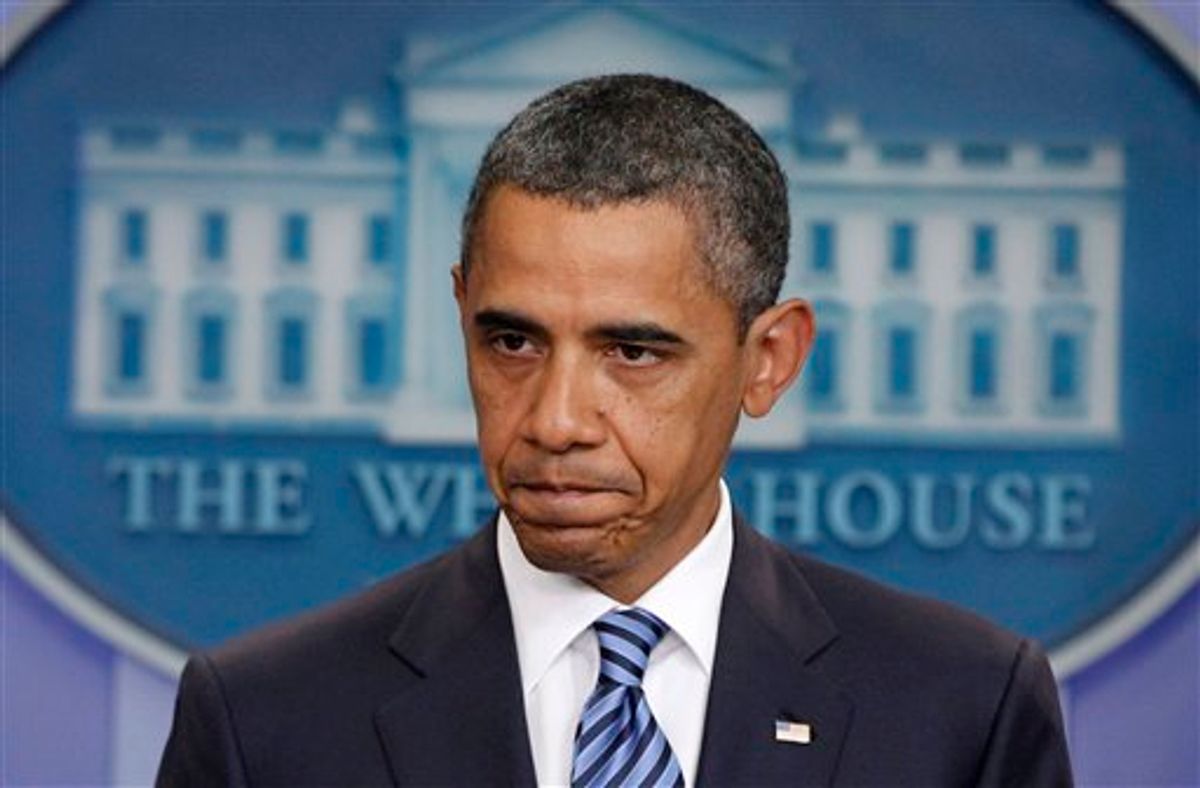 Republicans hope to unseat President Obama next year with a message that goes something like this: He inherited a bad economy and made it worse, squandered hundreds of billions of dollars on a stimulus program that didn't create jobs, and blew a massive hole in the deficit that sapped the private sector's confidence.

You can make yourself crazy pointing out how flimsy these arguments are, but the swing voters who will decide the 2012 election won't be relying on a measured analysis of the logic of each party's case to make up their minds. It's the state of the economy that will dictate their verdict. If they perceive it to be improving, they will reject the GOP's claims about Obama's "failed" economic stewardship. But if they believe it is stagnant or getting worse, the GOP line will be music to their ears.

Which is why the new unemployment data released Friday morning is so devastating for Obama. As Andrew Leonard noted already, the numbers themselves -- a 9.2 percent unemployment rate and almost nonexistent job creation for June -- are truly awful. But what's worse for Obama is whatever job-creation momentum seemed to exist a few months ago is now completely gone. Joblessness is again rising, with no indication that a significant downward trend is on the horizon. And the idea of a new, meaningful stimulus program before the 2012 election has been off the table since last November, when Republicans won control of the House. It's looking more and more likely that unemployment will remain above 8 percent -- perhaps well above 8 percent -- between now and Election Day 2012.

Contrast Obama's plight to the situation Ronald Reagan faced at this same point in his presidency. Like Obama, Reagan came to power during a period of intense economic anxiety, with unemployment, inflation and interest rates all alarmingly high. And things only got worse in Reagan's first two years as president, with a full-blown recession breaking out in the fall of 1981 and joblessness soaring to well over 10 percent. Reagan's approval rating dipped below 40 percent, his party suffered a drubbing in the 1982 midterms, and even members of his own party began dismissing him as a one-term president.

But the nature of the early '80s downturn, which was mainly the product of the tight, inflation-fighting policies of Fed chairman Paul Volcker, was different from the current one. As Volcker loosened his reins, growth exploded and the unemployment rate steadily ticked down. At this same moment in 1983, joblessness stood at 10.1 percent -- a high number, obviously, but down from a peak of 10.8 percent a few months earlier. A month later, it was down to 9.4 percent, and by the end of '83 it had fallen under 8 percent. It was against this backdrop that Reagan's feel good "Morning in America" campaign resonated so powerfully with Americans in the 1984 election.

The key was that the improving economy made swing voters want to believe that Reagan's economic program was a triumph. Of course, two years before the '84 election, when unemployment had been spiking, they'd been just as anxious to tune the president out, ignoring his pleas to give his program time and siding with the Democrats, who argued that Reagan was ruining the economy with high deficits.

It's clear now that Obama won't be benefiting from the same steep unemployment drop that defined the second half of Reagan's first term. Of course, Reagan won a 49-state rout, meaning there's still room for Obama to win a second term even if the economy isn't improving nearly as rapidly. But it needs to be showing some real signs of life -- and those signs need to come well before November 2012. (Just remember the example of George H.W. Bush, who received some of the best economic news of his term the week before the 1992 election; but swing voters had already written him off as a failed president.) Yes, there's still time for the economy to come to life and rescue Obama, and maybe it will, but Friday's report is the most dramatic reminder yet that it doesn't have to -- and that the clock is ticking.

Even with a Republican Congress, Obama still has some limited power to goose the economy. He also could benefit if the GOP were to nominate a fringe candidate -- like, say, Michele Bachmann. Of course, the chances that the GOP will nominate Bachmann probably decrease with a jobs report like Friday's, which figures to drive home to Republican elites the degree to which Obama truly is vulnerable next year, provided they nominate an electable candidate.

In other words, Friday is a pretty good day to be Mitt Romney.

UPDATE: Just to be clear, the intent of this post was not really to begin "digging Barack Obama's grave." It's absolutely true, as I acknowledged above, that the latest "devastating" jobs numbers will be quickly forgotten if the economy begins showing measurable improvement -- and that a modest but steady decline in unemployment in, say, the first half of 2012 could very well help Obama secure a second term. Who knows -- maybe the economy will end up coming to life on its own?

The point, though, is that the new figures represent the strongest evidence yet that the optimism of earlier this year -- when job growth seemed to be rising and there was talk that a real recovery might be underway -- was a mirage. And the combination of a stalled (or regressing) economy and a Republican-controlled House that substantially reduces Obama's ability to take meaningful action could be the ingredients from which a one-term presidency is made.