The truth about the deficit and Social Security

Actually, it has almost nothing to with our soaring national debt. So why is there talk of cutting it? 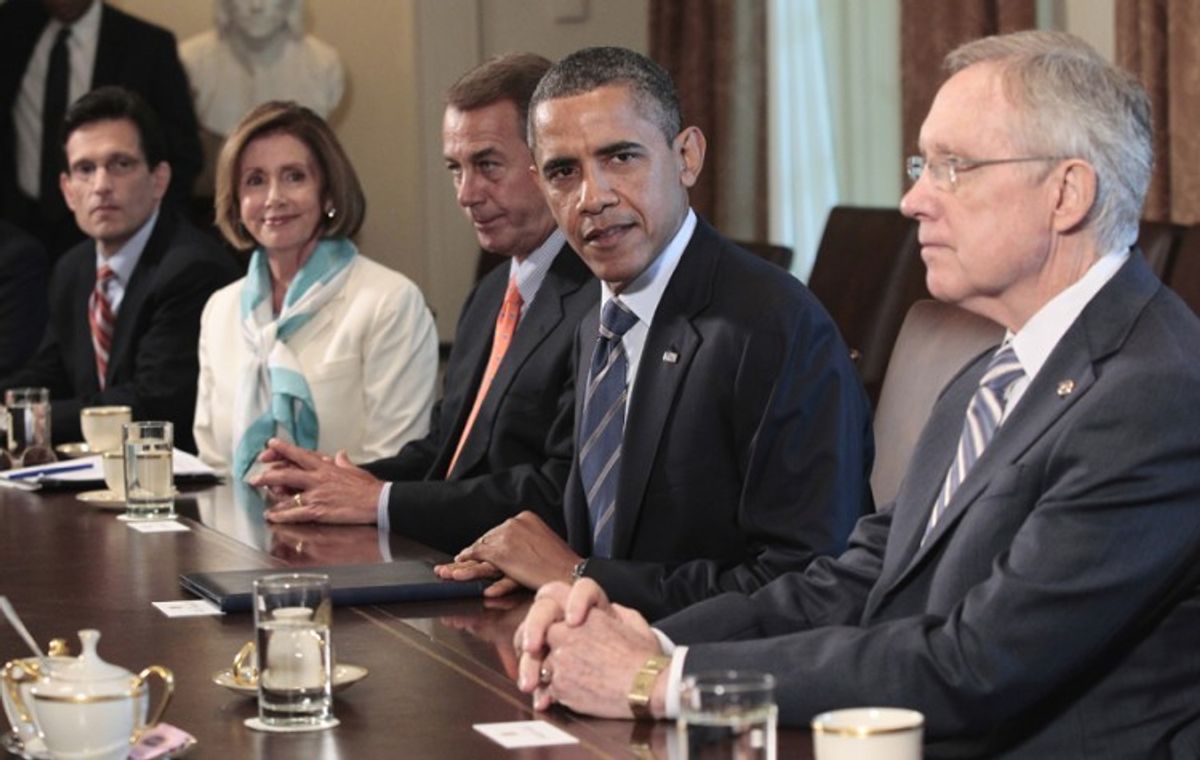 This morning the Washington Post reported that the White House is offering to cut Social Security as part of a broader budget deal with the Republicans. At last we have the answer to the question everyone has been asking about the Democrats: How far can they go?

The financial collapse of 2008 has taught us to be skeptical of economic forecasts that simply spin trends out into an indefinite future. Most central bankers, economists and business leaders failed not only to foresee, but even to imagine, the colossal dimensions of that catastrophe.

Now, however, the very people who said that there was no way for regulators to recognize financial bubbles in advance predict budget gloom and doom. Scary charts of the time path of U.S. debt-to-GDP ratios -- many originating from the Peterson Foundation -- fill the media, along with specious arguments about how budgets affect national income.

The strangest of these debates involve Social Security. The "arguments" here sort mostly into two groups: One rails on about how "runaway entitlements" are leading to a deficit explosion. The other advises that Social Security can be "saved" in the long run by timely changes, typically involving a mix of taxes and benefit cuts, including, notably, yet another rise in the age of eligibility for the program.

Neither point of view makes much sense. The simple fact is that the deficit did not swell tidally until the financial crisis hit. While George W. Bush’s tax cuts destroyed the Clinton budget surpluses, enough tax revenues trickled in to keep the deficit from blowing out until the economic equivalent of Hurricane Katrina hit in the fall of 2008. It was the one-two punch of the bank bailouts and the Great Recession that led to today’s giant gap between general revenues and expenditures.

But even now there is no near-term threat to Social Security’s solvency. In 1983, Congress enacted into law recommendations of the Greenspan Commission to raise Social Security taxes to cover the retirement bulge coming from baby boomers. Since then, the program has piled up enormous surpluses. These have been invested in government bonds, thus helping to finance the rest of the government.

The 2011 Report of the Trustees of the Social Security Trust Fund projects that the Trust Fund and interest earnings from it will suffice to cover all benefit payments until 2036. Even then, the fund would not be empty -- the report projects that tax revenues will still cover approximately 75 percent of promised benefits until 2085. Talk of the bankruptcy of Social Security is hot air.

2036 is a long way off. The argument in 2011 is about whether there is any reason to do anything at all right now. The case pressed by self-proclaimed “rescuers” of Social Security such as Peter Orszag, the former head of the Obama administration’s Office of Management and Budget who has since accepted a position at Citigroup, is unpersuasive.

The first yellow flag is Orszag’s frank acknowledgment that Social Security features barely at all in any putative budget shortfall: "Social Security is not the key fiscal problem facing the nation. Payments to its beneficiaries amount to 5 percent of the economy now; by 2050, they’re projected to rise to about 6 percent." A rise of 1 percent in four decades! Former Sen. Alan K. Simpson, co-chair of the president’s deficit commission, claimed that his group’s deficit report "harpooned all the whales in the ocean, and some of the minnows." Lost in the blaze of publicity about the commission is the crucial fact that Social Security is plainly one of the minnows.

But the whole discussion is even fishier. If any shortfall ever materializes, it could easily be made up by transfers from general tax revenues, though that would breach the long-maintained fiction that Social Security is a contributory system on the model of most private insurance. (It is actually a pay-as-you-go system, where current taxes pay benefits to current beneficiaries, with the final guarantee of the whole system’s soundness being, in the last analysis, the success of the economy as a whole.) But if fears about 2036 are unbearable, plenty of ways exist that would fix the program without threatening anyone’s life support system.

Between 2002 and 2007, for example, the richest 1 percent of Americans garnered 62 percent of all income gains, while the bottom 90 percent of the population saw their incomes grow by 4 percent. At the same time, thanks to the Bush tax cuts, the rich were also paying proportionately fewer taxes. Considering that ordinary Americans fronted most of the money for the bank bailouts and have endured most of the recession’s “collateral damage,” it seems only simple justice that if the program needs fixing, the best way to do it would be to raise the ceilings on earnings subject to the Social Security tax, which is currently only $106,800. That would put the burden on people who cannot plausibly claim to be suffering.

But if, for example, productivity runs even slightly higher than in the forecasts, there may be no shortfall of any kind. Considering that the projected shortfall is still a quarter century away, there is no good reason to tinker with a program that, as the Washington Post editorialized in 2005, provides the majority of income "for nearly two-thirds of the elderly … [and] the only source of income for one-fifth of all elderly people, for 25 percent of non-married elderly women, and for 38 percent of elderly African Americans and Hispanics."

But Orszag and others who agree that the program makes at most a minor dent in the budget, nevertheless argue for "fixing" it now. Their reason is remarkable: As Orszag frankly confesses, "even though Social Security is not a major contributor to our long-term deficits, reforming it could help the federal government establish much-needed credibility on solving out-year fiscal problems." Cut benefits, in other words, simply to prove to financial markets that the government can do it. As Paul Krugman observes, this position is tantamount to claiming that we should cut Social Security now, because we might have to do it in the future. Polls show strong public opposition to cuts in Social Security. Considering the havoc that the financial crisis wreaked on the home values and pensions of ordinary Americans, proposals that Democrats should roll over and join Republicans and the Peterson Foundation in cutting Social Security is outlandish. As profits for the banks the American people rescued soar, it marks a new low in the Democratic Party’s long retreat from the New Deal’s glittering promise that ordinary Americans, too, deserved to share in prosperity.

This essay is adapted from Thomas Ferguson and Robert Johnson’s "A World Upside Down: Deficit Fantasies in the Great Recession," which appears in the new issue of the International Journal of Political Economy (Vol. 40, No. 1, pp. 3-47). That essay is a revised and expanded version of their working paper for the Roosevelt Institute.

Rob Johnson is a senior fellow and the director of the Project on Global Finance at the Roosevelt Institute.

Thomas Ferguson is a professor of political science at the University of Massachusetts, Boston and senior fellow at the Roosevelt Institute.