A woman who stood for something 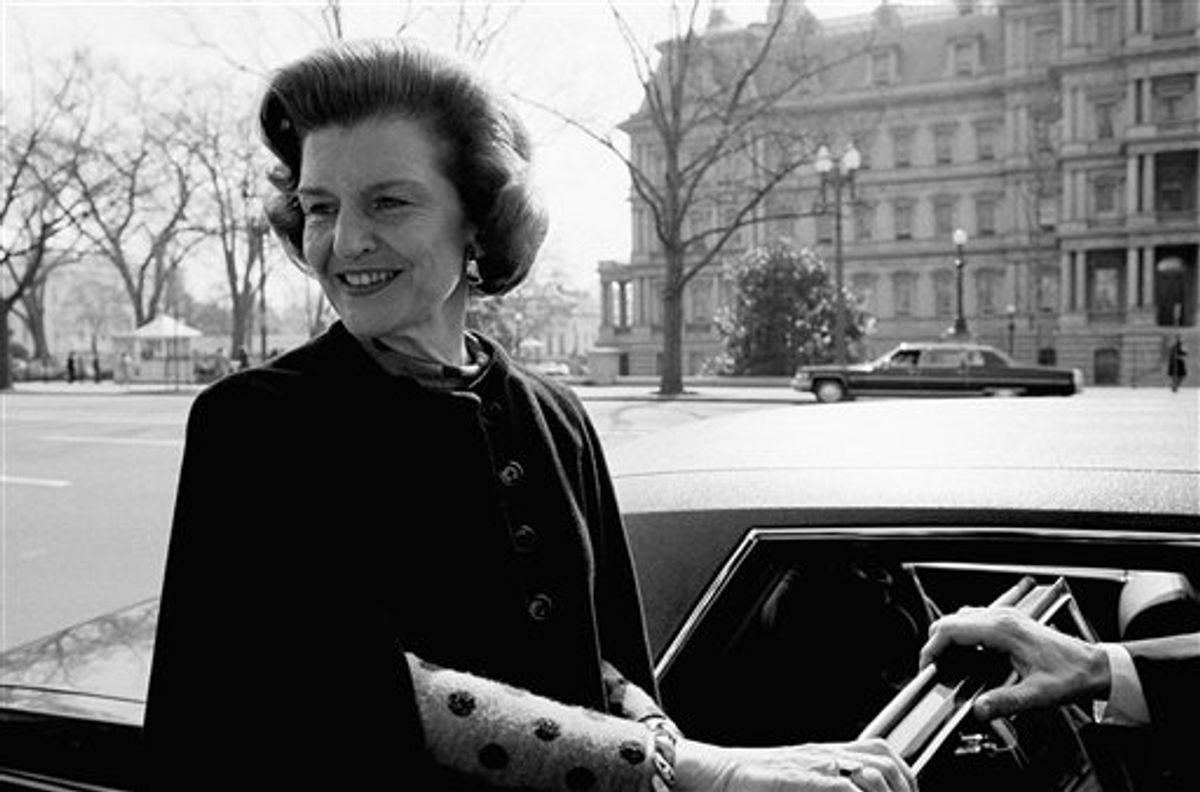 FILE - In this Thursday, Feb. 21, 1975 file picture, first lady Betty Ford prepares to enter an automobile in Washington after attending a Chamber of Commerce reception. Ford, the former first lady whose triumph over drug and alcohol addiction became a beacon of hope for addicts and the inspiration for her Betty Ford Center, has died, a family friend said Friday, July 8, 2011. She was 93. (AP Photo/Chick Harrity) (AP)
--

It would be easy to say that Betty Ford had one great claim to fame, as a leader of the national movement for substance-abuse recovery, because of the famous Southern California treatment center that bears her name. Given the celebrity-soaked media, the pipsqueak actress Lindsay Lohan now seems to have more association with the name "Betty Ford" than does the woman herself. In reality, alcohol and drug treatment is but one of a number of issues in which Mrs. Ford became a world-recognized trailblazer by simply being herself – which is to say, someone who spoke out honestly and rationally.

With her death at 93 on Friday, Betty Ford should command respect, not for the coincidence of being married to the only president who was never even elected a vice president, or that she survived cancer, alcoholism and chronic osteopathic pain to become the third-longest-living first lady in history (Bess Truman died at 97, Lady Bird Johnson at 94), but rather for what she did with the public role she was thrust into and the values of justice and compassion she exemplified all her years.

It might also be easy to label her a middle-American, middle-class political housewife who burst into prominence. She told me, however, that during her childhood Eleanor Roosevelt and her frank public opinion on a variety of political issues was just as important a role model for her as her own mother, who'd introduced her to the needs of disabled children. Volunteering as a young teenager in local clinics and hospitals where those with disabilities were treated, she taught them confidence and grace through the movement of dance, which she'd already had considerable training in. That passion drove her to pursue the rigor of training with the then-radical theories of modern dance with the legendary Martha Graham herself. She supported herself in a Greenwich Village walk-up by working as a print ad model. Later she saw to it that the modern dance movement leader was given the respect shown the traditional performing arts with a Presidential Medal of Freedom.

In the brief sweet spot of the so-called Me Decade that marked her tenure as first lady, an era that also saw the mainstreaming of "personality" and traditional gossip columns with the creation of People magazine, Betty Ford deftly managed to shape her public persona directly from her private person, drawing on real experiences from a life never intended to be nationally broadcast. When she had breast cancer and a mastectomy, she went against tradition to publicly disclose the details because she recognized the visibility of her persona might save the lives of millions of other women who were living with it undetected until it was too late. She spoke openly about the value she'd gained from seeking the professional services of a mental health therapist and broke another taboo, hoping to reduce some of the stigma against it. She discussed her first marriage and divorce.

Her support on a variety of other women's health-related issues -- including lupus and a woman's right to make decisions about their own bodies (she was careful to never endorse or criticize abortion but to instead support a woman's right to that choice) -- was at the core of her conscience, stemming from an ironclad belief in the equality of women and men. This conviction also emerged from personal experience. Before, during and after her first marriage, she had earned her own living as a women's clothing buyer for a large department store and an assembly-line frozen-food factory worker.

As with the other issues she championed, her belief in a woman's right to full legal equality emerged from her own personal life. When her first husband fell ill with what threatened to be a lifelong illness, she realized that her ability to financially support him was compromised by the lack of equal pay for equal work. Thus, when she became first lady she quickly rose as the national leader of the fight for the Equal Rights Amendment to the U.S. Constitution and lobbied state legislators and governors in hopes they'd at least permit floor votes in the statehouse and thus move the debate closer to passage. She continued that fight as a former first lady and even when it was defeated in 1982, raised the value of an effort to try again in later years.

On the historic night of Aug. 9, 1974, when she'd been thrust into global headlines as her husband Gerald Ford assumed the presidency upon the resignation of Richard Nixon, she went home and made lasagna for her husband, four kids and daughter-in-law and began sorting through the stuff in their den and bedrooms, figuring out what they'd take from their suburban Virginia home across the Potomac River to the big white mansion they'd call home for the next three years. Her close-knit family was an important part of this feminist's person and persona as well. Instead of dismissing personal questions on whether her sons used marijuana or her daughter was likely to have an affair, Betty Ford spoke of the natural curiosity kids had for weed – as her generation did for beer, she said -- and suggested that living together before marriage might help couples decide whether they'd work as spouses.

She also offered her opinion on other hot-button issues of the era that hadn't affected her, supporting strong gun control laws, anti-discrimination against gay men and women, and later, a compassionate understanding of those with AIDS. Some of this may have shocked the nation, but it never shocked her husband or kids, all of whom knew and loved her because she was frank – and complex.

She was as deeply a traditional Episcopalian as she was a revolutionary feminist. She was as proud of raising four children into adulthood who remained devoted and respectful of her as she introduced modern dance to her conservative hometown of Grand Rapids on the steps of the local Baptist Church. She could put on the white gloves and hat – and some dramatic and colorful evening gowns for state dinners -- but also enjoy a night at Studio 54 with the chic and fashionable or a chat with truck drivers with her own CB radio handle of "First Mama." She could tour Europe in conservative capes, mood ring on her finger, or kick off her heels in a dance class in China or soft-shoe on the Cabinet table. She was a Republican of the type now vanished, whose first loyalty was to the old Lincoln principle of civil rights for African-Americans and equal rights for women, but never went blind as a partisan. Among her closest relationships with those few who numbered in the world's most exclusive sorority were Democrats Lady Bird Johnson and Rosalynn Carter.

While it's true that we'd have never felt the impact of Mrs. Ford had she not happened to be married to the man who became president, it is also a fact that had she not made three decades of sacrificing her own ambitions to his, he'd never have been able to rise politically as successfully as he did. And in all the historic facts and firsts reviewed in the flush of stories about Betty Ford, none have mentioned the most glaringly obvious. In his inaugural address on taking the oath of office, just after Nixon left the White House, Gerald R. Ford became the first and only president to credit his wife.

Carl Sferrazza Anthony is the author of several books, including the two-volume history, "First Ladies," a history of the role's evolution and political power, and individual biographies of Jacqueline Kennedy, Florence Harding and Nellie Taft. He is also Historian of the National First Ladies Library. You can read more on his website.

Carl Sferrazza Anthony, is the author of several books including the two-volume history, "First Ladies," a history of the role's evolution and political power, and individual biographies of Jacqueline Kennedy, Florence Harding and Nellie Taft. He is also Historian of the National First Ladies Library. You can read more at his website.