A guilty liberal confronts her stuff

Lately, I'm torn between recycling my old things -- and becoming a hoarder who can't throw away junk 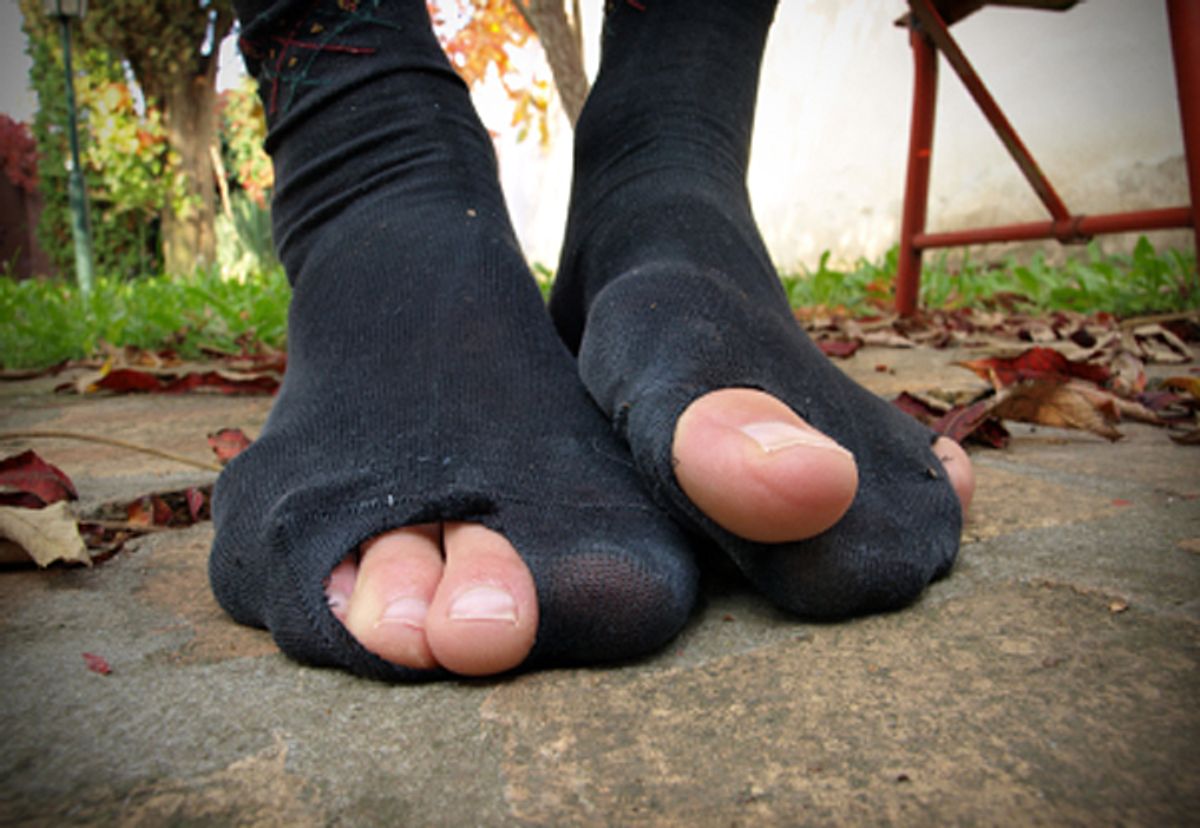 Have you ever spent 10 minutes staring at a box of discolored envelopes?

I have. Rest assured: I'm confessing here, not bragging.

Just the other day in my home office, I froze dumbly before a white Pottery Barn bookcase that doubles as a supply cabinet. My cat Waldo eyed me suspiciously from his nearby window perch, as if I'd lost my mind. He was probably right. I was caught in a heady internal debate. Was it more responsible to recycle the yellowed, unusable envelopes in my cabinet, as they monopolized space inside? Or would that act be wasteful? Maybe I should save a tree and try to use them for origami? After all, earthquake and tsunami victims in Japan might be entirely without stained office supplies!

What was worse: wasting paper or wasting space? I was stuck. And paralysis was becoming a familiar repose. I was definitely wasting something -- my afternoon.

These days, we're expected to be environmentally responsible. If you don't want to be thought of as heartless, ignorant or, even worse, ultra-conservative, then you know the routine: Recycle, eat organic, drive hybrids, reuse metal water bottles, repurpose packaging, save documents in cloud space, compost and grow backyard and rooftop victory gardens. Well, maybe you do that. I actually murder plants.

But at the same time, we get frequent warnings not to let this "saving" and "repurposing" create clutter. The popularity of shows like A&E's "Hoarders" and Style Network's "Clean House" -- not to mention the entire HGTV network -- suggest a culture that desperately needs to get rid of its junk.

And what we do keep -- from photographs to scuba gear -- must be streamlined, organized or filed, if not digitally, then in recycled cardboard boxes or sustainable wooden cabinets handmade from naturally felled maple trees by blind Peruvian shamans. Our ideal homes resemble modern art museums with an antique touch or two to broadcast our bohemian roots. The message is clear: "Stuff" drags us down. (And "stuff," by definition, does not include Apple products.)

But how do I make use of old things without living amid clutter? How can I make, say, a creative planter out of an old tire without first storing that tire in my garage? That's the source of my angst lately: How can I throw something out -- and put it to good use, too?

For me, this tug-of-war is nothing new. I was raised in a minimalist home by contemporary art world parents. (And, yes, I'm aware I make that sound like a condition. You would too if you had to sit on such uncomfortable chairs.) The immaculate design was geometric and spare with bursts of Alessi color from fluorescent orange nail clippers to acid green garbage pails. My parents discarded objects without sentimentality. They once threw out my Social Security card and, when confronted, shrugged: "You can always order another."

My only living grandmother, Nana, was the opposite. She collected antique spoons, model shoes and truly creepy google-eyed baby dolls. Teasingly dubbed "the original flower child" by the family, she hocked knickknacks at flea markets, grew dahlias, picked berries for jam and knit blankets from balls of yarn, inevitably bought on sale. She saved Cool Whip bins in which she froze enough roasted turkey to feed an African village. And I can tell you from experience: There is nothing more disturbing for a child than opening a container with the expectation of whipped cream and discovering meat.

Though I inherited my mother's discount-free taste, sometimes I related to my grandmother, too: I collected soaps, quarters and Strawberry Shortcake dolls and set them up as art installations to photograph in my childhood bedroom. Even as I derived incomprehensible pleasure from ogling my goods, though, I wondered what in the world was the point of such a collection. Why did I like them?

My grandmother's health is just now truly failing and, lately, I sit at her bedside considering these lifestyle choices. What's more beneficial to myself and to the world: a clean, calm, beautiful space or compiling every scrap to use and enjoy? What if I'm not capable of either?

At the supermarket checkout line, I stall for time. Do I choose plastic and enlarge a landfill, paper and kill a tree (while enduring judgmental glares from the Whole Foods checkout guy, who emits his own air pollution thanks to ineffectual natural deodorant) or bring hemp totes from home and accept "nerd!" taunting from my husband. When I clean out my closets, I'm loath to discard objects that might later come in handy. I rationalize: "I'll eventually use those enormous solar operated headphones from that weird gift bag, right? These ballet flats don't fit now, but I'm sure they might one day when it's really cold out and my feet shrink!" Score one for Nana's team.

My husband Andrew feels so guilty about trashing old items -- from tufts of gray contaminated fuzz once known as "pillows" to incomplete decks of cards -- that he actually eulogizes them, thanking them for their service as he drops them sadly into the ugly plastic garbage bin. The other day, Andrew displayed a sock-clad foot with massive holes exposing his heel and big toe. He announced: "I need to go to the sock repair man."

When I gestured toward the garbage, he shook his head. "Have some respect! These socks are vintage. They're older than you!"

Witnessing Andrew's pack-rat habits sends me into disposal mode. I regularly throw out his Swiss cheese socks. I gave away those weird solar headphones. After all, I don't want to live like "Hoarders" subjects, who discover dead pets behind six broken-down stoves. But then I begin to fear the pendulum swinging too far in the other direction: One of my best friends is a professional organizer (code for OCD) who threw away all her skinny jeans after putting on some happy weight in a relationship. Months later, after the breakup -- nature's best diet -- she was back to her old size with nothing to wear.

I suppose we are all a product of the time we live in. My grandmother emerged from the Great Depression, when squirreling away items for future use was tantamount to survival. My parents' generation was rebelling against the chaos of antique collecting and bargain shopping with sharp lines, geometric shapes and clean surfaces. And I suppose my dilemma between tossing and collecting shows the conflict we face today: We're living in an environment that is fragile and overburdened, in the midst of a recession, no less, but as good American consumers, it's hard not to just want the latest upgrade.

Me, I want the immaculate home and the wild backyard garden. (I also want this season's Chanel lip gloss.) So I guess I will just try my best to find a balance. I throw away old socks and don't feel guilty. I can have garage sales and let other people hoard my junk. I can donate to charity organizations. I've decided it's OK to discard those yellowed envelopes, as long as I do it via the recycling bin.

At least I'm not spending hours stressing about it. Because time is one resource none of us can buy again or recycle. Every generation can agree on that.