What Anna Deveare Smith can teach us about dying 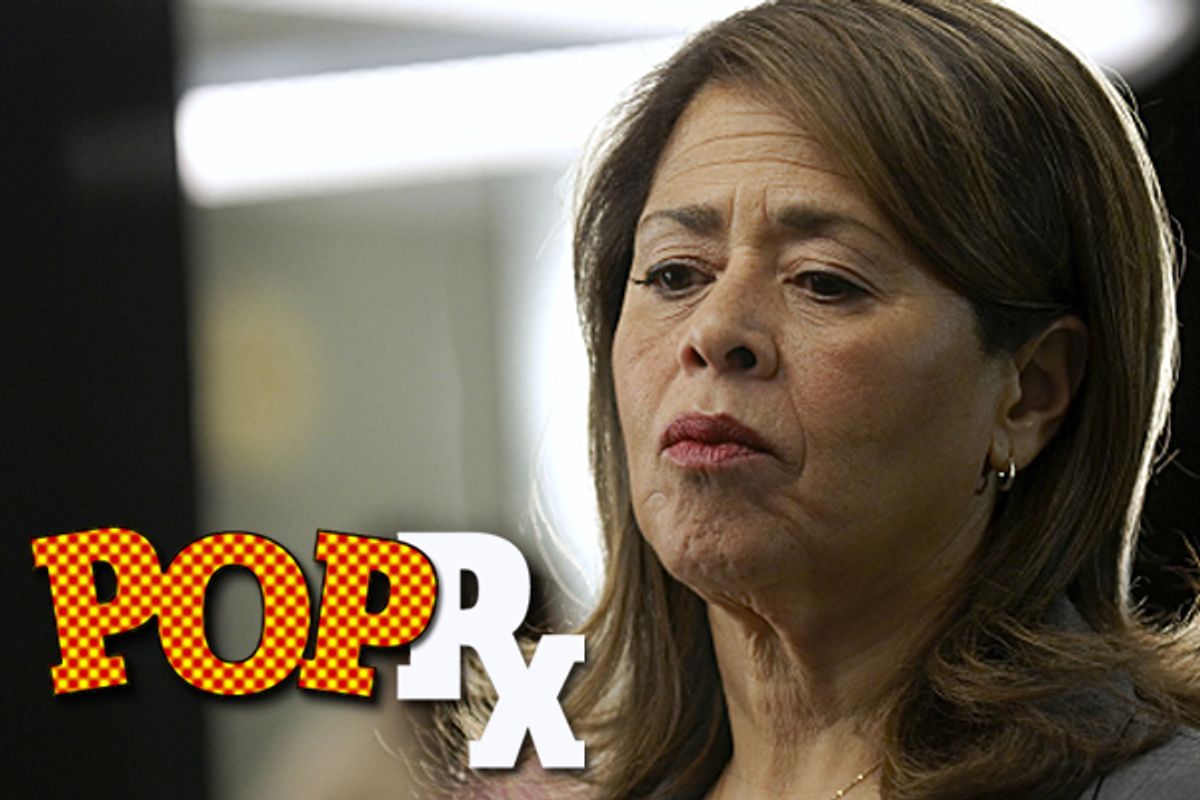 Chances are you've seen some of Anna Deveare Smith's performances over the past decade. From her recent turn as hospital administrator Gloria Akalitus on "Nurse Jackie" to her portrayal of the president's national security advisor on the "West Wing," the actress has become a fixture of smart TV.

Although less well-known, some of Smith's most critically acclaimed work has unfolded onstage, a medium for which she has written and performed a number of one-woman shows. In her latest work, "Let Me Down Easy," she portrays 20 characters ranging from Lance Armstrong to former Texas Gov. Ann Richards to a Buddhist monk to medical residents in New Orleans. The play, which she is currently touring around the nation, explores how individuals struggle to survive not only terminal illness but also our nation's flawed healthcare system.

Smith began mulling this piece over a decade ago, when she was invited to Yale Medical School as a visiting professor. There, she interviewed and then portrayed real patients, doctors and administrators as part of an educational lecture. Intrigued by the idea, she went on to interview more than 300 people in preparation for the current iteration of the project.

Her efforts have paid off. The actress's in-depth exploration of the doctor-patient relationship results in the most sensitive, informed and emotional work of art I've ever seen about health and America's medical system. In short, if you're a human and you've accepted the fact that you will, at some point, face death, you should see this play. (If you can't make it in person, PBS will be airing it on Great Performances later this year.)

During her recent stint at the Berkeley Rep, Smith and I sat down to talk about the play and what's she's learned about doctors, patients and healthcare in America.

What do you want "Let Me Down Easy" to tell us about death and dying?

It's not a show just about dying. The play also has a social justice mission to make it clear that if you have a lot of resources you can get care, but if you don't, you'll be forgotten. It's not just about death. It is also about how we live and how we care about each other or not, and who we care about. In terms of death, the play is extremely personal. I'm looking at each member of the audience as a partner in excavating meaning, because more than any other play I've done, I understand the audience is bringing very personal material along to watch this play. So it's a more intimate experience. I don't know what it is for each person, but I hope that the play gives them the opportunity to work through how they live and how they take care of the people they love.

You mention social justice. The play is going up during the early phases of healthcare reform. Did that affect the production?

The play started a long time ago -- at Yale in 2000. Health reform was not a national issue yet. At first, it was just about hearing how patients communicated. I also cast a wide net, looking at the issue around the world.

But when it was time to bring the play to New York, President Obama was rolling out healthcare reform, and that was when I decided to make it a companion piece to the national political debate on healthcare. I wanted to show the human side of the story and cause audiences to talk about how these issues affect them in their daily lives.

Have you had any feedback from leaders on either side of the political aisle?

In Washington a lot of politicians came. Secretary [of Health and Human Services Kathleen] Sebelius invited me to do parts of the play for her staff; Francis Collins, the head the National Institutes of Health, invited me to come and perform there; Supreme Court justices came; a lot of people from the White House and from the president's Cabinet came to see the play. What I hope the play did for them was to inspire them to keep doing what they're doing. The play isn't legislation, but it does move hearts and minds.

Getting back to the play's theme of illness and dying: At the end of the play, you portray a Buddhist monk who has a clear, simple -- almost fatalistic -- way of looking at death. How does this compare to the popular view of death in America?

To me the words that mean the most is when that monk says we think about death all the time. But not at all in a morbid way. Rather, he says it just to give all of its richness to every moment of life.

As opposed to our own view, which is to fight to the end?

Well, the prevailing American idea, which would not be a Buddhist idea, is exactly to fight it to the end. We in particular don't look at [death] or deal with it. But this may be tied into something that is positive about America: the notion of hope and optimism.

How do you think the play affected your own view of doctors and modern medicine?

Medicine itself is a culture and profession. What is clear to me is that science is essential to medicine. But just because you're a great scientist doesn't make you a healer. Yes, you might be able to fix something, but it doesn't mean you can heal a person. I think more health professions may evolve that have more to do with healing as doctors have more and more obligations to keep up with science. As one doctor I talked to said, "We can see inside cells, we can see inside genes, we can do all kinds of things that we never could do before, but it doesn't mean that we have the capacity to look at the whole person and understand that a disease shatters a whole person's life."

Doctors are often viewed either as saviors or witches. Is there a reality behind this?

Doctors are extraordinarily educated people. When I've sat with doctors for interviews, I'm impressed at how refined their intelligence is and how analytical they are. I find doctors among the most compelling professional people I've ever talked to.

I did read once that society invests in the education of doctors, and if doctors aren't really going to take care of people, then maybe we should rethink that donation we make to their education. Doctors are in the public trust, and even though they have the public trust, they now have a lot of distrust.

It is probably because of the extent to which medicine is in the marketplace. There's a dollar sign to every moment of care you get, and [that system] doesn't seem to be working very well. It doesn't even allow doctors -- many of whom came into the profession because they do want to heal people -- to be their best selves. I don't need to tell you about the need we have in primary care. Folks would rather do plastic surgery or something else that won't wake them in the middle of the night and [that's] going to make a lot more money. That is a sign of skewed values in our culture. We don't have a culture of service. We have a culture which is about trying to get as much as you can financially.

What can doctors do to better communicate with their patients?

The other thing I found profoundly offensive about doctors and probably kept me away from them is that they have no interest in what your own struggle has been with your health. The first thing the doctor who wants to communicate with a patient needs to [think] about is what it means to open him- or herself up to this human being. And if he can't do that, then maybe he needs to work with someone who does, so patients can have a better experience.

Can these skills be learned?

I think they can be learned. When I was at Stanford, I taught acting and I had lots of young people in my class who were scientists. I saw an artistic side. One of my own doctors is a concert pianist who plays at Carnegie Hall. Doctors are multitalented people who do extracurricular activities that speak to a lot of passion. So I think it can be taught, but [it won't] work if we're not realistic about how many hours there are in a day. One short-term solution is to focus on teams, so that if one person is the plumber, so to speak, then someone else gives them a feeling of well-being.

On "Nurse Jackie," you play a hospital administrator, Gloria Akalitus. The stereotypical administrator's interests are usually opposed to those of the patient. The patient wants the best care, and administrators are portrayed as the ones who are trying to limit care and ration resources. How is this role different than the ones you portray in the play?

Gloria Akalitus is very multisided character, and has a bigger heart than she appears to have on the surface. I always like to say that I bet she teaches kindergarten at Sunday school. I'm sure she's active at church. So she is a complicated woman. I feel I know her, and the people I base her on are these tough African-American no-nonsense women who raised me. Most of all, Mrs. Akalitus has profound sense of service. That's the good news about her. Does she come across cold? Yes. Is she representing the system? Yes. All of the characters in "Let Me Down Easy" who survive the system are those that do have lots of resources. [Former Texas Gov.] Ann Richards says it point-blank during the play -- "The first thing I thought was, thank God I can afford this" -- when she was diagnosed with cancer.

We're getting somewhere together now. It's not just about surviving the illness. It's about psychologically surviving the system.