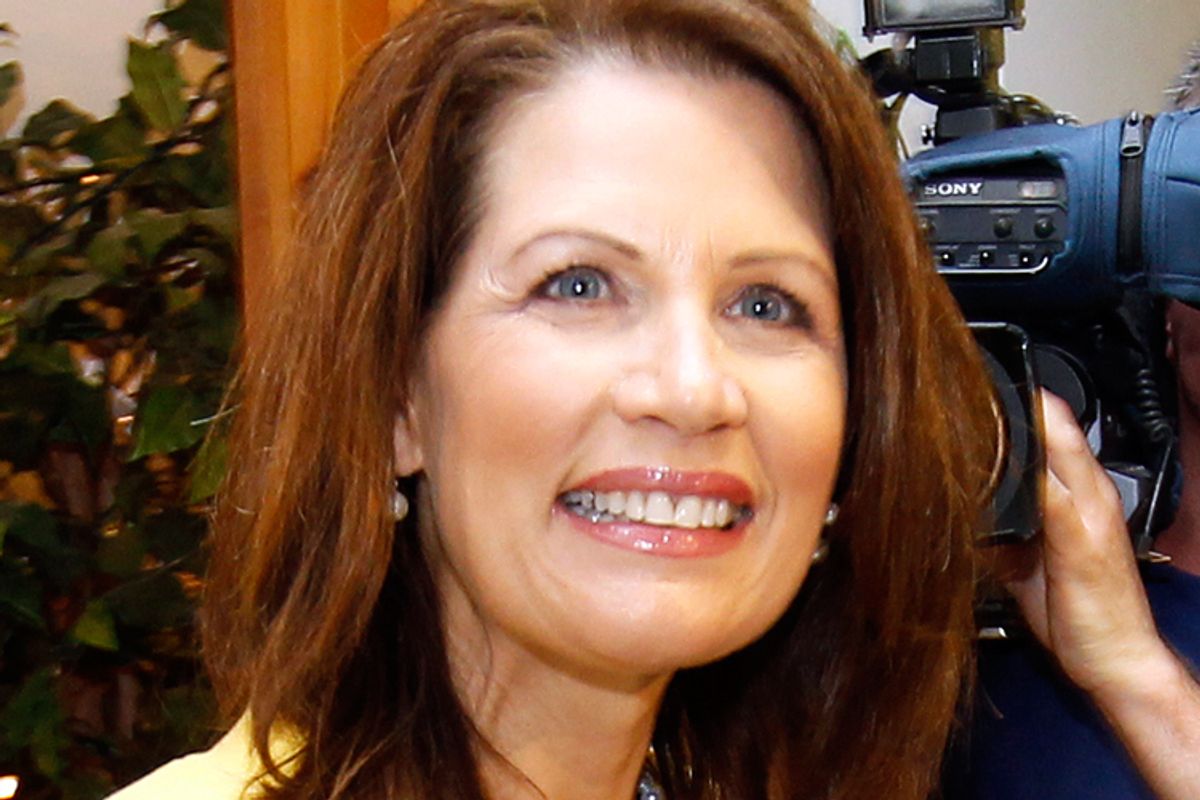 The Wall Street Journal picks up today on a bit of Michele Bachmann opposition research that various Ron Paul-supporting Internet commenters have been trying to publicize for months: The ascendant queen of the Tea Partyers was once a... tax collector. For the IRS.

Unlike her tale of being a Carter-supporting Democrat until she discovered Gore Vidal's disrespect for our Founders (or, as is more likely the case, until she became an antiabortion activist), Bachmann's IRS job isn't part of her grand conversion narrative. She doesn't hide it, but she does describe her old gig with fancy government bureaucrat talk: She was a "federal tax litigation attorney," she says. Her four years at the IRS are also the only job she's ever held outside of elected office.

Here's Bachmann's spin on the job: God, through her husband, told her to persecute delinquent taxpayers.

"'Tax law? I hate taxes. Why should I go do something like that?' " Ms. Bachmann said in 2006 remarks at the Living Word Christian Center in Brooklyn Park, Minn., recounting a conversation she had with her husband. "But, by faith, I was going to be faithful to what God was calling me to do through my husband, and I finished that course of study."

In stump speeches and interviews, Ms. Bachmann said her tax work helped lead her to the conclusion that the U.S. should "deep-six" the tax code and scrap taxes on inheritance and capital gains, stances that have made her a tea-party favorite.

There are publicly available documents from only one case Bachmann worked on: a judgment against a resident of the White Earth Reservation who believed that the federal government's treaty with the Chippewa Indians shielded part of his income from taxation. (Unlike most Tea Party folks and all "sovereign citizens," this guy had a point! But he lost. Thanks to Michele Bachmann.)

The tax collector business has been brought up on the Ron Paul forums by Paul supporters who are clearly irked that "Tea Party" candidates like Bachmann (and former Fed employee Herman Cain) are stealing grassroots attention from their preferred insurgent candidate. ("Bachmann was a tax prosecutor for the IRS - I can't think of any professional less desirable to the tea party.")

But, there is a clear difference between Ron Paul and Michelle Bachmann. While Dr. Paul early in his career practiced medicine and delivered thousands of babies.

Michelle Bachmann was a tax lawyer for the IRS and has a post-doctorate degree in Federal Tax Law. She has stated that she represented the IRS in hundreds of cases against American citizens.

That is a clear difference! (The comments on that post are also priceless. "IRS/Federal Reserve: Two NWO people right from the bowels from hell.")

Will this be a "thing"? Will it sink Bachmann's surging candidacy? No, probably not. She is invincible, remember?