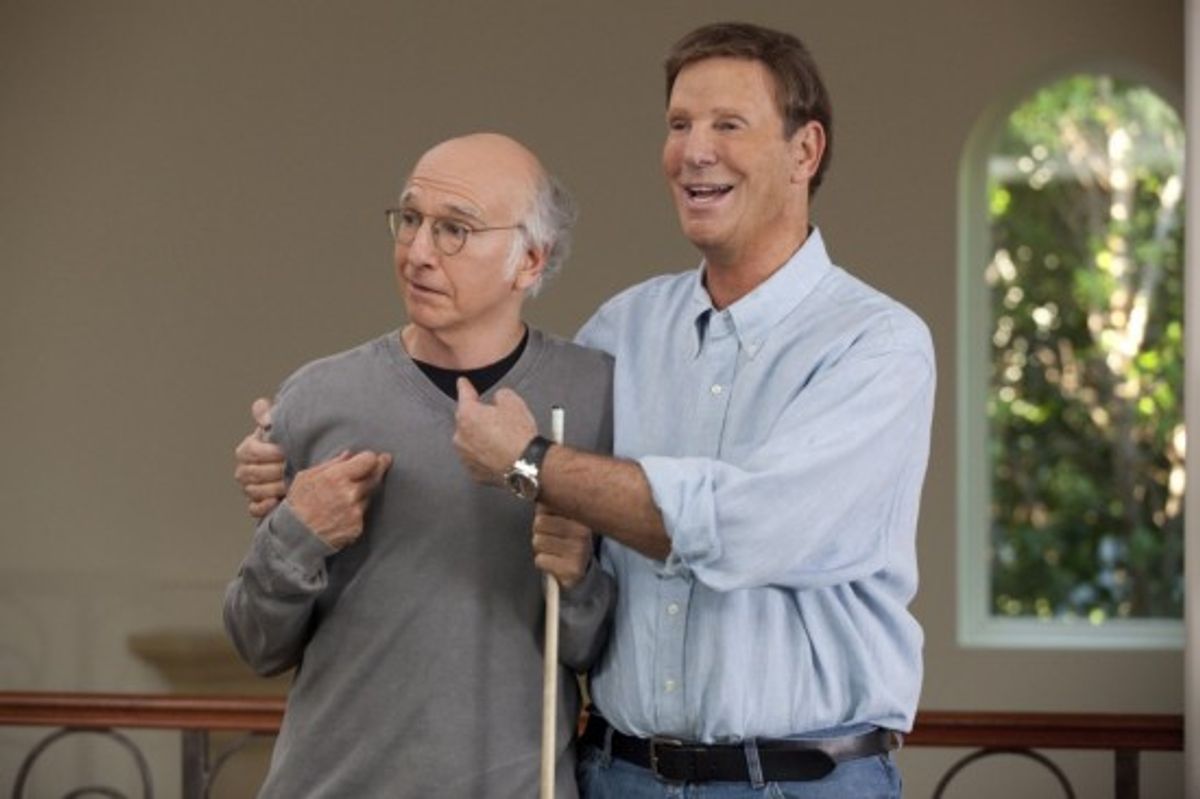 I'm such a fan of "Curb Your Enthusiasm" that I don't believe that creator-star Larry David and company have ever made a truly bad episode, and that if it were possible to measure the quality of their output on a meter, the high end would be marked "genius" and the low end "pretty, pretty, pret-ayyyy good." That said, there were way too many moments in last night's Season 8 premiere when you could hear the needle clanking against the left-hand side of the dial. My fellow Anton Egos were perturbed and concerned when HBO sent out a DVD screener that featured episodes three, five and nine, but not the premiere. This is not an unheard-of development -- sometimes for whatever reason the showrunners keep tinkering right up until deadline time. Still, if you like a show, you worry about this kind of stuff -- and in this case the worries were justified. "The Divorce" had some sterling lines and moments, but it was forced and weak overall, and mainly interesting as an object lesson in the downside of long-form TV storytelling.

David and company have a pret-ayyy good (last time, I swear) track record of building season-long arcs that make you glad you invested your time. But when you make series TV this way -- especially Larry David-style satire/farce that relies on intricate, parallel subplots and clockwork setups and payoffs -- it also requires you to line up individual episodes up in a particular order, then stick with that order come hell or high water, because even if certain chapters are weaker than the others, if you shuffle the chapters or axe one of them, the long-form plot turns to mush. David and the gang aren't dumb. They had to know they were opening with a substandard episode. But because they'd embedded crucial plot twists in its various scenes and sequences (such as the finalizing of Larry and Cheryl's divorce and Larry's eviction from his house), they had to air it.

I liked the business with Larry accusing his lawyer, Berg, of passing for Jewish when he was actually Swedish. (Larry: "I got a Swede lawyer? She's gonna get everything!") The opening "Do you respect wood?" scene offered some clever callbacks to earlier episodes. And I liked the resolution of Marty Funkhouser's (Bob Einstein) vacation conundrum, which set up a couple of horrible, wonderful events in this season's certifiably brilliant third episode. (Yeah, yeah, I know, I shouldn't have watched episode 3 without having seen episode 2 -- but HBO didn't send out episode 2, so what else could I do? Plus, I needed to be reassured that not every episode was going to be as disappointing as last night's.)

Still, ugh. Most of the theoretically outrageous, "Curb"-worthy moments of madness -- O'Donnell's Girl Scout daughter getting her first period while selling cookies to Larry; the fortuitous intervention of the truly Jewish and secretly incompetent lawyer in that "all you can eat" showdown; Larry, a busybody supreme, improbably claiming to be uninterested in the finalization of his divorce papers, paying the price, and ruining another man's divorce along the way -- were well beneath the show's standards. As in certain late-period "Seinfeld" episodes, you got the feeling that the gags were driving the story rather than the other way around. (Did this entire episode come about because somebody thought it would be hilarious to end an episode with Larry lying on his back with a tampon stuffed up his nostril? God, I hope not.)

Anyway, here's what you need to know about that third episode, which I'll review in detail when it airs: (1) it airs July 24; (2) it injects such "Seinfeld"-worthy phrases as "verbal texting," "social assassin" and "no matter what" into the national vocabulary; (3) it's titled "Palestinian Chicken"; and (4) it satirizes Israeli-Palestinian rancor so rudely and preposterously that I can imagine the "South Park" guys watching it and thinking, "That's a bit much." Set your DVRs now.