Who didn't see this coming? The Speaker of the House caves on a "grand bargain" budget deal 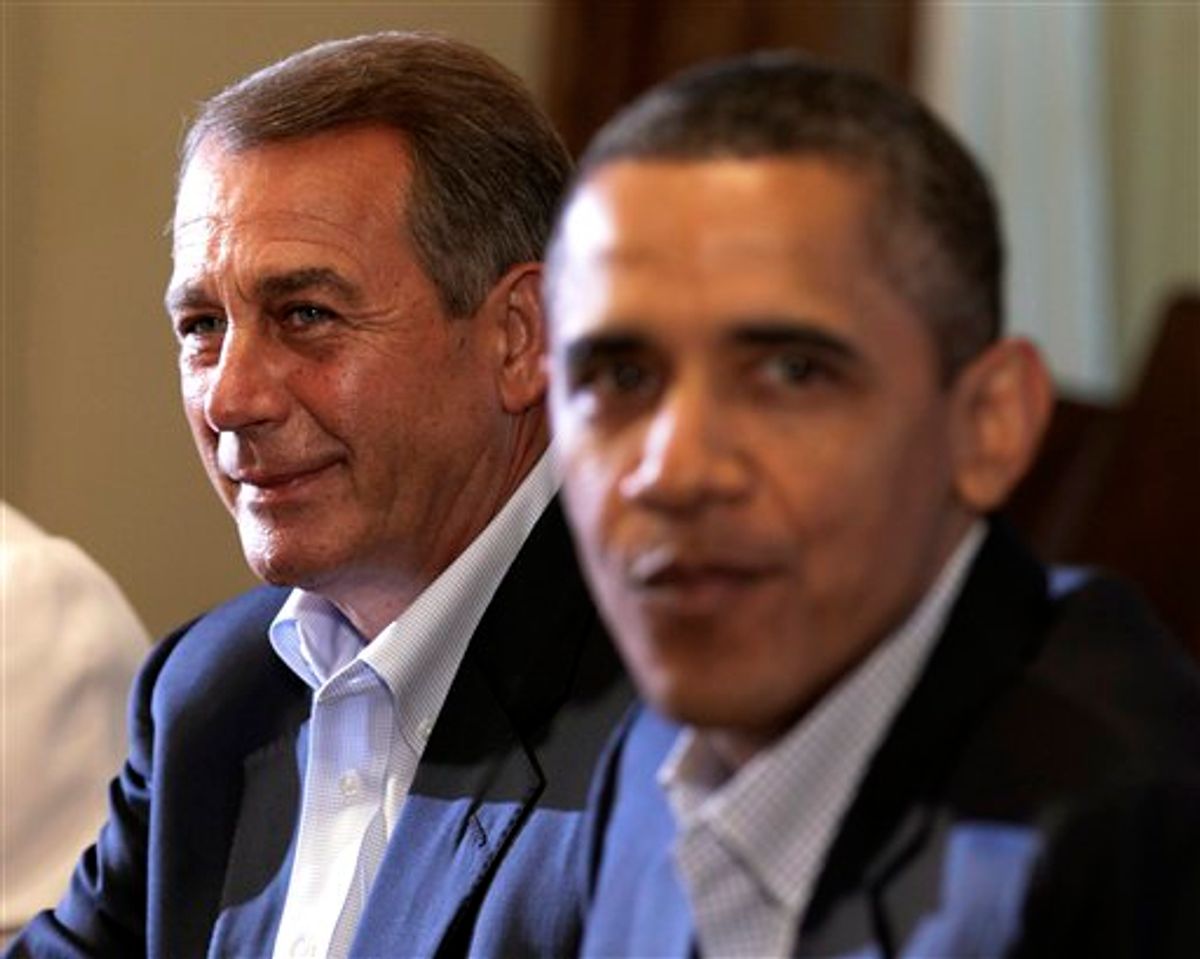 John Boehner's decision on Saturday to back away from the so-called grand bargain, in which Democrats and Republicans would agree to $4 trillion worth of spending cuts in return for $1 trillion in new revenue -- possibly even including the end of the Bush tax cuts for the wealthy -- was obviously the biggest budget showdown news of the weekend.

But is there anyone inside or outside Washington who was surprised at this development, save perhaps NBC's Chuck Todd, who was excitedly tweeting his belief last Friday that "there's real momentum for a big deal"? The inevitability of a severe backlash from House Republicans against any such compromise was entirely predictable.

In fact, I predicted it, last Thursday:

Let's step back here a second. Democrats are right to be alarmed at the prospect of big cuts to entitlements. But how do you suppose your average House Republican is reacting to the news of what would be, for all intents and purposes, a trillion dollar tax hike? I can't imagine they're very pleased, and I don't see how Boehner can possibly keep his caucus together on this issue. It's even more unrealistic to assume that ending the Bush tax cuts on the wealthy could be folded into this deal, as some reports are suggesting.

Obviously, Boehner couldn't keep his caucus together. His knuckles got rapped. The New York Times reports that during Sunday evening's summit meeting between Obama and congressional leaders, "Mr. Boehner appeared subdued at the meeting, officials said, letting the House majority leader, Eric Cantor of Virginia, do most of the talking. Mr. Cantor reiterated his opposition to a bigger deal."

The current state of play, supposedly, is a return to the so-called Biden deal, which is believed to have identified around $2 trillion in cuts. But let's not forget that the Biden deal also included a package of revenue increases that House Republicans objected to. In fact, Cantor quit the Biden negotiations and cited precisely the same explanation for his intransigence -- anything that "raises" taxes, even if that just means closing loopholes or eliminating tax breaks, is unacceptable. Since Obama's decision to "go big" was a response to the lack of progress on the smaller deal, I'm not sure I can see how the failure of the big deal makes the little deal any more viable.

The obvious and understandable temptation is to look at the spectacle of House Republicans rejecting the biggest deficit-reduction deal they could possibly dream of -- a deal that might substantially chip away at the welfare state that they hate so much -- and say, look: the inmates have taken over the asylum. But I think that's a misreading of what's going on.

The realpolitik of the situation is that in this game of debt ceiling poker, the Republican bluff has yet to be called. Time is getting tight, but we're still a ways from a crisis. And not only is the bond market not yet freaking out, but GOP hardliners also have no reason to believe that Obama will play his hand to the limit. So why should they compromise? Obama is very likely to decide that it would be the height of folly to risk "the full faith and credit" of the United States in a showdown over the debt ceiling. He has huge economic incentives to make a deal. Meanwhile, the longer House Republicans can successfully pretend that they are willing to go over the debt limit precipice, the better the ransom they can extort.

That may change if enough political heat is generated. And if we want to be optimistic, maybe it's possible that the events of the past few days could start focusing the nation's attention on exactly who it is in Washington that is behaving most irresponsibly. Much as it made progressives nervous, Obama's offer to put big cuts in Social Security and Medicare on the table did expose how shallow House Republican allegiance is to making a meaningful difference in the budget deficit.

But it's going to take more than rhetorical gestures and "grand bargain" offers to get House Republicans to crack. Ultimately, the only way I can see for Obama to win this battle is to go over the precipice himself. Just suppose that he directed the U.S. Treasury to stop cutting Social Security checks, on the grounds that he was forced into such desperate action by Republicans who refused to compromise on a budget deal that was in the best interests of the country. All he has to do is say what he said in his deficit speech a few months ago: It is unconscionable to slash away at the social safety net in order to protect tax cuts for the rich. And then say it again. And again.