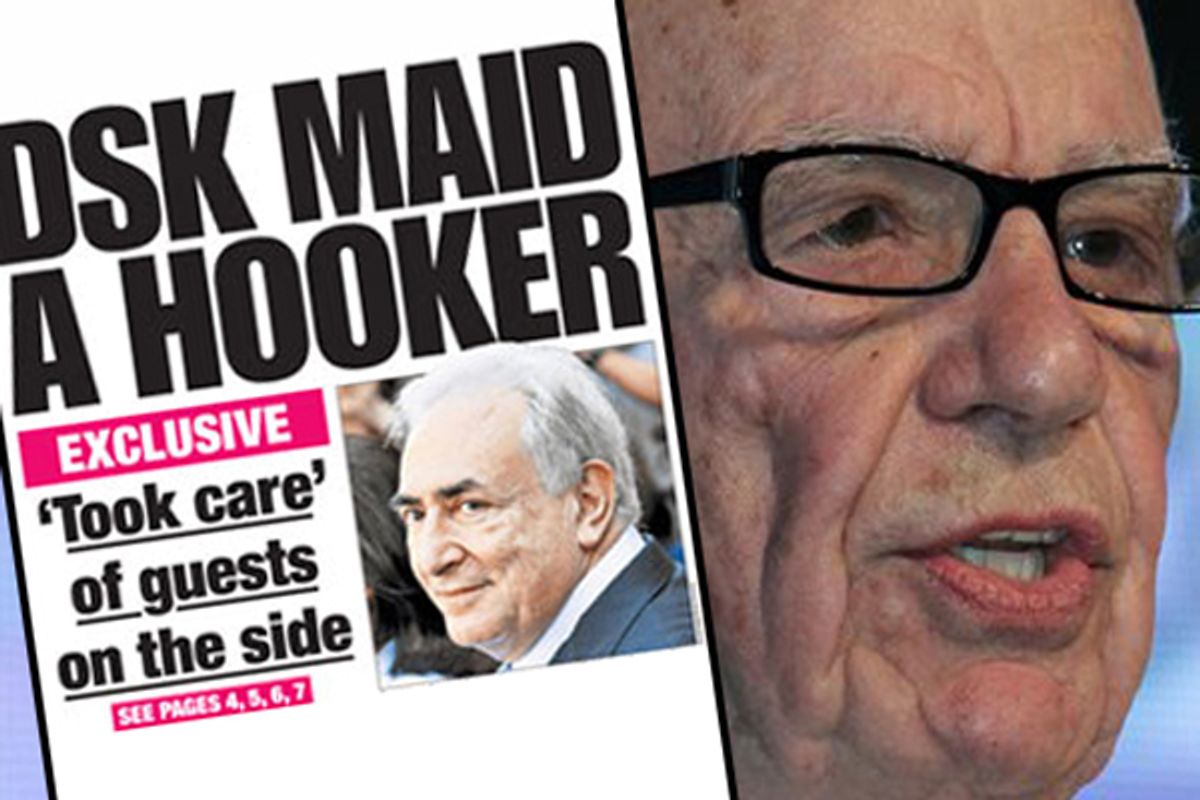 The News of the World phone-hacking scandal continues to get the big headlines, but journalistic malfeasance by Rupert Murdoch newspapers is, as we discussed last week, not limited to Great Britain.

The woman who has accused Dominque Strauss Kahn of sexual assault is suing Murdoch's New York Post, which repeatedly (and in very large type) called her a "hooker," based on the word of one unnamed source. How reliable is that source, exactly? As Erik Wemple writes today at the Washington Post, part of this source's story already looks totally false. And the Post had documents proving the source's unreliability before they published their "hooker" story, which might make the suit more interesting.

The source claimed that the woman's union placed her at the Sofitel hotel in order for her to "bring in big bucks" as a prostitute. Which is incredibly silly, as the union tried to explain to the Post before they published. They sent the Post her employment packet. Wemple:

Clues as to how the woman may have ended up looking for work at the Sofitel are in the papers. The application asks how the applicant had learned of the hotel; the woman checked a box for “Agency.” In the “references” portion of the application, the woman put down a worker with the International Rescue Committee (IRC), an agency that assists refugees with employment, among other things. When contacted about the accuser, IRC declined comment, citing policy not to talk about individual cases.

Nowhere on the form did the applicant mention a union.

Right. The Post is wrong and wholly irresponsible basically all the time, but rarely do they actually cross the line to actionable defamation. They might've, this time! (The Post could lose more money than usual this year! Plus, they just raised their newsstand price -- what timing!)

And it couldn't have happened at a worse time for Rupert Murdoch's News Corporation. The scandal in the UK has now officially spread to the Sun (the daily sister paper of the Sunday-only News of the World), which reportedly illegally obtained the medical file of the infant son of then-Chancellor of the Exchequer Gordon Brown, and the Sunday Times, Murdoch's Sunday broadsheet, which worked to obtain Brown's "legal, financial, tax, medical and police records," in addition to hacking his voicemail," using private investigators and a genuine conman.

Things have gotten bad enough that Fox Business and even Fox News has grudgingly covered the scandal. News Corp.'s planned BSkyB takeover is suddenly in trouble, News International head Rebekah Brooks is personally implicated in the reported on Brown's son, people are speculating that News Corp. may get out of the UK business entirely, son James Murdoch may actually face criminal charges, and Billy Bragg has written a pretty good topical song about the entire scandal. (The refrain references the longtime Liverpool boycott of The Sun over its coverage of the Hillsborough stadium disaster.)

This should continue to be a fun month for Murdoch "fans."