Does Obama realize that a "grand bargain" would be fool's gold?

Repeat after me: Voters don't care about deficits -- no matter what they say 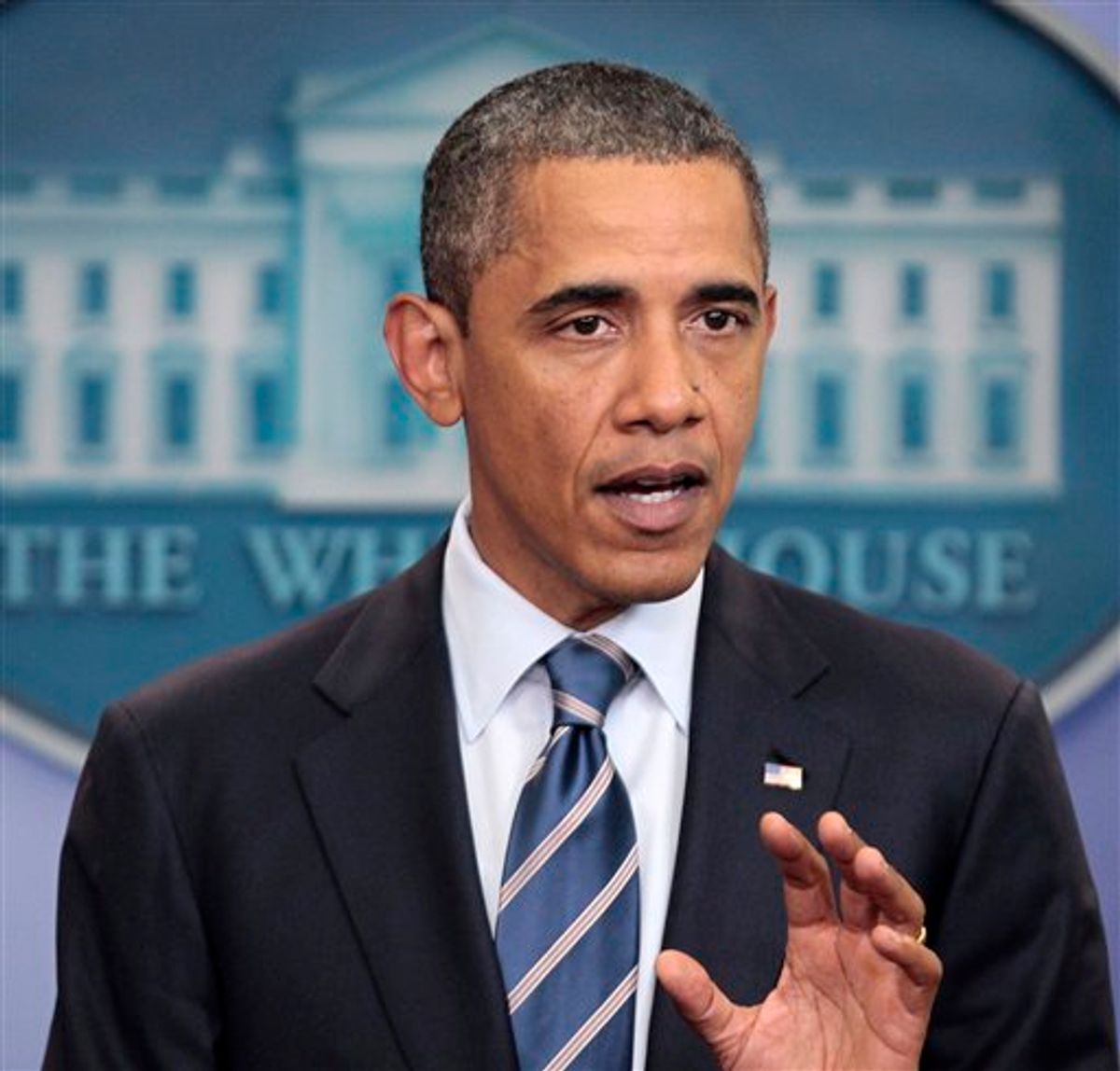 Republican leaders pretty much made it clear over the weekend that a "grand bargain" on long-term deficit reduction is out of the question right now, thanks to their base's absolute unwillingness to accept tax increases of any kind. But President Obama is apparently still pushing for one anyway. Per the New York Times:

White House officials said Mr. Obama was still determined to pursue the boldest package possible — one that would require new tax revenue as well as cuts in Medicare and other entitlement programs — but he faces steadfast opposition from Republicans and growing qualms among Democrats.

The question of why Obama, who dramatically put the grand-bargain concept on the table last week, is doing all of this is an interesting one.

A cynical -- and plausible -- theory holds that he knew when he made his "bold" gesture last week that Republicans, even if they wanted to, would never be able to go along with him, because of the more-real-than-ever threat of primary challenges (and, in John Boehner's case, the threat of a revolt that might topple him as Speaker). So Obama was free to make a sweeping proposal that involved Social Security and Medicare and to incur some wrath from his base (thereby making him appear "courageous" and "centrist"), without any risk of the GOP actually saying yes (and with the GOP looking extreme and unreasonable by saying no).

If this is the case, then it makes sense for Obama to keep pressing, as he did in a Monday morning press conference. "I continue to push congressional leaders for the largest possible deal," he declared, noting that he faces some opposition from his own party because of the entitlement issue and "strong resistance on the Republican side to do anything on revenues." Much has been written about the White House's desire to make Obama look like Washington's reasonable man, and this probably helps that effort, or at least doesn't hurt it.

But what if it's not this simple? What if this is more than cynical grandstanding on Obama's part, and he is actually willing to strike a comprehensive entitlements/revenue deal with Republicans? And what if they end up saying yes to one?

Conventional wisdom holds that this, too, would be good for Obama, given how concerned voters say they are about rising deficits -- and how much abuse Republicans have showered on Obama because of it. This view was well-expressed by Mark Halperin last Friday, when it briefly (sort of) appeared that a grand bargain might be near:

And, then, the bill will heart-stoppingly pass the House, with some secret backroom deals and lobbying that will be revealed (if ever) only long after the fact. Reps. Bachmann and Pelosi will vote against. And then it will fully dawn on Boehner and McConnell at the White House signing ceremony (likely as Obama is handing them their souvenir pens) that they were part of history, including part of the part where Obama was able to take off the table the single most damaging issue that could be used against him in 2012.

I have no idea if this is the White House's thinking, but if Obama is seriously pursuing a deficit deal and if he gets one, it will not take "the single most damaging issue that could be used against him in 2012" off the table.

Yes, polls show that voters overwhelmingly think that the deficit is a serious problem and want Obama and Congress to take immediate action to address it. And polls also show that, as a general concept, voters like the idea of bipartisanship. So if this week were to bring news that Obama has brokered a comprehensive deficit reduction deal with Republican leaders, it wouldn't be surprising if the president enjoyed a quick uptick in his poll numbers. Several days of saturation news coverage about a breakthrough agreement -- complete with Republican voices praising Obama -- can do that.

But there's a problem: Obama's poll numbers aren't low right now because of the deficit. They are low because the economy is in the toilet. As I've noted before, it is no coincidence that the three times in the past 30 years when the deficit emerged as a top voter priority all coincided with economic downturns. It's not hard to see what is happening: Voters tend to instinctively view deficits as bad things and, thus, can be easily persuaded that they are responsible for a poorly performing economy. But their concern tends to disappear as soon as the economy improves. Under Ronald Reagan, for instance, deficits soared throughout the 1980s -- but voters pretty much ignored them after 1983, when the economy began improving dramatically.

This suggests that there really is no long-term political value for Obama in striking a "grand bargain." If he were to enjoy a brief polling bounce, it would vanish very quickly, because it isn't really the deficit that voters are worried about. It's the economy, and as long as it is stuck in neutral -- or reverse-- no amount of deficit reduction will meaningfully improve Obama's chances of winning reelection in 2012.