Can Obama shame Republicans on the debt ceiling?

Floating a grand bargain with steep program cuts, knowing the GOP won't take it, is either craven or genius 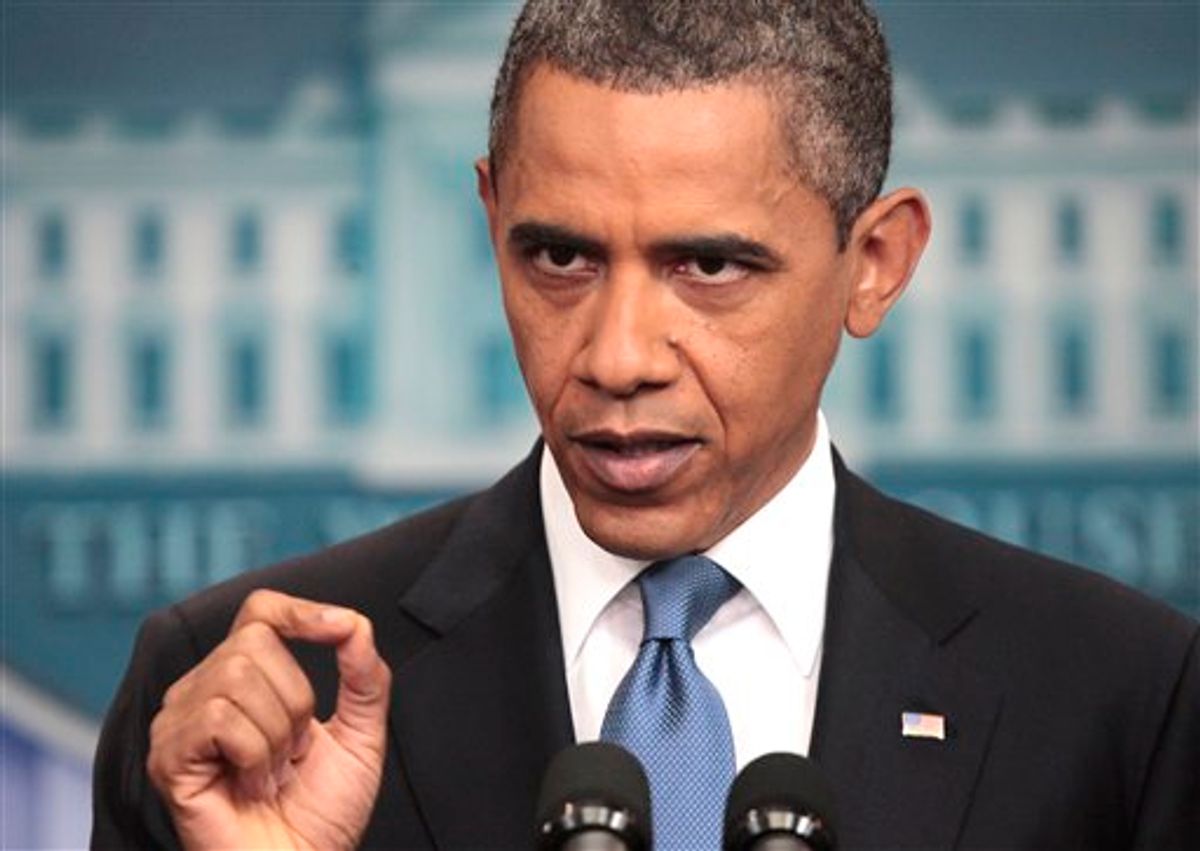 Is President Obama proving his political genius by floating a plan for a $4 trillion deficit cut deal to lift the debt ceiling, offering entitlement cuts that will enrage parts of his base knowing he'll never face their wrath, because far-right Republicans will never take the deal? It could be. House Speaker John Boehner rejected Obama's "grand bargain" Sunday and Monday, because his members won't consider anything to raise revenue, not even closing loopholes for corporate private jets or a tax giveaway for hedge fund managers. Insiders say this lets Obama look like "the only grownup," the man who was willing to snub key parts of his base for the greater good of the country, while Republicans bowed to their Tea Party and corporate masters. Everyone knows Republicans don't care about the deficit. They've already voted for the budget-busting Ryan plan, whose tax cuts increase the deficit.. This is all about greed masquerading as supply side economics that have been discredited by the experiments of the last 30 years.

I hope Obama's positioning himself as ready for big compromise, secure Republicans will never agree to a deal that raises revenue. But there's no proof either way. The president's willingness to throw Social Security and Medicare into the mix has always worried me, even if it's just political theatre. Every time this president accepts the way Republicans frame fiscal and economic issues, he moves the debate in this country farther to the right.

I didn't like it when Candidate Obama talked about "fixing" the Social Security "crisis;" there wasn't one, those had been Republican talking points for a long time. But at least Obama's proposal was to strengthen Social Security past 2037, the date is is predicted to have problems, by raising the cap on income that's taxed to fund the program. The payroll tax has always been capped at a certain point, it's currently just over $100,000. Many progressives have floated ideas to "re-start" the tax on incomes over $250,000. Obama proposed some version of that. Unless that's the deal he thinks he's driving with Republicans, Social Security doesn't belong on this table. And why tackle a problem that's more than 20 years away in a political environment that's stacked against Democrats?

The Medicare proposals that are leaking from negotiation are arguably worse. The Huffington Post's Sam Stein reports that five parties to the top-level talks say the president has floated raising the eligibility age for Medicare to 66 or 67. It wasn't long ago Democrats were talking about actually lowering the age. Medicare provides health care for seniors much more cheaply than the private market. That would be an outrage. I think it's a measure of how fully the political debate is dominated by elites that such a proposal would ever be put on the table. Sure, we're all living longer, and many of the wealthy stay healthy into their 70s. But people who've worked with their hands or stood on their feet all day for four or five decades, waitresses, truck drivers, teachers, construction workers, might not reach their golden years free of medical trouble.

Some Democrats are also saying that the president threatens to blunt the best advantage the party has going into 2012, since Paul Ryan's plan to privatize Medicare is radioactive to American voters, and Democrats had become the party committed to saving Medicare, not scrapping it. I'm not going to make that political argument. But cutting Medicare in any way other than cost-controls will make voters wonder: What do Democrats stand for, anyway? It's gotten harder over the last 30 years to tell.

I hope the president gets credit for being the great leader for this attempt at a grand bargain. But it's impossible to deny that once again, he's accepted the Republican view of the economy and what it needs. He bought into their argument that the economy's central problem is the deficit, not jobs, even though the nation's priorities are precisely reversed. It's almost exactly a year ago that David Axelrod, who had been a prominent voice for economic populism within the administration, flipped to say the president's highest priority ought to be deficit reduction. "It's my job to report what the public mood is," Axelrod told the New York Times. "I've made the point that as a matter of policy and a matter of politics that we need to focus on this, and the president certainly agrees." Axelrod's talk crushed hope that Obama might do anything to address joblessness before the midterms, and maybe even before 2012. And even though the unemployment rate has now begun to climb again, after the stimulus wore off, there are no plans to address the crisis of unemployment under discussion in the present debate. That's morally and politically wrong.

Will Americans see Obama's maneuvers as the mature leadership the country needs? Or will they blame both parties for the stalemate, especially in the still unlikely but disastrous event no deal is reached and we do default? I'd say the odds are good Democrats get blamed anyway. Already some coverage seems to be giving the president credit for compromise, but falling into an odious false equivalence, blaming "extremes" in both parties for a failure to reach a deal. There is no comparison between the Democrats and Republicans in the House. Remember that when Boehner and Obama negotiated a package of spending cuts to prevent a government shutdown earlier this year, Boehner couldn't deliver his caucus; Nancy Pelosi and Steny Hoyer had to armtwist Democrats into voting for cuts many didn't support, just to get the compromise passed. This crisis is the work of one party, and not enough people in the media are saying that squarely.

I talked about the debt ceiling crisis on MSNBC's "The Ed Show:"