Updated: Remember how outraged everyone on Fox was that GE paid no taxes last year? Funny story... 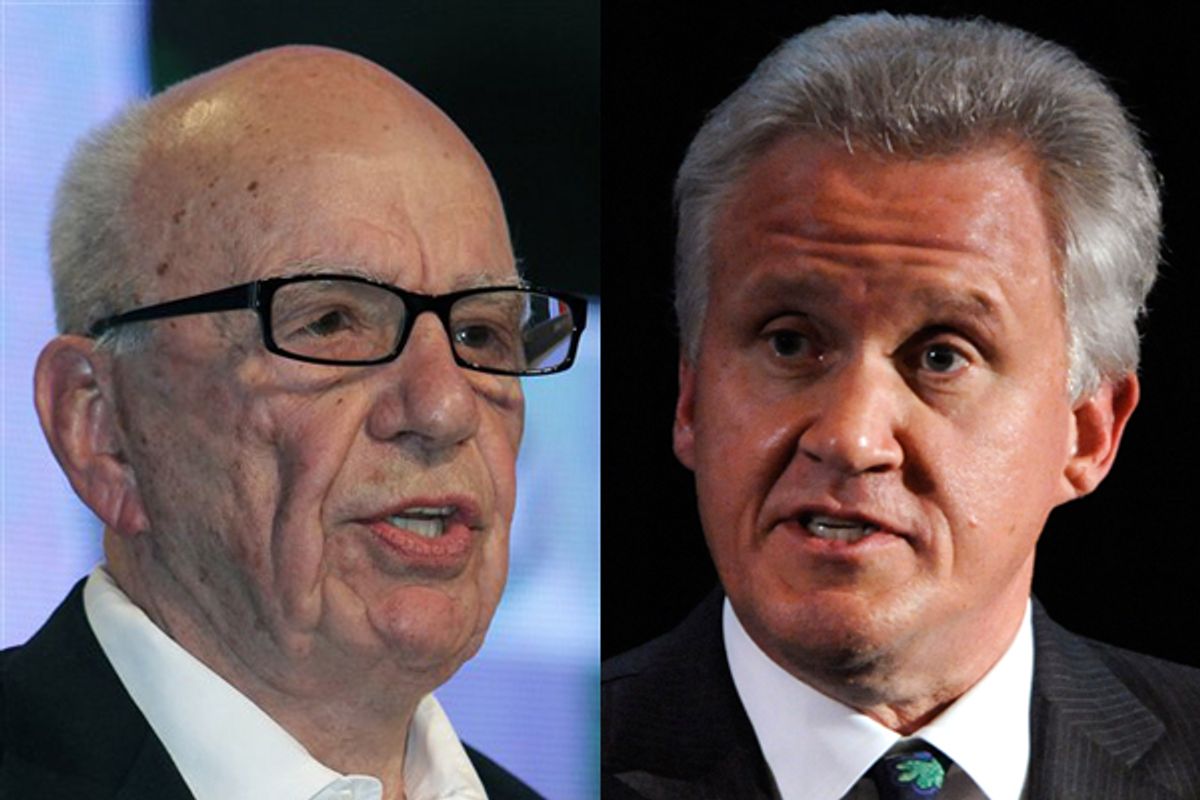 And here's a hysterical video of Fox News' "News Watch" roundtable attempting to castigate NBC for refusing to report that its parent company paid no taxes last year. The discussion ends when panelist Jim Pinkerton points out that NBC did report on GE's tax bill. The producers decide to start the segment again from the beginning, rather than have host Jon Scott look stupid:

Over the past four years Murdoch's U.S.-based News Corp. has made money on income taxes. Having earned $10.4 billion in profits, News Corp. would have been expected to pay $3.6 billion at the 35 percent corporate tax rate. Instead, it actually collected $4.8 billion in income tax refunds, all or nearly all from the U.S. government.

There is even a handy chart! News Corp.'s tax rate is apparently minus 46 percent. That is obviously heroic, because paying taxes is a crime against liberty. Also, "News Corp. has 152 subsidiaries in tax havens," which is more than all other large U.S. companies besides Morgan Stanley and Citigroup.

So! Based on how upset Fox personalities were that NBC took like six days to cover that outrageous news about its parent company's shady tax avoidance, I am 100 percent positive that Bill O'Reilly will declare Rupert Murdoch to be a "pinhead" on tonight's "Factor."

UPDATE: David Cay Johnston, the Reuters reporter who said News Corp. engineered a negative tax rate, retracted his story and apologized for the error. Johnston, easily the best tax reporter in the nation, was confused by the fact that News Corp. reversed the way it reported tax benefits and expenses in its disclosure forms in 2007. So, as Johnston now writes, News Corp. actually paid $4.8 billion in corporate income taxes for the years 2007 through 2010. However it remains the case that News Corp. "has the third largest number of subsidiaries in tax havens" among major U.S. companies, and their accounting makes their real tax rate well below the statutory corporate income tax rate. I apologize for the error.