The fiendish brilliance of Mitch McConnell 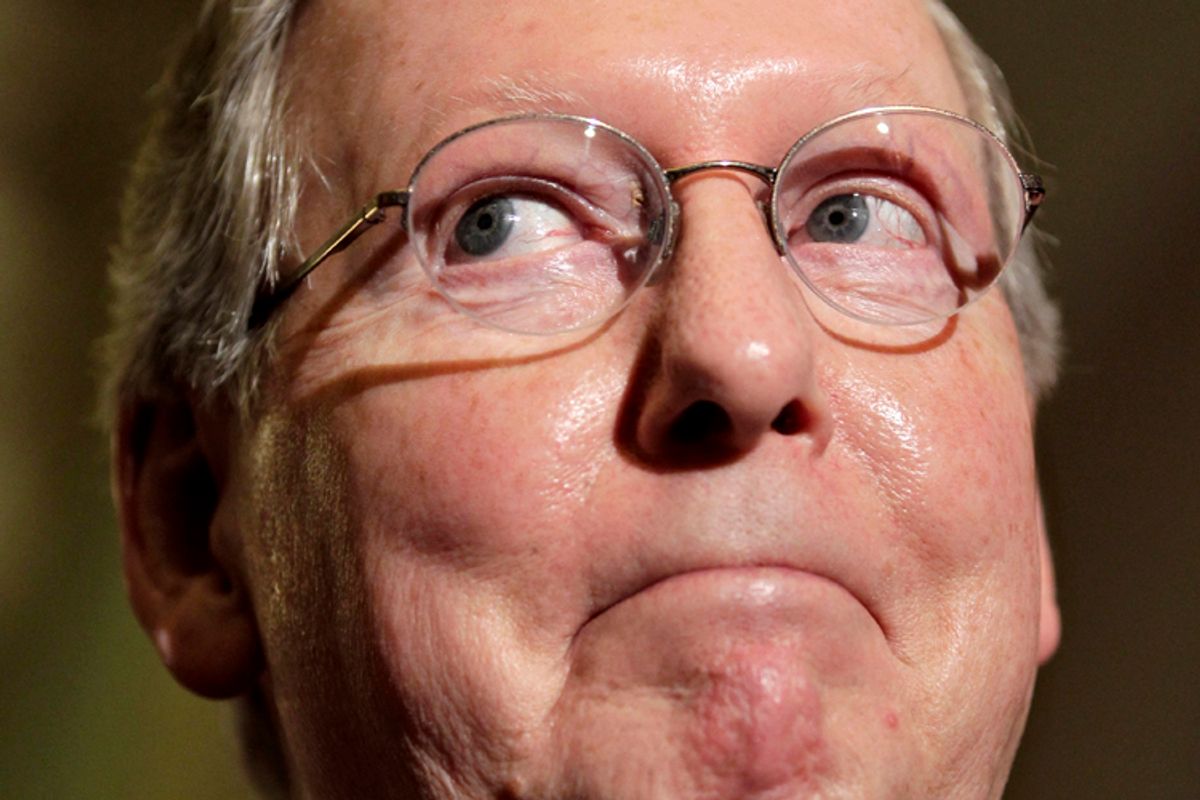 Did Senate Minority Leader Mitch McConnell just drop a bomb on the debt ceiling negotiations? Details are sketchy, but the apoplectic reaction coming from the hard-line conservative camp suggests the news trickling out is well worth paying attention to.

Here's what we know, from the Associated Press:

At a Capitol news conference little over an hour before the latest round of negotiations was set to begin at the White House, McConnell described a plan that would allow the debt ceiling to be raised in three separate stages through the end of next year, for a total of $2.5 trillion. The plan would place the political burden of raising the debt limit on President Obama and congressional Democrats, rather than on Republicans.

On each of these three occasions, Obama would request a raise in the debt ceiling and propose offsetting spending cuts. Congress would then get to vote to approve or disapprove the president's proposal.

However, in the event that Congress did disapprove, which seems almost guaranteed, at least insofar as the House of Representatives is concerned, Obama would still have the option of vetoing the "resolution of disapproval." Since it would be well nigh impossible to overcome such a veto in the Senate, McConnell's proposal essentially would allow Obama to get a debt limit increase (or two, or three!) without any spending cuts at all!

Let's take Red State's Erick Erickson as a proxy for how Tea Party House Republicans are likely to react to this news.

It Is Time to Burn Mitch McConnell in Effigy. He Goes Pontius Pilate on the Debt Ceiling.

Wow. Comparing the Senate minority leader to the man responsible for the death of Jesus Christ? In today's Republican Party, them's fighting words!

What could possibly explain this mad twist? Bearing in mind that we still don't know all the details of the mechanics of how this would work, here's my theory: McConnell is getting increasingly nervous that House GOP unwillingness to compromise on any revenue increases has put Republicans in a politically vulnerable position. As I've written before, whether you agree with Obama's overtures on entitlements or not, there is no denying that he has aggressively positioned himself as a leader willing to make a deal. The House GOP, now apparently led by Majority Leader Eric Cantor, has done the opposite.

Judging by McConnell's weird avowal over the weekend that "nobody is talking about not raising the debt ceiling," one suspects that Wall Street lobbyists are beginning to lean on McConnell. The business community, understandably, does not want to see Congress deal the U.S. economy a self-inflicted wound that crashes financial markets. With each day that goes by without a deal, Wall Street gets more antsy.

So how does McConnell get out of this box? How about by proposing a plan that assuages Wall Street and still protects the Republican ability to savage Obama on the deficit from today right on through next year's presidential election? Three separate votes on the debt ceiling are three more opportunities to rage on about "out of control spending" without every having to make any tough choices. If Obama's goal is to get the deficit "off the table" as a political issue, then this is a way to chain the president to his dining room chair.

I can't see House Republicans ever going for this: Releasing their hostages without getting a single concession in return? But I have to admit there is a wily and fiendish brilliance to it. McConnell's proposal is completely devoid of any economic merit outside of avoiding the intentional blow up of the economy; it would guarantee an endless partisan war over spending without accomplishing any real reform or debt reduction. It takes true political genius to pull off such a feat.