A toxic combination of ideology, politics and cash is poisoning America's judicial system 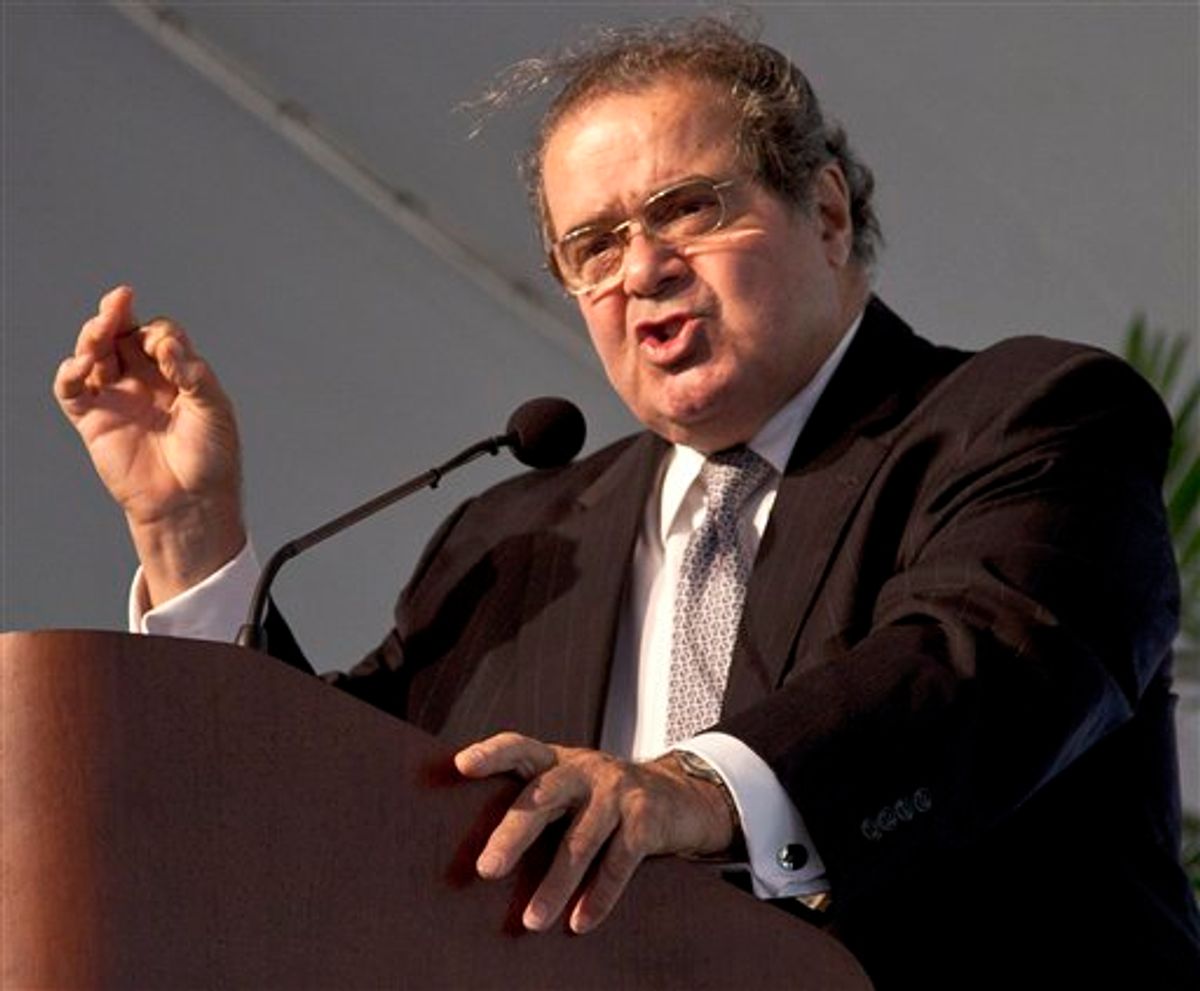 Last week, an HBO film crew was in my Manhattan neighborhood shooting a movie about legendary record producer Phil Spector, now serving 19 years to life for the 2003 shooting death of actress Lana Clarkson.

The film, starring Al Pacino, has already stirred controversy because its writer-director, David Mamet, recently said he believes Spector wasn’t guilty. "I definitely think there is reasonable doubt," he told the Financial Times. "...They should never have sent him away. Whether he did it or not, we'll never know, but if he'd just been a regular citizen, they never would have indicted him."

His remarks generated an outraged letter from a group calling itself the Friends of Lana Clarkson that began, "This film may be a valentine for a convicted murderer and 40-year gun abuser." It continued, "We are requesting that Mr. Mamet have the good sense and courtesy to write a factual and entertaining film concerning the facts. He does not need to rewrite history so soon. It will backfire on him."

Of course, their anger can’t hold a patch to the rage of those millions furious over the not guilty verdict in the trial of Casey Anthony for the murder of her baby daughter, Caylee. But whether you believe Spector didn’t do it or Casey Anthony did, the bottom line is the same: It’s your opinion, you’re welcome to it, and that’s as far as it goes. Rather than yield to passions whipped up by media and mob hysteria, it finally was up to a jury of men and women to presume innocence until otherwise proven beyond reasonable doubt -- to hear the testimony, look at the evidence or lack thereof -- and then make a decision.

In the matter of Casey Anthony’s acquittal, "Some credit a wily defense team," the superb Detroit Free Press columnist Brian Dickerson wrote. "Others blame prosecutors for miscues real and imagined. Or maybe jurors simply took their job seriously and refused to make the extra-legal leap of faith demanded by those in the bleacher seats."

Admittedly, I didn’t follow the Anthony trial that closely (or the Spector case, for that matter) until the very end. But I do know that jurors who sit for the length of a trial usually have a more thorough perspective than any outside observer, no matter how expert or camera ready. I’ve served on juries, grand and otherwise, including, several years ago, one that heard a medical malpractice suit. It went on for weeks. What was fascinating about the process was that at the beginning of the trial, all of us were completely convinced that the doctor in the case was guilty as hell. By the end, after all the evidence and witnesses had been presented, and the arguments made, we had completely changed our minds and the jurors (I was an alternate) cleared him of all charges.

Like it or not, that’s how we proceed in a democracy, and for the most part it’s worked pretty well. In the words of attorney and journalist Jami Floyd, "Our constitution balances the tension between the public’s desire for retribution against the greater societal goal of justice. The trial is the defendant shield against the societal sword of revenge."

If you have a better system, kindly tell the rest of us. "Facts are stubborn things," John Adams famously argued when he successfully defended the British soldiers accused in the 1770 Boston Massacre, "and whatever may be our wishes, our inclinations, or the dictates of our passion, they cannot alter the state of facts and evidence."

And yet on "Fox News Sunday" this week, there was Senate Minority Leader Mitch McConnell, who should know better, using the Anthony case as an example of why terrorists should not be tried by civilian courts. "We just found with the Caylee Anthony case how difficult it is to get a conviction in a U.S. court," he declared.

Never mind that the Anthony trial was a state case in Florida and terrorists are tried in federal courts, nor that, as the website Talking Points Memo pointed out, "According to the federal data, federal prosecutors had an overall 93 percent conviction rate in fiscal year 2010." McConnell simply was pandering to a base increasingly distrustful of civilian government and pissed off about pretty much everything else as well.

When aimed at juries, that anger is especially misdirected. Don’t be mad at the jurors – they did their job. Better and perhaps even more productive to level your roiled ire at judges whose objectivity increasingly is compromised by ideology, politics and cash.

On the state level, with more than 80 percent of judges in this country elected, and with money, much of it corporate donations pouring into their campaigns -- $200.4 million in the last decade -- jurists, whether they admit it or not, are under constant pressure to favor their benefactors.

And on the federal level, take a look, for one, at the U.S. Court of Appeals for the 5th Circuit, covering Texas, Louisiana and Mississippi, described by the progressive website ThinkProgress as "probably the most conservative court in the country."

Among its 16 active judges, "Emilio Garza and Edith Clement were both on President George W. Bush’s 'short list' of potential Supreme Court nominees, and Clement serves on the board of the leading organization providing industry-funded junkets for judges. Garza, who recently suggested that undocumented immigrants have no right to be free from illegal searches and seizures, is best known as one of five Fifth Circuit judges who held that a death row defendant whose lawyer slept through much of his trial was not denied his constitutional right to counsel… [Judge] Priscilla Owen took thousands of dollars worth of campaign contributions from Enron and then wrote a key opinion reducing Enron’s taxes by $15 million when she sat on the Texas Supreme Court." These, by the way, are the three who ruled last year that a high school cheerleader had no case against her school when it required that she cheer for her alleged rapist and then ordered her to pay the school district’s more than $40,000 in legal fees.

It was also last year, ThinkProgress reports, that the 5th Circuit

had to dismiss a case brought by Katrina victims against the energy industry because so many judges were required to recuse themselves that there weren’t enough judges left to hear an appeal. More recently, two Fifth Circuit judges, Jerry Smith and Eugene Davis, ruled in favor of the oil industry in a major drilling moratorium case, despite the fact that they both attended expense-paid "junkets for judges" sponsored by an oil-industry funded organization. As of last year, a majority of the court’s active judges had oil investments, even though their court is frequently called upon to resolve questions involving the oil industry.

(One subsequently divested herself of up to $15,000 in BP stock, several weeks after the Deepwater Horizon disaster.)

In May, none of this gave House Republicans the slightest pause when they included in the "Putting the Gulf Back to Work Act" a provision requiring that civil lawsuits arising from drilling in the Gulf must be heard in, you guessed it, the 5th Circuit.

But at least federal judges are supposed to be bound by a code of conduct. On the U.S. Supreme Court, adherence to the code is merely voluntary, flouted by Justice Clarence Thomas, whose conflicts of interest, along with his wife’s, have been widely reported; and Justices Scalia and Alioto, who have shown up at political events.

"The court cannot maintain its legitimacy as guardian of the rule of law when justices behave like politicians," the July 1 New York Times editorialized. "Yet, in several instances, justices acted in ways that weakened the court's reputation for being independent and impartial…

"Among the court's 82 rulings this term, 16 were 5-to-4 decisions. Of those, 10 were split along ideological lines, with Justice Anthony Kennedy supplying the fifth conservative vote. These rulings reveal the court's fundamental inclination to the right, with the conservative majority further expanding the ability of the wealthy to prevail in electoral politics and the prerogatives of businesses against the interests of consumers and workers."

Stanford Law professor Jeffrey L. Fisher told the Times, "This is a court that is, oddly enough, very suspicious of the courts as a place to vindicate rights. The hostility is amped up when it’s a civil-rights-type claim."

Next session, many say, could be "the term of the century." With possible major decisions on affirmative action, same-sex marriage, immigration and healthcare reform, the devastating impact of this right-leaning, ideological court may only get worse.