Can we blame the drought on global warming?

The media omits the bigger climate story when it reports on the huge dry spell. Here's why 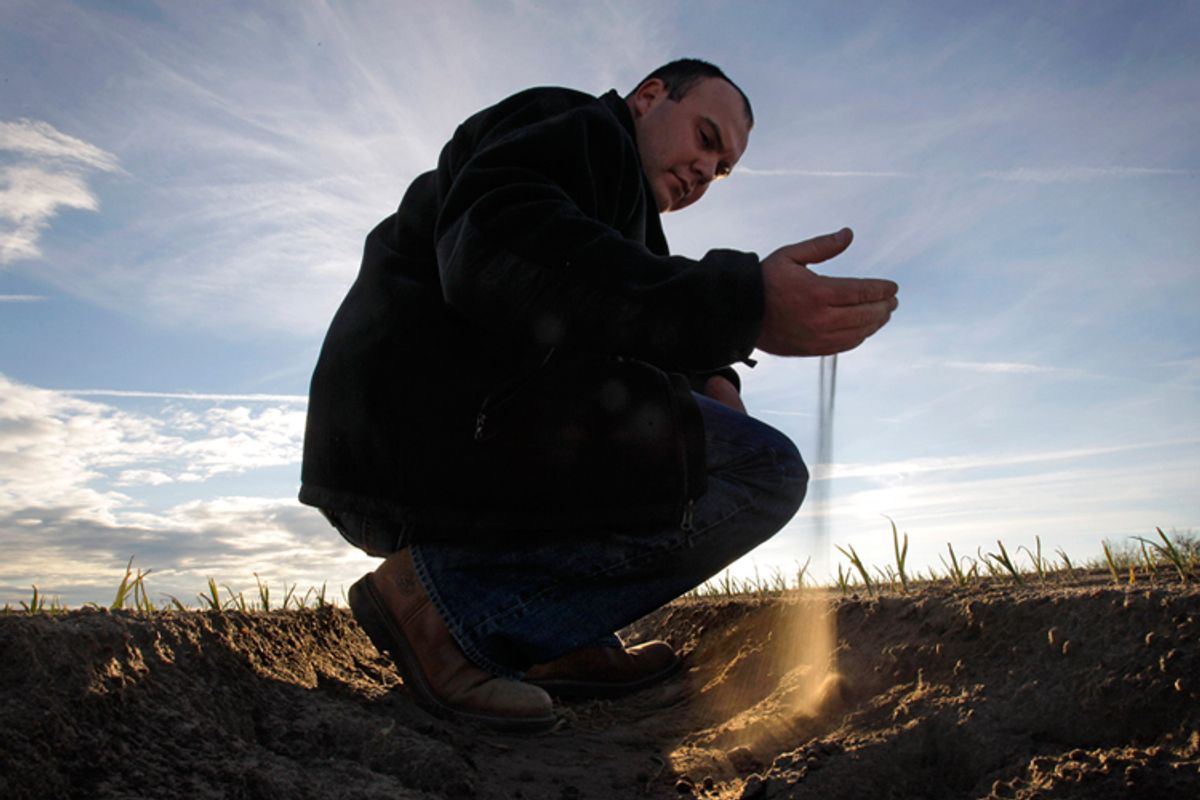 Fourteen states in the southern U.S. are suffering through the nation's worst drought in 60 years: a dry spell that, when all is said and done, might measure against the most severe in the country's history. The New York Times made that news one of its top stories in Tuesday morning's print edition, painting a vivid picture of parched and fallow farmlands from Florida to Arizona, and an agricultural industry buckling against drastically reduced output and a stagnant economy. But one element of the story notably absent from the Gray Lady's analysis is the specter of man-made climate change.

The Times story warns that the current drought could rival those seen during the Dust Bowl days. It also mentions that the dry spell is the result of a familiar meteorological phenomenon called La Niña -- which, it notes, "is an abnormal cooling of Pacific waters [that] usually follows El Niño, which is an abnormal warming of those same waters."

But to what extent are these multiplying abnormalities attributable to anthropogenic climate change? We don't know, because the Times skirts the issue. The Washington Post's weather blog notes that "La Niña wasn't the only force behind the drought," but cautions that "the co-conspirators remain unknown." That article then goes on to quote NOAA climate scientist Marty Hoerling, who said that the current dry spell does not appear to be a "climate change drought" (though he also warned that warming global temperatures have already exacerbated, and would continue to exacerbate, extreme weather in the future).

Given the seriousness of the Southwest dry spell, paired with myriad other examples of unusually severe weather -- the devastating tornadoes and flooding that gripped much of the South and Midwest this spring being the clearest and most recent examples -- it's hard to believe that climate change isn't somehow involved. So why haven't we been hearing more about it in relation to the current drought (which would seem like an obvious example of warming-induced trauma)? Turns out it's tough to peg any one atmospheric event to the phenomenon, even if the consensus is crystal clear about the threat of man-made climate change in a global and historical context.

"No climate scientist will tell you that a dry year is a result of climate change," said Barry Nelson, a senior policy analyst for the National Resource Defense Council's water program. "What they will say is that the decade-long drought in the Southwest that we've seen is consistent with the patterns we're likely to see in the future. The basic weather patterns are what climate change predicts."

Nelson said that we should absolutely expect areas of the southern United States, from Texas westward, to experience drier climates, as we have seen this summer. This impression -- consistent with both observations and scientific models of climate change -- posits that a warming Pacific Ocean will cause jetstreams that carry moist ocean air to travel farther north than they historically have, thus depriving large, arid portions of the country of vital water resources. (The jury is still out on long-term climate projections for other areas currently affected by the drought, such as Florida and Georgia, according to Nelson.) Still, the Niña that instigated the current dry spell may or may not have been caused by global warming. No one can say with any significant degree of certainty.

"The global climate is a very complex system, and it comes with variability. It would be convenient if Mother Nature stamped this cloud as 'Brought to you by climate change,' but that's not how the climate works," Nelson said.

And that might be the biggest challenge in communicating the science behind global warming to the general public. While researchers have come to a number of resounding and widely agreed-upon conclusions about the phenomenon, all it takes is a blizzard or a cold winter for skeptics to thumb their noses at the scientific establishment. Experts, meanwhile, cannot similarly point to individual natural disasters that were, in all likelhood, exacerbated by a warming climate and deliver ironclad conclusions.

But, again, it's the patterns that matter.

"We can see trends, and this is something that's very important for people to understand," Nelson said. "There's plenty of agreement about what kind of change we should anticipate seeing, and more droughts and more severe weather are some of the areas of concern."