The House GOP: No retreat, no surrender

Mitch McConnell's debt ceiling plan gives Washington a way out of its mess. But the Tea Party will never go for it 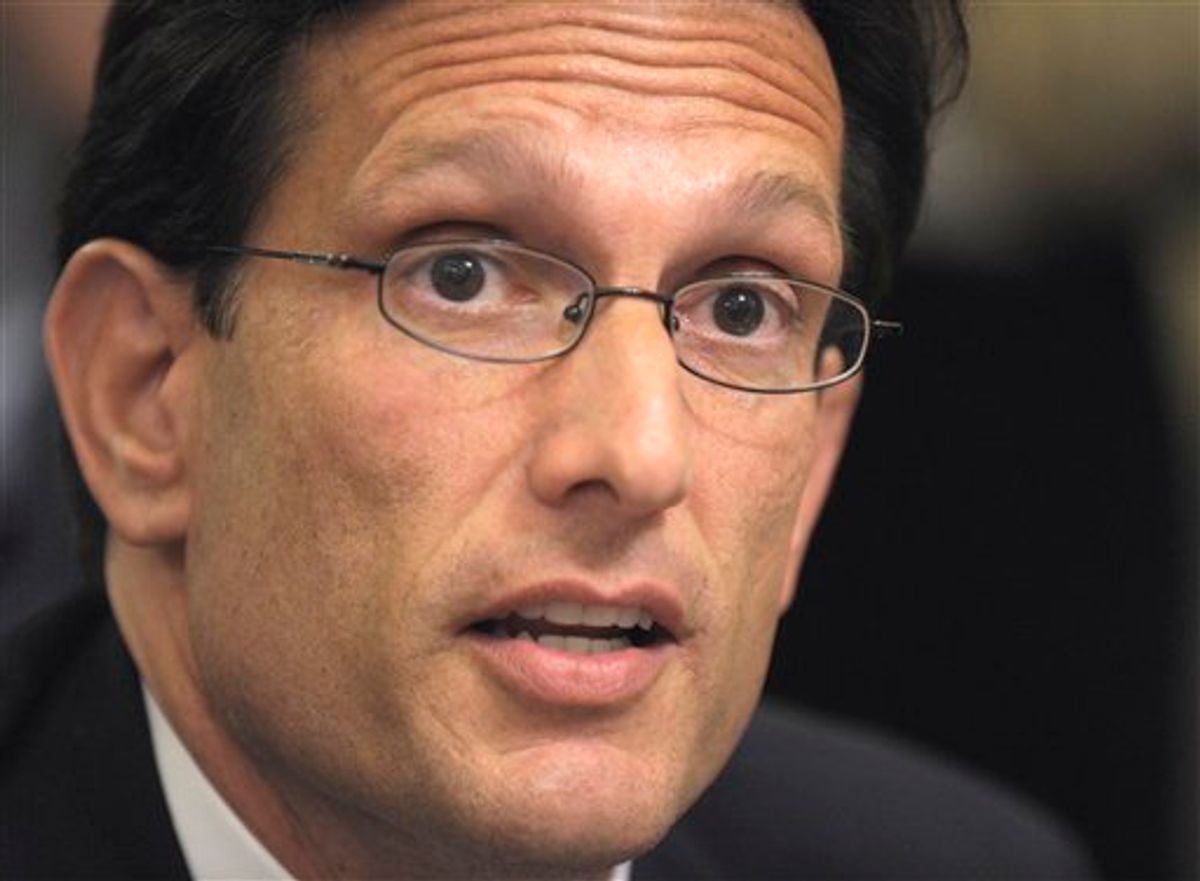 Call it what you will: punt, cave, Machiavellian genius; there's no question that Mitch McConnell's proposal to abandon the GOP's attempt to extract major spending cuts in return for a vote to raise the debt ceiling has drastically upset Washington's political calculus. There has been an an explosion of chatter about how McConnell's move is a tacit acknowledgement of a debt ceiling stalemate: Republicans won't agree to any deal that increases revenues; Democrats won't agree to any significant cuts in entitlements that don't include at least some new taxes.

Suddenly, there's a new conventional wisdom: Since the economic consequences of not raising the debt ceiling are supposedly unthinkable, something like the McConnell plan must eventually carry the day.

[T]he most contentious strikes (in the days when the U.S. had strikes) came when company executives and union leaders reached agreement, only to discover that union leaders couldn't deliver the membership. That's the House today. The Republican rank-and-file is distrustful of the leadership, and the leaders don't completely trust each other. Hence the president and Republican leaders are having trouble cutting a deal.

I don't normally believe much of what House Majority Leader Eric Cantor has to say, but his comments captured in a Politico story today seem to be an accurate description of the current reality:

"Nothing can get through the House right now," the Virginia Republican said. "Nothing."

Consider how we have arrived at this point. Cantor walked out of negotiations with the White House team led by Vice President Joe Biden, because, he said, the House would not accept any deal that resulted in revenue increases -- even if those increases were the result of ending tax breaks and closing loopholes. Then the "grand bargain" fell apart because House Republicans revolted en masse against the notion of sanctioning even $4 trillion in spending cuts if it required $1 trillion in tax hikes. Now we are supposed to believe that the same people who have rejected two big deals that would have resulted in real spending cuts are going to go along with a plan that might not result in any spending cuts at all. It's very difficult to see how that happens.

I've believed for a long time that pressure from Wall Street would ensure that the debt ceiling would be raised before the deadline -- and evidence is amassing that exactly such pressure explains why McConnell broached his "contingency" solution on Tuesday. But it now seems to me that the chances of a real disaster are even higher than they were before the McConnell stunner. As Robert Draper's Sunday New York Times Magazine story profiling the House Republican freshman class suggests, many members of the newest crop of representatives do not seem to understand, or care, about the potential fallout from their actions.

As Tim Griffin, a freshman from Arkansas, put it to me, "A lot of us feel that we're here on a mission, and the mission is now, and we're not that concerned about the political consequences." That mission -- to throttle the role of the federal government in general and Obama's progressive initiatives specifically -- may seem more like a kamikaze pursuit to some of the freshmen as the 2012 elections get closer and their constituents become increasingly impatient for government solutions. For now, however, they and their Tea Party backers constitute the most formidable power bloc on Capitol Hill.

Or, as Jon Chait puts it less politely: "The more we find out about the House Republican caucus, the more obvious it becomes that they're not just trying to maximize their leverage by pretending to be crazy. They're crazy."

Just look at Michele Bachmann, the chair of the House's Tea Party caucus. David Weigel reports her version of reality, delivered Wednesday morning, and it's a doozy:

It was Bachmann, at the end of the event, who captured the emerging GOP sentiment best: "President Obama is holding the full, faith and credit of the United States hostage so he can continue his spending spree!"

In Bachmann's world, Obama, the president who offered Republicans terms that disgust and horrify his own party, is holding the United States hostage. But Bachmann has long maintained that she would vote against raising the debt ceiling under almost any circumstances (unless attached to something completely unworkable as far as dealing with the nation's current economic situation, like a balanced-budget amendment.) Does Bachmann understand the meaning of the word "hostage"?

The next few weeks are going to be very interesting. Now that McConnell has presented the White House with a way out of the debt ceiling stalemate, Obama has firmer ground than ever before to stand on while demanding that the House agree to an actual compromise -- in effect, the chances for stalemate have improved. But for something like McConnell's plan to pass through the House, the Republican caucus will have to split, with a minority of Republicans who understand the real consequences of failing to raise the debt ceiling joining with Democrats. How does either John Boehner or Eric Cantor orchestrate that vote without the Republican caucus devolving into total acrimony?

No one knows the answer to that question.