Pressure is building on Gadhafi 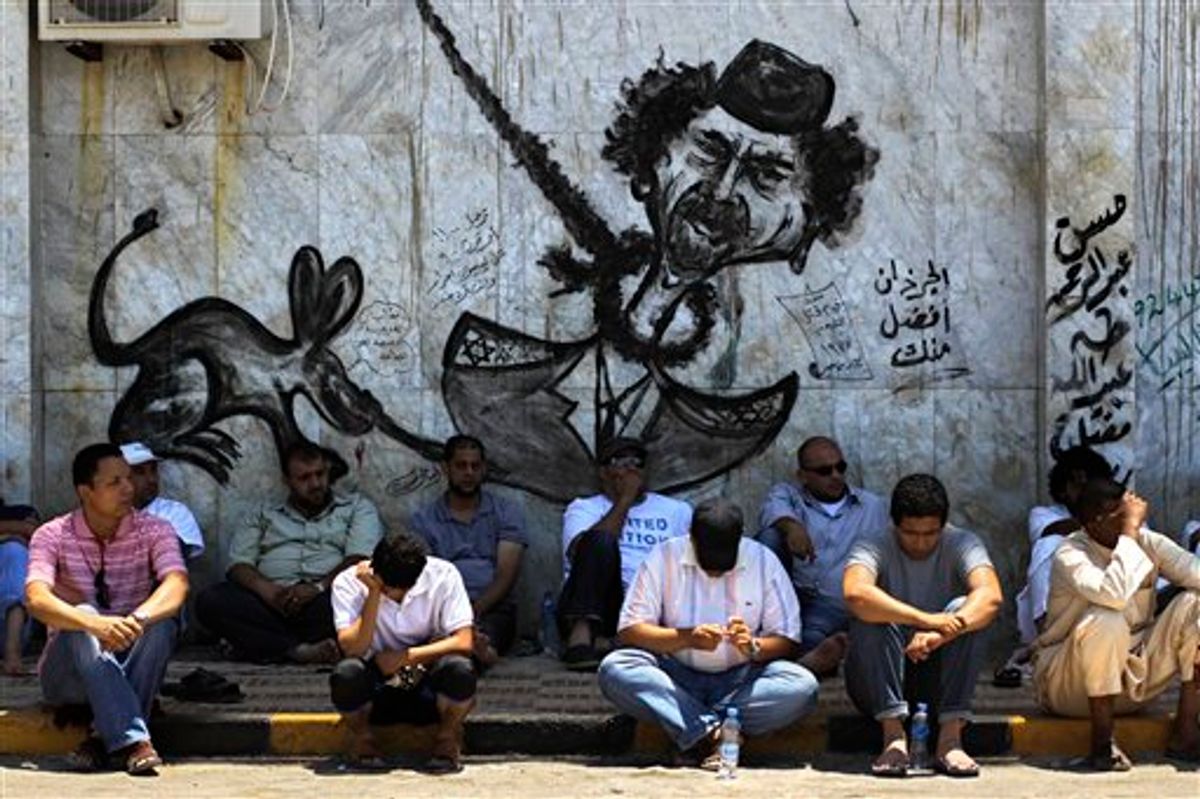 LIbyans sit in the shade under a graffiti depicting Libyan dictator Moammar Gadhafi before a Friday prayer in rebel-held Benghazi, Libya, Friday, July 8, 2011. NATO denied a Libyan government charge Thursday that the alliance is intentionally using its airstrikes to assist rebel advances, saying it is sticking to its mandate to protect civilians. (AP Photo/Sergey Ponomarev) (AP)
--

Pressure appears to be building against the regime of Moammar Gadhafi after months of apparent stalemate between the Libyan leader and rebel forces, according to new U.S. intelligence reports, U.S. officials tell The Associated Press.

While the battle is far from won, the officials point to three key indicators: dwindling fuel supplies, a cash crisis and reports of low morale among regime troops.

The assessment comes as French authorities describe overtures from Libyan emissaries reportedly seeking sanctuary for the Libyan leader, who has survived sustained bombing by NATO war planes and U.S. armed drones since mid-March.

While the rebels face their own supply problems, they have captured towns from Nalut to Kikla in Libya's western Nafusa mountains and cut a key crude oil pipeline that feeds one of the regime's major refineries in the town of al-Zawiya, the U.S. officials told the AP. They cited U.S. intelligence estimates that fuel shortages could occur within as little as a month.

Gadhafi is also facing a cash crisis after Turkey cut off his access, on July 4, to hundreds of millions in Libyan funds held in a Turkish-Libyan bank, the U.S. officials said. They spoke on condition of anonymity to discuss matters of intelligence.

While the Libyan strongman could not access actual cash, he had been issuing letters of credit to pay his debtors, including fuel importers, the U.S. officials said.

France's foreign minister reported that Gadhafi was prepared to leave power, citing Libyan emissaries who have approached the French government. It was not immediately clear how credible the offer was. Gadhafi has refused to leave or give up power since U.S. and NATO forces launched a bombing campaign in support of rebels who rose up against the regime's bloody crackdown against anti-government protests.

Foreign Minister Alain Juppe said that while the contacts do not constitute formal negotiations, "we receive emissaries who are saying: 'Gadhafi is prepared to leave. Let's discuss it.'" He didn't identify the envoys.

The U.S. State Department said Washington, too, is getting visitors.

"We have a lot of folks claiming to be representatives of Gadhafi one way or the other reaching out to lots of other folks in the West," State Department spokeswoman Victoria Nuland said. "But the messages are contradictory," she said, adding that there has yet to be a clear-cut message "that Gadhafi is prepared to understand that it's time for him to go."

French officials and their allies have insisted that Gadhafi's giving up power is key to ending the hostilities.

U.S. officials briefed on intelligence reports could not confirm that Gadhafi was considering departing, but they cited rising pressure against the regime.

The U.S. officials said morale among Gadhafi's soldiers was poor, according to troops who were captured or defected. Commanders aren't pleased with the quality of forces they have and are not making major gains on the battlefield, the officials said.

The rebels, meanwhile, are so busy trying to hold territory and survive that they have done little work governing the territory they hold, the officials said.

In Tripoli, Libyan officials warned that the rebel-controlled eastern half of the country could be cut off from water supplies without a truce to allow for maintenance work on a power plant pumping water up from the desert.

About 70 percent of the country relies on water drawn from underground aquifers deep in the southern desert, and the plant powering it in the east is falling apart, said the Libyan agricultural minister.

However, in the rebel-held city of Benghazi, the manager of the Great Man-made River project, Abdel Razek al-Zlitni, said there are no water supply problems in eastern Libya.

"The No. 1 zone, which supplies the eastern side of Libya with water, is fine and is working perfectly," he said of the reservoir there.

Al-Zlitni said, however, that there is no communication with the besieged area in western Libya so it is unclear if it is having water problems.

Elaine Ganley and Jenny Barchfield in Paris, Paul Schemm in Tripoli, Slobodan Lekic in Brussels, Matthew Lee in Washington, and Rami al-Shaheibi in Benghazi, Libya, contributed to this report.