Why Democrats should agree to a balanced-budget amendment

When Americans understand just how much government low taxes will buy, politics will change 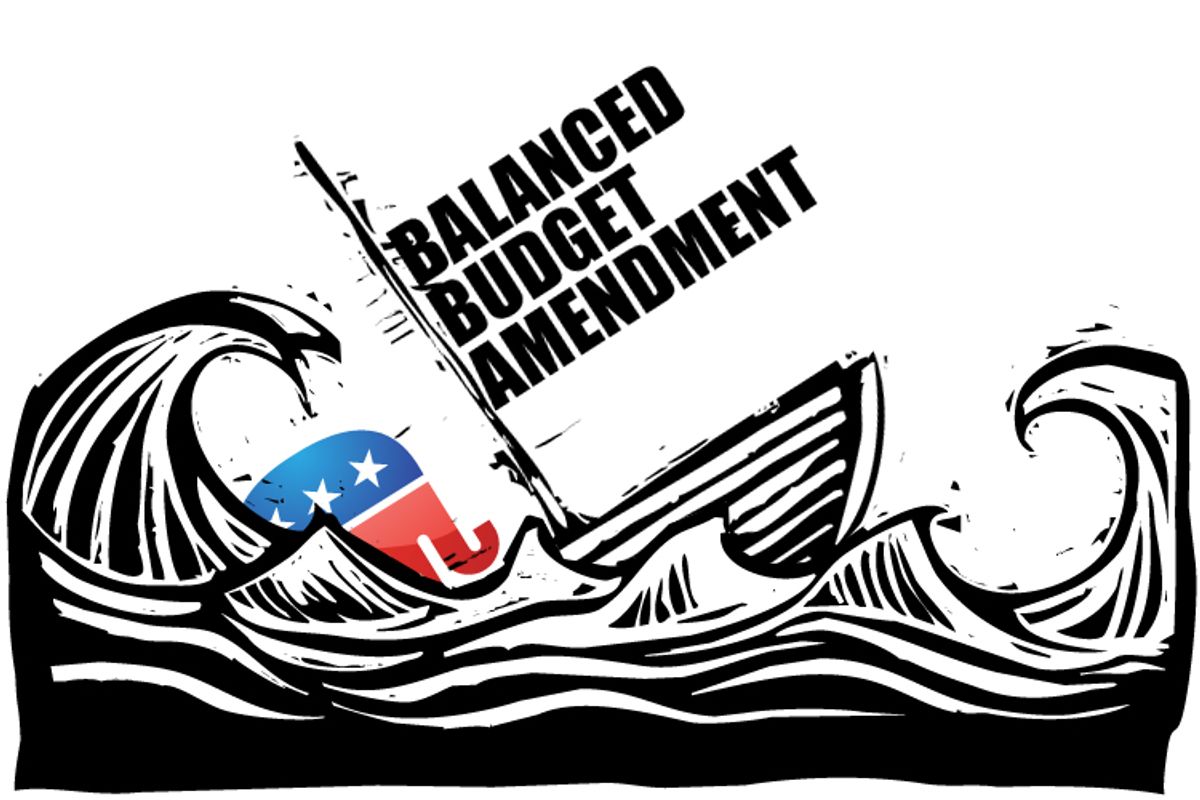 Here's how House Republicans negotiate: They make an extreme demand. Democrats reject it, offering a compromise. The next step: House Republicans respond by rejecting the compromise and coming back to the table with an even more outlandish, ridiculous request.

Tuesday morning's House GOP caucus offered a great example of this strategy. According to the Hill, some conservative Republicans are arguing that it's time to demand a balanced-budget amendment in return for raising the debt ceiling.

Conservatives in the House Republican conference are urging their leadership to press anew for a balanced-budget amendment as part of a debt deal, despite staunch opposition from Democratic leaders and the White House...

During the meeting, several members spoke up and pressed for the inclusion of the balanced-budget amendment, leading Speaker John Boehner (R-Ohio) to mention the proposal in his public remarks for the second day in a row.

"We have to have real controls in place to make sure this never happens again, real controls like a balanced-budget amendment," Boehner told reporters.

Hey, why not? I think this is a clear case where Democrats should say yes -- we'd love a balanced budget amendment! Let's do it! Because as I see it, there are only two logical ways it could play out. Either the Republicans agree to the tax increases necessary to balance the budget without savagely cutting government spending by around 40 percent, or we become poised to witness the imminent end of the American social welfare state as we know it.

And both of those outcomes would be good for Democrats.

First, I would like to note that I fully support, in principle, the notion that over the long run, a government's revenue and expenses should match up. I also happen to think there should be room for counter-cyclical budgeting -- building up surpluses and paying down debt when the economy is running hot, while maintaining the flexibility to run deficits that allow for fiscal stimuli during recessions. But overall, if this country wants a strong social welfare safety net -- if we want Medicare and Medicaid and Social Security and universal healthcare coverage, then we have to suck it up and pay for it.

And I think, in general we do want our safety net. Certainly, polling indicates that Americans cherish Medicare and Social Security. The problem is that you can't have a social welfare state and historically low taxes at the same time. It's one or the other.

We know what Republicans want. The Republican version of a balanced-budget amendment is designed to make it virtually impossible to raise taxes to address a budgetary imbalance. Bruce Bartlett has exhaustively documented why Republican proposals don't add up on purely technical grounds, but such trifles are irrelevant to my rhetorical purposes. Here's the key takeaway: The GOP goal isn't deficit reduction -- it's smaller government. A balanced-budget amendment is just another machete with which to hack away at the welfare state.

So let's give it to them -- and then we can find out if what Republicans want is what voters really want. My guess is no. My guess is that the consequences of a balanced-budget amendment that by definition all but forbids revenue increases will immediately result in a government that American voters don't want. We don't want to shove poor old people out of nursing homes onto the street. We don't want to be left to the heartless devices of a private healthcare insurance market when we're facing the debilitations of our senior years. We don't want to be completely on our own when we retire.

And maybe, just maybe, when forced to face the reality of what a country that wants low taxes can afford, voters will make some new choices as to who should run the government.

We might just have gotten a good example of how this could all play out. On Monday, I suggested that if Obama really wanted to play debt ceiling negotiation hardball he should announce that if the Republicans didn't vote to raise the debt limit, the U.S. government would stop cutting Social Security checks. On Tuesday, Obama told CBS News that "I cannot guarantee that those checks go out on August 3rd if we haven't resolved this issue."

A few hours after that news leaked, Senator Mitch McConnell decided that, oh what the heck, Republicans should let Obama raise the debt ceiling after all!