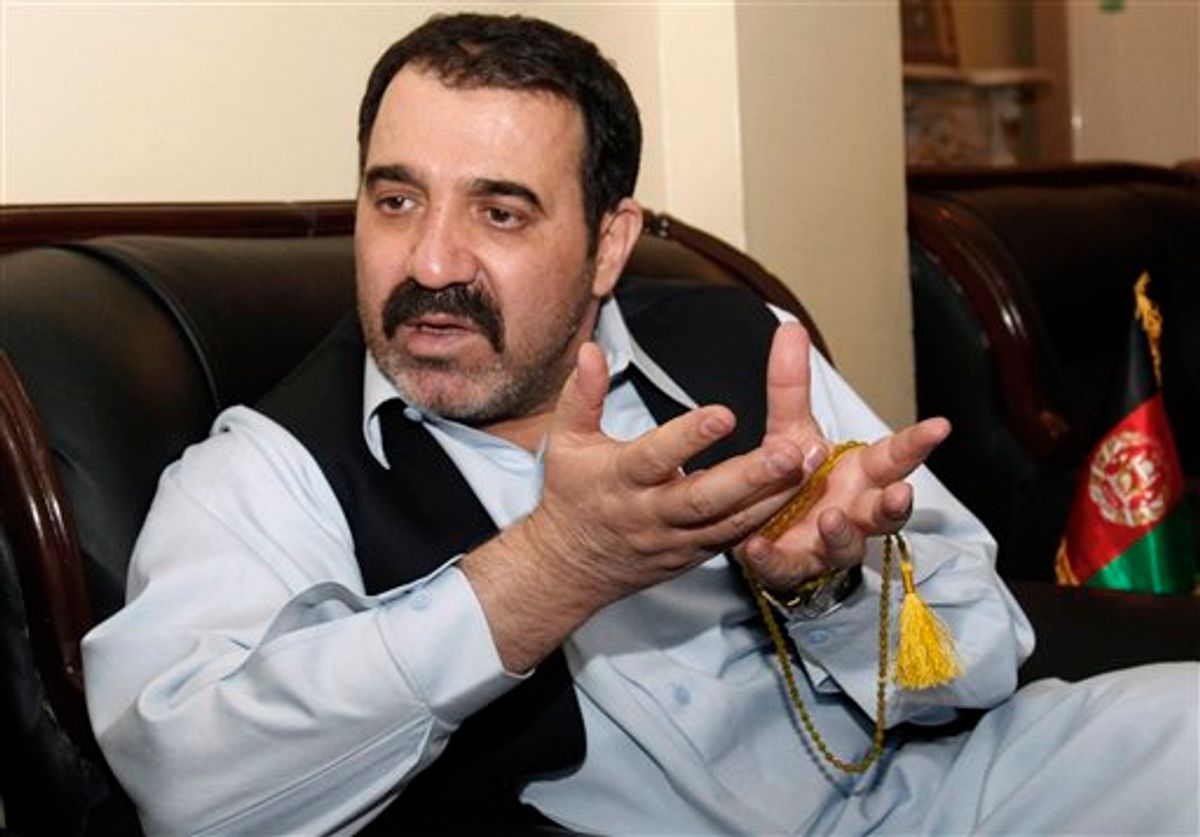 FILE - In this Wednesday, April 14, 2010 file photo Ahmad Wali Karzai, half-brother of Afghanistan's President Hamid Karzai gestures during an interview with The Associated Press in Kandahar, Afghanistan. An Afghan official says Afghan President Hamid Karzai's half brother has been killed in southern Afghanistan. Zalmai Ayubi, the spokesman for Kandahar province, says that Ahmad Wali Karzai was shot dead on Tuesday July 12, 2011. Ahmad Wali Karzai, who was head of the Kandahar provincial council, had become a political liability for the Karzai government _ a symbol of cronyism and a lightning rod for criticism of all that is wrong with the Karzai administration. (AP Photo/Rahmat Gul, File) (Associated Press)
--

A suicide bomber concealing explosives in his turban blew himself up inside a mosque in southern Afghanistan on Thursday during a memorial service for the president's assassinated half brother, officials said. At least four people were killed.

Among the victims of the attack in Kandahar city was Hekmatullah Hekmat, head of the clerical council for the province, and a young child, the Interior Ministry said. At least 15 people were wounded, including a parliamentarian, Bismillah Afghanmal.

The Kandahar provincial government said all other high-ranking officials at the ceremony were safe and had been taken to a secure location.

No one immediately claimed responsibility for the attack, which added weight to assertions that the slaying of President Hamid Karzai's younger brother would further destabilize a violent region of Afghanistan.

The Sarra Jamai mosque in the southwest of the city had been filled with relatives and friends of Ahmed Wali Karzai, who was killed earlier this week. They were offering their condolences to the family of the provincial leader.

Officials believe the bomber got the explosives past security by hiding them in his turban.

The attacker approached Hekmat after mourners ended a prayer, the governor said.

"There was a prayer going on and after that prayer the man came close to the director of the religious council and exploded," Wesa said. "It looks like he was targeting the director."

Wali Karzai was shot at close range by a confidant on Tuesday, leaving President Karzai without a powerful ally in Kandahar province, a former Taliban stronghold and the site of recent military offensives by the U.S.-led military coalition.

The Taliban claimed responsibility for the killing, which has threatened to create a power vacuum in the south.

Wali Karzai was regarded as the most powerful man in southern Afghanistan. He was head of the provincial council, the influential Populzai tribe, and the Afghan president's confidant and emissary.

Beyond his more official roles, Wali Karzai was also known as a master operator who played Kandahar's hard-line tribal and political factions against one another to retain ultimate control over the restive province.

Even the international alliance begrudgingly accepted Wali Karzai's sweeping influence in southern Afghanistan, despite their strong suspicions that he was involved in opium trafficking, smuggling and other criminal enterprises.

The mosque bombing was the second attack in Kandahar city on Thursday. Earlier in the morning, a bomb exploded near a police vehicle in the city, killing one civilian, said provincial police Chief Abdul Raziq.

As the conflict intensifies in the south and southeast of Afghanistan, the United Nations said Thursday that civilian deaths jumped 15 percent in the first half of 2011. The U.N. blamed a rise in insurgent roadside bombings and suicide attacks for the increase.

The U.N. said 1,462 Afghan civilians lost their lives -- many in the crossfire of battle between Taliban insurgents and Afghan, U.S. and NATO forces. During the first half of last year, 1,271 Afghan civilians were killed.

But many of the most contentious incidents continue to be international military strikes in which residents routinely claim civilians are killed.

In the latest such dispute Thursday, government officials in eastern Afghanistan accused NATO troops of killing six civilians in an overnight raid, and more than 1,000 people poured into the streets of Khost province in anger.

The military alliance said the joint patrol with Afghan forces in Khost province killed six fighters from a militant group allied with the Taliban known as the Haqqani network and injured one civilian.

"I don't have any indication that we killed civilians," Capt. Justin Brockhoff told The Associated Press.

But the reports stirred up anger in Khost and hundreds of people marched on the capital, shouting, "Death to America! Death to the government!" Men in the crowd carried the bodies of the dead on their shoulders.

The raid took place in the village of Toora Worai in an area known as Matoon, about four miles (seven kilometers) from the provincial capital of Khost city.

"The coalition last night ran an operation in that village and unfortunately they were acting on an incorrect report that there was a meeting of Haqqani network commanders going on," said Mubarez Zadran, a spokesman for the provincial government. "The operation left six civilians dead."

Khost provincial council member, Gul Mohammad Zazi, said international troops stormed into the village around midnight and fired into the windows of houses. Zazi said the dead were not connected to the insurgency.

Brockhoff said that NATO and Afghan forces were going after a Haqqani leader who was responsible for attacks and weapons trafficking in the area.

"As the security force was clearing a compound in the area, multiple insurgents armed with AK-47 rifles and pistols, opened fire on the force," Brockhoff said. Among those killed in the firefight was a woman who was armed with a pistol and fired on the troops, he added.

He said the international troops administered first aid to the female civilian who was wounded and transported her to a medical facility.

Asif Khan, a resident of Toora Worai who lives next to some of those who were killed said all of the dead were civilians. A spokesman for local schools, Sayed Musa Majro, said the dead included a teacher and two students.

Meanwhile, NATO said one of its service members was killed Wednesday in an attack in eastern Afghanistan. The coalition did not provide further details or the nationality of the service member.