How business lobbies bought all the laboratories of democracy

ALEC's dream of a world where industry writes every state law 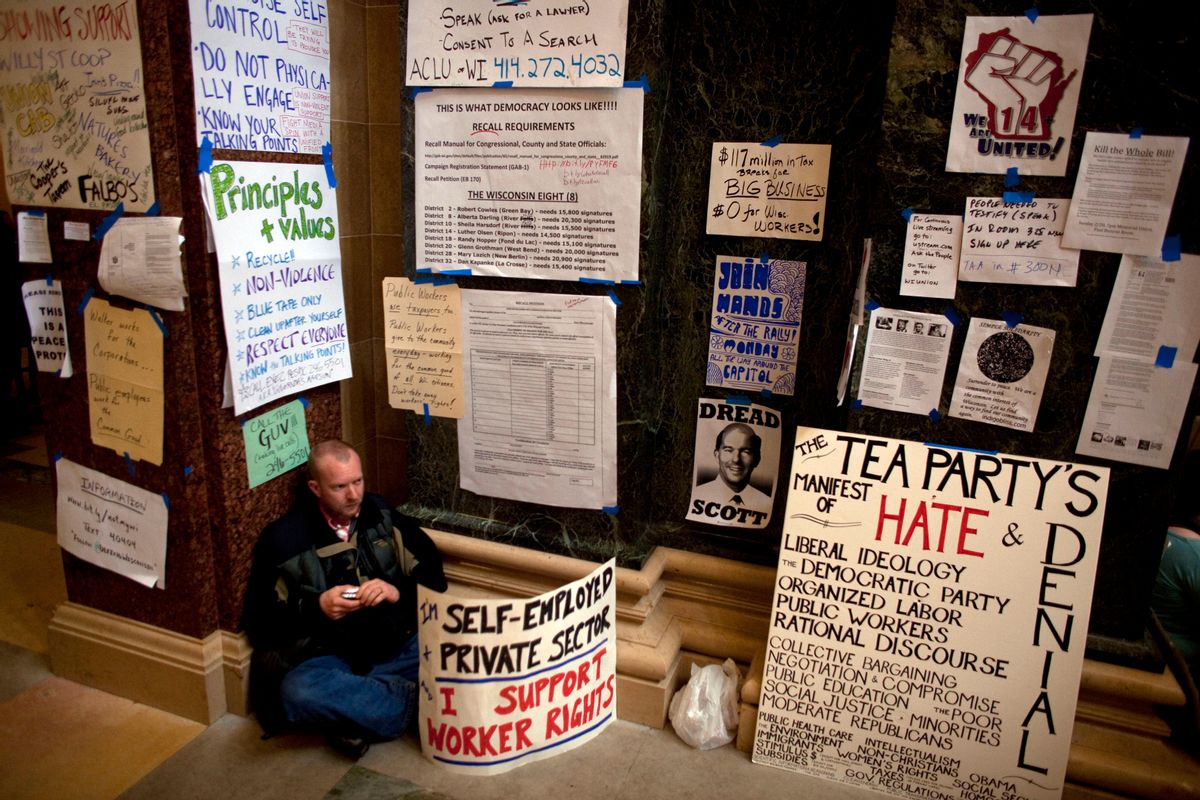 A man sits surrounded by protester signs on day eight of protests against the budget cuts proposed by Wisconsin Governor Scott Walker (Rep.) at the state Capitol in Madison, Wisconsin February 22, 2011. The Wisconsin state Assembly on Tuesday opened debate on a Republican proposal to curb the power of public sector unions that has sparked mass demonstrations and a tense stand-off with Democrats. REUTERS/Darren Hauck (UNITED STATES - Tags: POLITICS CIVIL UNREST) (Reuters)
--

It sure is funny that, at basically the same time, state legislatures across the country began passing a slew of similar measures attacking collective bargaining, undocumented immigration and abortion, right? Just a weird coincidence, I'm sure, this sudden nationwide war on public employee unions and immigrants and women.

Hah, I am just kidding. We all know it's because of lobbyists and the American Legislative Exchange Council. ALEC is sort of a Match.com for state lawmakers and the nation's worst industry lobbies. The Center for Media and Democracy's ALEC Exposed project has a handy list of the hundreds of bills ALEC pushes in every state in the union, on subjects ranging from school vouchers to gutting environmental regulations to opposition to the National Popular Vote Compact. (Yeah, that one I don't even get.)

Here's how the ALEC process works: GOP state legislators go to fancy conferences where they sit down with lobbyists and right-wing activists and draft right-wing legislation together. They return home and introduce it without mentioning the source. The lobbies then throw some cash at the legislators working to advance their agenda. Then, these days, the bill passes, and everyone else gets around to getting outraged about it, long after their outrage would do much good. Repeat.

This is how incredibly similar anti-immigration bills end up passing, independently, in Arizona and Tennessee. This is how bills against public employee collective bargaining end up passing in Wisconsin and Indiana. This is the process behind state resolutions banning the establishment of "Obamacare." Our biggest national wars are being fought, and largely won, in the statehouses, with liberal activists not even joining the fight until after they've lost it.

Liberals aren't this good at local politics. Unions and low-income organizations like ACORN used to take care of lobbying and politicking at the state and community level, but, oh, look what's happened to them. Defunded!

It took a while for Democrats to figure out that they should have their own Heritage Foundation, and so far, they seem to be taking just as long to decide to create their own ALEC. (Of course the Democratic ALEC will probably also push "school reform" and pro-telecom bills and whatever else rich Democratic donors want.)

As a result of that late adoption, the famous laboratories of democracy are now often the places where massive, monied interests -- along with their odd allies in the religious right -- can implement their political agendas piece by piece, instead of trying to get their dream bills through the U.S. Congress, where all the cameras and journalists are. The sudden death of the small- and midmarket newspaper certainly helps. Your average local TV news doesn't really do sophisticated policy analysis.

The closest thing liberals even have to a state to experiment with is ... California, with its property-tax cap and public rejections of gay marriage and marijuana legalization. (Right-wingers know better than to trust legislating to the popular ballot, even though they're quite good at organizing and spending huge sums of money to win ballot measures.)

Oh, the record number of bills restricting access to abortion services nationwide? That one might just be the natural Republican enthusiasm for controlling women's bodies. I mean, the right-to-life groups obviously jumped into action when the GOP came into power and lobbied for all of the 162 new restrictions on reproductive rights enacted since the start of the year, but I'm not sure any specific business lobby benefits from it.