Eric Cantor: The most dangerous whiner in America

Whenever economic disaster looms, you can count on the House majority leader to complain it is someone else's fault 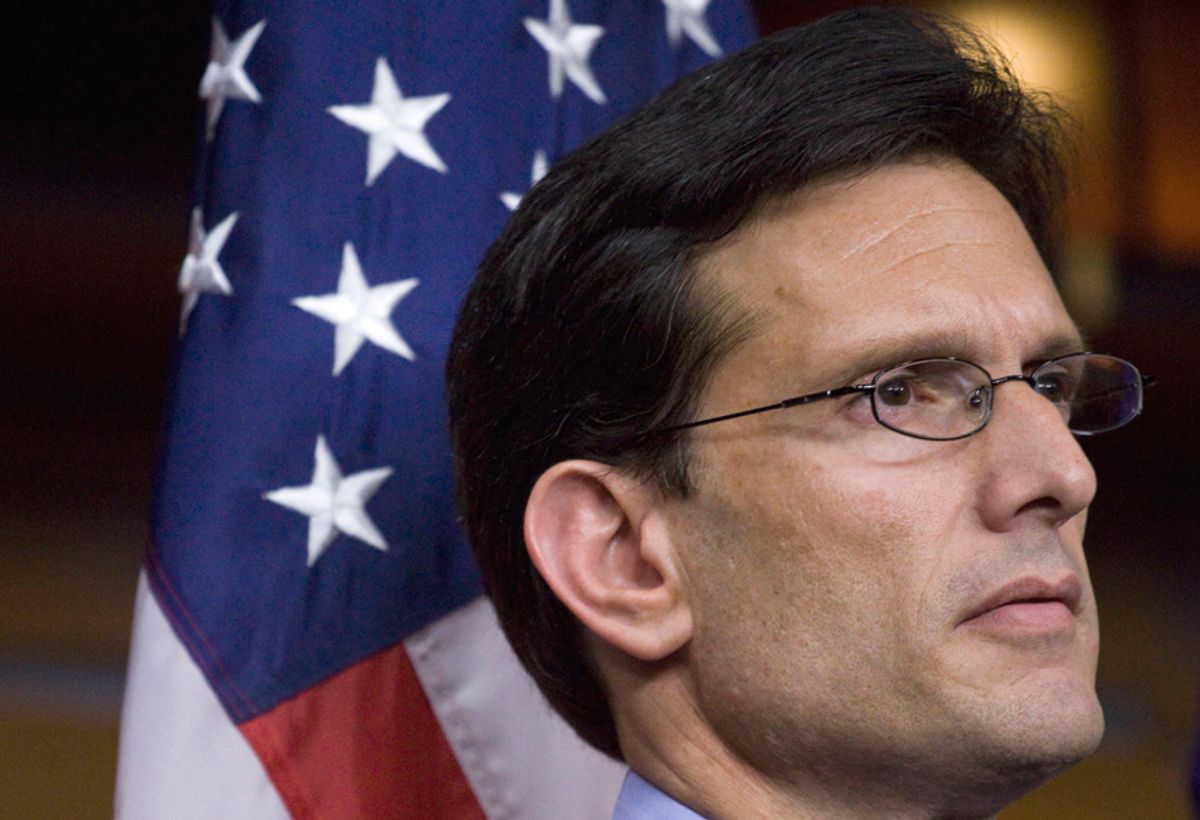 The first time I took serious notice of House Majority Leader Eric Cantor came in late September 2008, in the immediate aftermath of the failed vote to authorize the TARP Wall Street bailout. The nation was in a state of profound crisis. Economic activity was shuddering to a halt across the globe and Wall Street financial institutions were collapsing by the day. Say what you will about the merits of TARP, but the magnitude of the stock market crash that accompanied the failed vote only increased the general sense of distress. The United States was staring directly at the greatest economic disaster since the Great Depression and our political system appeared incapable of responding.

The failed vote was a huge surprise, and naturally attention focused on the role of  the House GOP leadership. Nancy Pelosi had managed to deliver most of her caucus, even though the prospect of bailing out Wall Street's biggest financial institutions made most Democrats sick to their stomachs. But 133 House Republicans had voted no. At the time, Eric Cantor was deputy minority whip -- his job was to wrangle votes. Although now he would like to pretend it never happened, he supported TARP and voted for it. So where did the train run off the tracks?

Turns out, it was all Nancy Pelosi's fault. She made a mean speech before the vote and hurt Republican feelings.

During the press conference that followed the Monday afternoon vote, Deputy Whip Eric Cantor (R-Va.) held up a copy of Pelosi's speech, saying, "Right here is the reason, I believe, why this vote failed, and this is Speaker Pelosi's speech that, frankly, struck the tone of partisanship that, frankly, was inappropriate in this discussion."

Whiny, playing the victim, refusing to take responsibility for his own party's behavior: Ladies and gentlemen, the great statesman Eric Cantor, during one of the darkest moments in the recent history of the United States.

And so here we are again, hurtling toward a self-inflicted wound that could be far more devastating than one bungled vote in the fall of 2008. And who do we have standing at the center of the mess, effectively blocking any progress toward a deal that would preserve the credit-worthiness of the United States? Eric Cantor, now the majority leader of the House of Representatives. As the representative of the no-compromise House GOP, Eric Cantor is now the most powerful, and dangerous, politician in America.

The New York Times' Michael Shear has a silly article up today in which he characterizes Democratic efforts to "demonize" Cantor as the new "boogeyman" as mere partisan maneuvering. No doubt, strategic partisanship is playing  a role. But the Democratic position is strengthened by the fact that it just so happens to be an accurate representation of reality.

After the failure of his own attempt to strike a "grand bargain" with Obama, Speaker of the House John Boehner has been rendered silent and powerless. Senate Minority Leader Mitch McConnell is scrambling to cobble together some kind of face-saving deal that would allow Republicans to keep attacking Obama without creating an economic meltdown. But Cantor? Cantor is going out of his way to torpedo any chance of a deal. He walked out of the Biden negotiations. He blew up the Boehner-Obama rapprochment. Perhaps worst of all, as Matthew Yglesias has documented, Cantor is actively misrepresenting the state of budget negotiations to his own party.

And to top it all off, Eric Cantor is still whiny! By his own account of Wednesday's budget negotiations at the White House, the meeting broke up when President Obama "got very agitated, seemingly."

Mr. Cantor quoted the president as saying: "Eric, don't call my bluff. I'm going to the American people with this."

Then, Mr. Cantor said, "He shoved back and said, 'I'll see you tomorrow' and walked out." "I was a little taken aback," Mr. Cantor added.

Oh no! Was the president mean to you, Eric? Did he hurt your feelings? Maybe you should blow up the economy to make yourself feel better.

The Democratic version of yesterday's meeting went a little differently; according to them, Cantor kept repeatedly pushing the same short-term budget deal, which would require repeating the entire debt ceiling debacle all over again next year, that Obama had already rejected. While it isn't wise to trust any party's account as the unvarnished truth, when you consider how Cantor is telling his own caucus things that are manifestly untrue, well, maybe one man's perceived "agitation" is actually some righteous presidential fury.

Kevin Drum thinks Cantor is digging his own political grave:

Here's a prediction: when all's said and done and the debt ceiling fight is finally over, Eric Cantor is going to be a lot further away from becoming Speaker of the House than he was six months ago. Every day he's looking more and more like a petulant child playing media games and less and less like a principled statesman working in the best interests of the country. He thinks he's being clever and savvy, but the rest of the country is seeing a grasping, opportunistic politician who thinks that posturing for Fox News is more important than facing up to serious problems. He's setting his career back a decade.

We can only hope so. If Cantor's career arc goes any higher after this performance, it's going to be a long century.