What Obama can do to save the planet

The president could single-handedly cut carbon emissions by rejecting Canada's new oil pipeline. Will he do it? 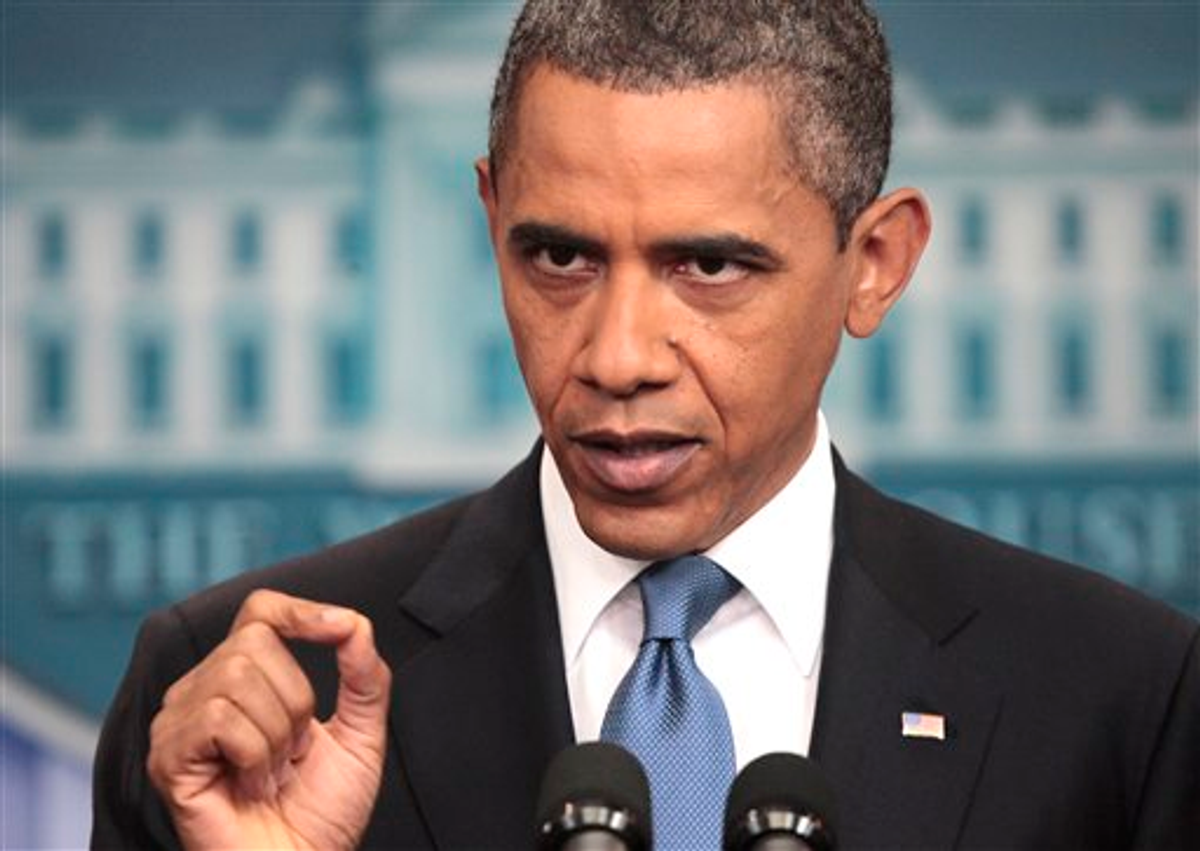 The climate problem has moved from the abstract to the very real in the last 18 months. Instead of charts and graphs about what will happen someday, we've got real-time video: first Russia burning, then Texas and Arizona on fire. First Pakistan suffered a deluge, then Queensland, Australia, went underwater, and this spring and summer, it's the Midwest that's flooding at historic levels.

The year 2010 saw the lowest volume of Arctic ice since scientists started to measure, more rainfall on land than any year in recorded history, and the lowest barometric pressure ever registered in the continental United States. Measured on a planetary scale, 2010 tied 2005 as the warmest year in history. Jeff Masters, probably the world's most widely read meteorologist, calculated that the year featured the most extreme weather since at least 1816, when a giant volcano blew its top.

Since we're the volcano now, and likely to keep blowing, here's his prognosis: "The ever-increasing amounts of heat-trapping gases humans are emitting into the air put tremendous pressure on the climate system to shift to a new, radically different, warmer state, and the extreme weather of 2010-2011 suggests that the transition is already well underway."

There's another shift, too, and that's in the response from climate-change activists. For the first two decades of the global-warming era, the suggested solutions to the problem had been as abstract as the science that went with it: complicated schemes like the Kyoto Protocol, or the cap-and-trade agreement that died in Congress in 2010. These were attempts to solve the problem of climate change via complicated backstage maneuvers and manipulations of prices or regulations. They failed in large part because the fossil-fuel industry managed, at every turn, to dilute or defang them.

Clearly the current Congress is in no mood for real regulation, so -- for the moment anyway -- the complicated planning is being replaced by a simpler rallying cry. When it comes to coal, oil, and natural gas, the new mantra of activists is simple, straightforward, and hard to defang: Keep it in the ground!

Two weeks ago, for instance, a few veteran environmentalists, myself included, issued a call for protest against Canada's plans to massively expand oil imports from the tar sands regions of Alberta. We set up a new website, tarsandsaction.org, and judging from the early response, it could result in the largest civil disobedience actions in the climate-change movement's history on this continent, as hundreds, possibly thousands, of concerned activists converge on the White House in August. They'll risk arrest to demand something simple and concrete from President Obama: that he refuse to grant a license for Keystone XL, a new pipeline from Alberta to the Gulf of Mexico that would vastly increase the flow of tar sands oil through the U.S., ensuring that the exploitation of Alberta's tar sands will only increase.

Forget the abstract and consider the down-and-dirty instead. You can undoubtedly guess some of the reasons for opposition to such a pipeline. It's wrecking native lands in Canada, and potential spills from that pipeline could pollute some of the most important ranchlands and aquifers in America. (Last week's Yellowstone River spill was seen by many as a sign of what to expect.)

There's an even bigger reason to oppose the pipeline, one that should be on the minds of even those of us who live thousands of miles away: Alberta's tar sands are the continent's biggest carbon bomb. Indeed, they're the second largest pool of carbon on planet Earth, following only Saudi Arabia's slowly dwindling oilfields.

If you could burn all the oil in those tar sands, you'd run the atmosphere's concentration of carbon dioxide from its current 390 parts per million (enough to cause the climate havoc we're currently seeing) to nearly 600 parts per million, which would mean if not hell, then at least a world with a similar temperature. It won't happen overnight, thank God, but according to the planet's most important climatologist, James Hansen, burning even a substantial portion of that oil would mean it was "essentially game over" for the climate of this planet.

Halting that pipeline wouldn't solve all tar sands problems. The Canadians will keep trying to get it out to market, but it would definitely ensure that more of that oil will stay in the ground longer and that, at least, would be a start. Even better, the politics of it are simple. For once, the Republican majority in the House of Representatives can't get in the way. The president alone decides if the pipeline is "in the national interest." There are, however, already worrisome signs within the Obama administration. Just this week, based on a State Department cable released by WikiLeaks, Neela Banerjee of the Los Angeles Times reported that, in 2009, the State Department's "energy envoy" was already instructing Alberta's fossil-fuel barons in how to improve their "oil sands messaging," including "increasing visibility and accessibility of more positive news stories." This is the government version of Murdochian-style enviro-hacking, and it leads many to think that the new pipeline is already a done deal.

Still, the president can say no. If he does, then no pipeline -- and in the words of Alberta's oil minister, his province will be "landlocked in bitumen" (the basic substance from which tar-sands oil is extracted). Even energy-hungry China, eager as it is for new sources of fossil fuels, may not be able to save him, since native tribes are doing a remarkable job of blocking another proposed pipeline to the Canadian Pacific. Oil, oil everywhere, and nary a drop to sell. (Unfortunately that's not quite true, but at least there won't be a big new straw in this milkshake.)

An Obama thumbs-down on the pipeline could change the economics of the tar sands in striking ways. "Unless we get increased [market] access, like with Keystone XL, we're going to be stuck," said Ralph Glass, an economist and vice-president at AJM Petroleum Consultants in Calgary.

Faced with that prospect, Canada's oilmen are growing desperate. Earlier this month, in a classic sleight of hand, they announced plans for a giant "carbon capture and sequestration" scheme at the tar sands. That's because when it comes to global warming, tar sands oil is even worse than, say, Saudi oil because it's a tarry muck, not a liquid, and so you have to burn a lot of natural gas to make it flow in the first place.

Now, the oil industry is proposing to capture some of the extra carbon from that cooking process and store it underground. This is an untested method, and the accounting scheme Alberta has adopted for it may actually increase the province's emissions. Even if it turns out to work perfectly and captures the carbon from that natural gas that would have escaped into the atmosphere, the oil they're proposing to ship south for use in our gas tanks would still be exactly as bad for the atmosphere as Saudi crude. In other words, in the long run it would still be "essentially game over" for the climate.

The Saudis, of course, built their oil empire long before we knew that there was anything wrong with burning oil. The Canadians -- with American help, if Obama obliges the oil lobby -- are building theirs in the teeth of the greatest threat the world has ever faced. We can't unbuild those Saudi Arabian fields, though happily their supplies are starting to slowly dwindle. What we can still do, though, is prevent North America from becoming the next Middle East.

So there will be a battle, and there will be nothing complicated or abstract about it. It will be based on one question: Does that carbon stay in the earth, or does it pour into the atmosphere? Given the trillions of dollars at stake it will be a hard fight, and there's no guarantee of victory. But at least there's no fog here, no maze of technicalities.

The last climate bill, the one the Senate punted on, was thousands of pages long. This time there's a single sheet of paper, which Obama signs... or not.

Bill McKibben is founder of the global climate campaign 350.org. His latest book is "Eaarth: Making a Life on a Tough New Planet.".