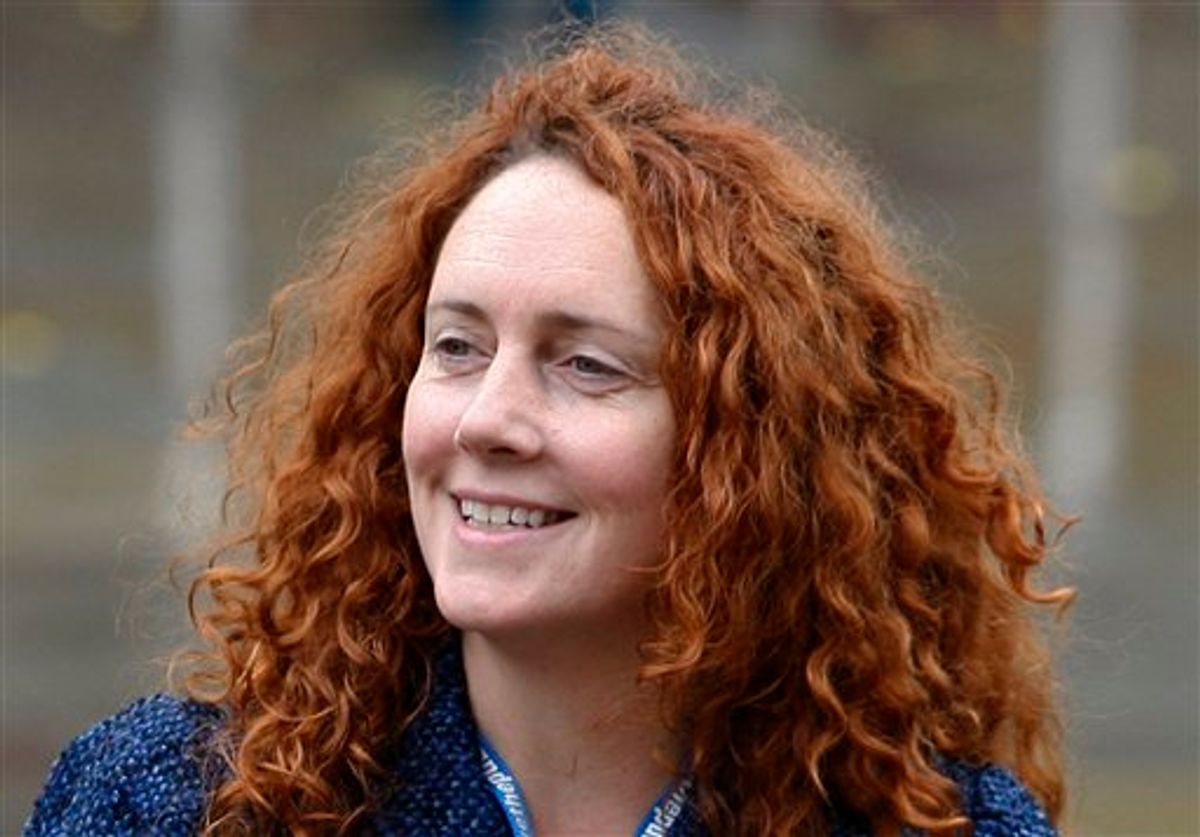 Rebekah Brooks, the loyal lieutenant of Rupert Murdoch, resigned Friday as chief executive of his embattled British newspapers, becoming the biggest casualty so far in the phone hacking scandal at a now-defunct Sunday tabloid.

Murdoch had defended Brooks in the face of demands from politicians that she step down, and had previously refused to accept her resignation. He made an abrupt switch, however, as his News Corp. company struggled to contain a U.K. crisis that is threatening his entire global media empire.

Brooks was editor of the News of the World tabloid between 2000 and 2003, including the time when the paper's employees allegedly hacked into the telephone of 13-year-old murder victim Milly Dowler when police were searching for her. That has raised allegations of interfering in a police investigation.

That allegation last week provoked outrage far beyond previous revelations of snooping on celebrities, politicians and top athletes, and knocked billions off the value of News Corp. In quick succession, Murdoch closed the 168-year-old News of the World and abandoned his multibillion-pound attempt to take full control of the lucrative British Sky Broadcasting, while Prime Minister David Cameron appointed a judge to conduct a sweeping inquiry into criminal activity at the paper and in the British media.

Brooks said the debate over her position as CEO of News International was now too much of a distraction for parent company News Corp. and she would concentrate on refuting allegations in the scandal.

"I have believed that the right and responsible action has been to lead us through the heat of the crisis. However my desire to remain on the bridge has made me a focal point of the debate," Brooks said in an email Friday to colleagues that was released by News International. "This is now detracting attention from all our honest endeavors to fix the problems of the past."

Tom Mockridge, chief executive of News Corp.'s Sky Italia television unit, was appointed to succeed Brooks immediately. Mockridge began his career at a paper in New Zealand and then served as a spokesman for the Australian government before joining News Corp. in 1991.

News Corp. also announced Friday it would run advertisements in all of Britain's national papers this week to "apologize to the nation for what has happened."

"We will follow this up in the future with communications about the actions we have taken to address the wrongdoing that occurred," said James Murdoch, who heads the international operations of the New York-based News Corp. and has been considered to be his father's heir apparent.

He said News Corp. had set up an independent Management & Standards Committee to establish and enforce clear standards of operation.

That was an abrupt shift in tone from Rupert Murdoch's comments Thursday to The Wall Street Journal -- one of his own papers -- saying that News Corp. management had handled the crisis "extremely well in every way possible" with just a few "minor mistakes."

Brooks has been in charge of News International's four British newspapers since 2007, following a four-year stint as editor of the market-leading daily tabloid, The Sun. Just a week ago, she faced 200 angry employees of News of the World who had lost their jobs when Murdoch shut down the paper amid the scandal.

The news of her resignation was greeted with relief.

"It is right that Rebekah Brooks has finally taken responsibility for the terrible events that happened on her watch, like the hacking of Milly Dowler's phone," said opposition Labour Party leader Ed Miliband, who had been demanding that she quit. "No one in this country should exercise power without responsibility."

"(It is) the right decision," said Steve Field, a spokesman for Cameron who had also called for Brooks to resign.

Brooks agreed Thursday to answer questions next week from a U.K. parliamentary committee. Rupert and James Murdoch initially resisted, but also agreed to appear after the committee raised the stakes by issuing formal summonses.

Appearing before another parliamentary committee in 2003, Brooks had been asked whether News of the World or The Sun had ever paid police for information.

"We have paid the police for information in the past," she said.

Asked if she would do it again, she said: "It depends."

Andy Coulson, then the editor of News of the World who was arrested last week in the hacking investigation, interrupted to say: "We operate within the (press) code and within the law and if there is a clear public interest then we will."

In an example of the cozy ties between the British press and politicians, Coulson was Cameron's communications chief before resigning in January.

Murdoch flew into London last weekend to take charge of the response to the mushrooming phone scandal. Asked by reporters what his priority was, Murdoch gestured to Brooks and said, "This one."

In her statement Friday, Brooks thanked the Murdochs for their support.

"Rupert's wisdom, kindness and incisive advice has guided me throughout my career and James is an inspirational leader who has shown me great loyalty and friendship," she said.

James Murdoch praised Brooks as "one of the outstanding editors of her generation and she can be proud of many accomplishments as an executive."

"We support her as she takes this step to clear her name," he said.

On Thursday, police arrested Neil Wallis, former deputy editor and then executive editor of News of the World, in the investigation of phone hacking.

In the United States, meanwhile, the Federal Bureau of Investigation opened an investigation into claims that News Corp. journalists may have sought to hack into the phones of Sept. 11 victims in its quest for sensational scoops.

The U.K. investigation of phone hacking appears still to be at an early stage. Police say they have recovered a list of 3,700 names -- regarded as potential victims -- but so far had been in touch with fewer than 200 people.

While largely still on the defensive, another one of Murdoch's British papers, The Sun tabloid, scored one point Friday against former Prime Minister Gordon Brown, who had accused the paper of obtaining confidential medical files on his younger son, who has cystic fibrosis.

The Sun had vigorously rebutted the claim, saying it got its information from another parent, so far unidentified, allegedly motivated by a hope of raising awareness of the disease.

On Friday, The Guardian newspaper apologized for accepting Brown's version of events.

"Articles in the Guardian of Tuesday 12 July incorrectly reported that the Sun newspaper had obtained information on the medical condition of Gordon Brown's son from his medical records," the newspaper said in its corrections column. "In fact, the information came from a different source and the Guardian apologizes for its error."