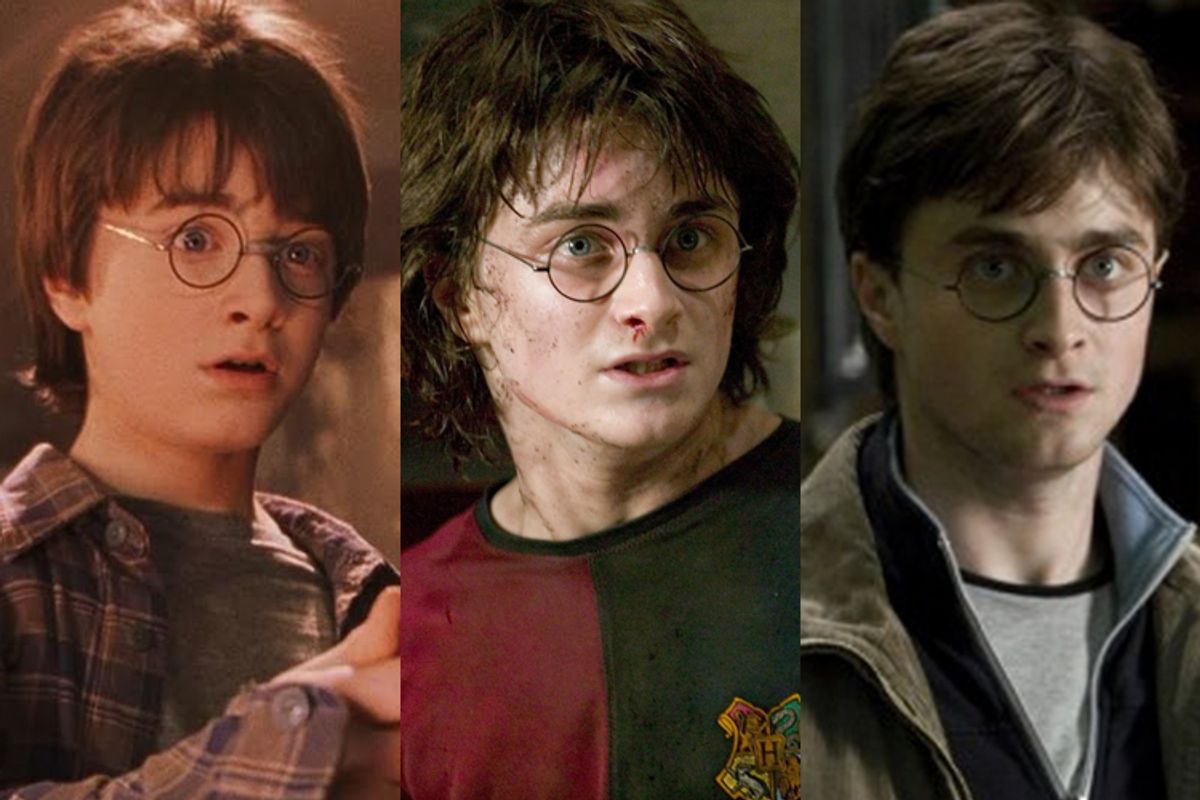 The Harry Potter film franchise's eight blockbuster installments have spanned an entire decade. As we are often reminded, that's a long time for any actor or actress -- particularly a young one -- to stick with a single series; it's also a lengthy stretch (albeit, of course, less gruelling) for a single movie reviewer.

Many critics have passed on one or more of the Potter films, but some have managed to be more steadfast. Here, we've ranked all eight movies based on the combined opinions of four reviewers who've seen the series through -- sometimes switching publications themselves in the process. We've also added Salon's take on each film, as delivered by either Andrew O'Hehir or Stephanie Zacharek. (We used MetaCritic to determine which reviewers had stayed with the series for all eight films, and for some of the quotes below. Rreviews that strayed significantly from the general consensus on a given film have been noted with an asterisk *).

Kenneth Turan (LA Times): "[T]he final hour of the two-hour-and-21-minute 'Azkaban' is the closest any of the films has gotten to capturing the enormously pleasing essence of the Potter books."

Peter Rainer (New York Magazine): "Finally, a Harry Potter movie that does justice to J. K. Rowling’s books -- and then some. ... [T]he most powerfully entrancing children's film in years."

David Edelstein (Slate): "In Cuarón's hands, the world of Harry Potter doesn't feel like a synthetic movie theme park anymore. It's almost real, Hogwarts and all."

Salon (Stephanie Zacharek): "J.K. Rowling's work has finally gotten the romantic filmmaker it deserves. ... As an adaptation, "Harry Potter and the Prisoner of Azkaban" is all you could wish for."

*Roger Ebert (Chicago Sun-Times): "Is 'Harry Potter and the Prisoner of Azkaban' as good as the first two films? Not quite. It doesn't have that sense of joyously leaping through a clockwork plot, and it needs to explain more than it should."

Roger Ebert (Chicago Sun-Times): "With this fourth film, the Harry Potter saga demonstrates more than ever the resiliency of J.K. Rowling's original invention."

Peter Rainer (Christian Science Monitor): "Although it doesn't often scale the visionary heights of Cuarón's film ["Harry Potter and the Prisoner of Azkaban"], at its best, "Harry Potter and the Goblet of Fire," which was directed by Mike Newell, is a worthy successor. Grade: A-"

David Edelstein (Slate): "I couldn't be more pleased with what the screenwriter, Steven Kloves, and the director, Mike Newell, have wrought this time."

Roger Ebert (Chicago Sun-Times): "I admired this Harry Potter. It opens and closes well, and has wondrous art design and cinematography as always, only more so."

David Edelstein (New York Magazine): "[H]ere comes movie No. 6, 'Harry Potter and the Half-Blood Prince.' Do we give a damn? I didn’t, until the film started—and it was splendid!"

Salon (Stephanie Zacharek): "[W]hile this is, of course, a fantasy movie, the quiet and potent idea nestled inside it is that there's magic in and around the things of everyday life."

Kenneth Turan (LA Times): "We don't turn to these films for thrilling or original cinema, we look for a level of craft, consistency and, most of all, fidelity to the originals -- all of which we get."

Kenneth Turan (LA Times): "'Harry Potter and the Deathly Hallows -- Part 2' turns out to be more than the last of its kind. Almost magically, it ends up being one of the best of the series as well."

Peter Rainer (Christian Science Monitor): "The collective emotion arising from the last installment of the "Harry Potter" franchise ... is a sense of loss. Even for those of us who have not found the films transcendent, there is some regret."

*Salon (Andrew O'Hehir): "[T]his final installment, driven far less by acting and characterization than any of the preceding seven, fails the Peter Jackson test of becoming an affecting and absorbing work on its own terms."

Roger Ebert (Chicago Sun-Times): "Harry Potter and the Order of the Phoenix" still has much of the enchantment of the earlier films, but Harry no longer has as much joy. "

Peter Rainer (Christian Science Monitor): "Director David Yates and screenwriter Michael Goldenberg ... have trimmed J. K. Rowlings's 870-page novel into a fairly well-paced 139 minutes -- the shortest film in the series, though not the best. Grade: B"

Salon (Stephanie Zacharek): "This is a gangly, confusing sprawl, and yet there are enough patches of beauty scattered throughout that it's impossible to reject it wholesale."

*David Edelstein (New York Magazine): "For all its portentousness, this is the best Harry Potter picture yet."

Peter Rainer (New York Magazine): "At a time when films have turned into fully loaded franchises, it's a miracle -- magical indeed -- when anything comes out that truly captivates. Harry Potter and the Sorcerer's Stone is no such miracle, unlike the book it is so scrupulously based on."

David Edelstein (Slate): "It is one thing ... to transport an audience and another to enchant it.You need more than big bucks to cast a spell. You need the magic that comes from emotion."

Kenneth Turan: "What saves 'Harry Potter and the Sorcerer's Stone' is what created it in the first place: J.K. Rowling's enrapturing imagination."

Salon (Andrew O'Hehir): "For everything [Director Chris] Columbus' film mishandles ... it remains a professional entertainment with just enough human moments to squeak by."

*Roger Ebert: "A lot of things could have gone wrong, and none of them have: Chris Columbus' movie is an enchanting classic that does full justice to a story that was a daunting challenge."

Roger Ebert (Chicago Sun-Times): "[A] handsome and sometimes harrowing film [that] will be completely unintelligible for anyone coming to the series for the first time."

Kenneth Turan (LA Times): "What's the latest Harry Potter film like? If you've seen the previous six, you already know. If you haven't there's no point in trying to catch up now."

Peter Rainer (Christian Science Monitor): "By necessity, Part 1 is essentially a lead-in to the grand finale, and so there are stretches where exposition swamps drama. I suspect there will be few such stretches in Part 2, when all the stops will be let out. All the more reason to savor the scaled-back moments in this one. Grade: B+"

*Salon (Andrew O'Hehir): "[L]ong, dour, impressive and handsome ... It would have been easy to turn this series into transatlantic kitsch -- but in fact the kitsch is respectfully made, and distinctively British."

David Edelstein (Slate): "A movie about the care and feeding of the child stars of 'Harry Potter' would be more entertaining than the thing itself. It would have some real life in it."

Kenneth Turan: "[T]he Harry Potter novels have a kind of magic that it is beyond the powers of these films to duplicate."

Peter Rainer (New York Magazine): "[R]epresents a lost opportunity to give children, not to mention adults, a movie experience that would widen their eyes as the justly beloved Rowling books did."

Salon (Stephanie Zacharek): "'Chamber of Secrets' was clearly made with the utmost care (and plenty of money), yet it simply withers before us like a choked-off mandrake plant. It's starved for the one moviemaking resource that doesn't cost a lot of money: imagination."

*Roger Ebert: "The first movie was the setup, and this one is the payoff."