The shape of Obama's debt ceiling deal to come

The president all but spells it out: He'll pay $1 trillion in ransom money to avert disaster 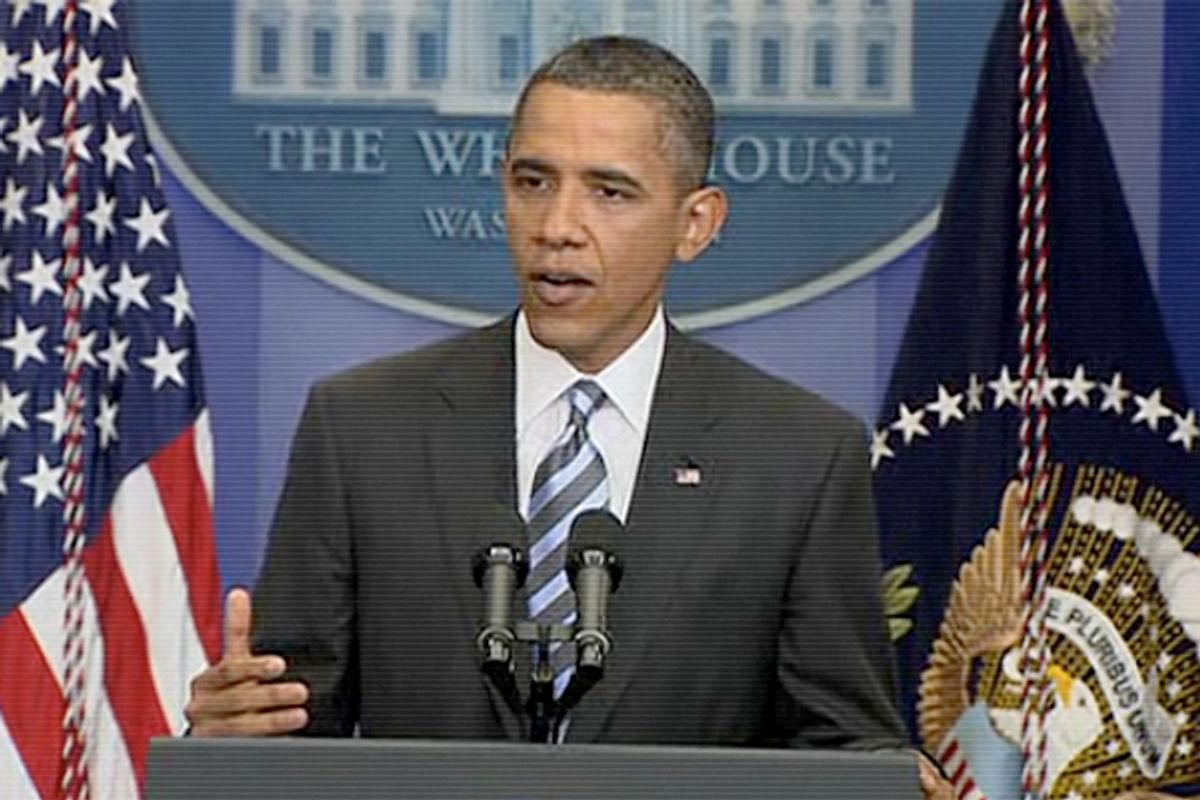 President Obama's best line in his Friday morning press conference came in response to a question asking his opinion of Sen. Mitch McConnell's controversial proposal to give him the authority to raise the debt ceiling, without any firm deal on deficit reduction.

It was good to know, said the president, that a backup plan exists, that "if Washington operates as usual and can't get anything done, let's at least avert Armageddon."

The assembled press corp greeted the line with grim laughter, but it wasn't really a joke. At this juncture, averting Armageddon is about the best we can hope for from this mess.

Obama made it clear that McConnell's band-aid is not his preferred solution. He repeated his primary goal: "something big" that would "solve the underlying problem of deficits and debt" and give the White House room to move forward on more substantive policy measures. He reiterated his desire for a grand bargain that would reflect a "balanced approach": in return for substantial cuts in discretionary spending, and entitlement reforms -- such as means-testing Medicare -- Obama wants to close a passel of corporate tax loopholes and end the Bush tax cuts for the wealthy.

But even as he stressed his desire, at this late date, for a big deal, he all but conceded that there was no matching commitment from House Republicans -- "who are dug in ideologically" -- for anything that remotely approaches "balance." He dismissed, in advance, a likely House vote endorsing a $2.4 trillion spending cut.

"If you are trying to get to $2.4 trillion without any revenue, then you are effectively gutting a whole bunch of spending programs that Americans depend on," said the president.

Then he made what was probably the most meaningful statement in his press conference.

"We've identified over a trillion dollars in defense and domestic spending cuts -- and that's hard to do. "

Obama was signaling, loud and clear, that he would be willing to agree to a trillion dollars worth of spending cuts over the next 10 years, in return for raising the debt ceiling by a sum large enough to cover all expected government borrowing through 2012 -- a figure calculated, not uncoincidentally, at $2.4 trillion.

Forget about the grand bargain. And put aside for now the McConnell backup plan. Some version of McConnell's scheme may end up becoming reality, but the real pushing and shoving on a debt ceiling deal  is taking place between two numbers: $2.4 trillion and $1 trillion.

House Majority Leader Eric Cantor has been complaining all week that Obama keeps lowering the amount of spending cuts the White House is willing to consider. As usual, Cantor has turned his disingenuous meter up to 11. From the beginning the White House has not agreed to any larger figure -- unless some revenue increases are included. Republican intransigence on the revenue front is the reason why the numbers getting discussed seem to be smaller and smaller. If the House GOP won't compromise, why should the White House?

It's beyond pathetic that we are at this point at all. A trillion dollars or so in cuts over 10 years won't make a meaningful difference in the long-run national deficit, and it isn't the proper medicine for the currently struggling economy. We're still looking at a hostage negotiation, and Obama is still saying he's willing to pay a ransom, when his initial position should have been: The White House does not negotiate with terrorists. His hand has always been stronger than he has been willing to play it -- and still is.

But if his baseline negotiating stance includes a $1 trillion in cuts without any revenue increases, then whatever deal that takes shape is obviously going to include at least that big a chunk.

As of Friday morning, here is what the emerging deal looks like. Conservative Republicans have balked at McConnell's plan to give Obama the de facto authority to raise the debt ceiling, but it it seems likely that in the end enough GOP House members  can be bought off with the trillion dollars or so in cuts that Obama is willing to dole out. Throw in a few mild stimulative sops to get Democrat buy-in -- a payroll tax cut, unemployment benefit extensions -- and you have a deal. The House Tea Party caucus may continue to hold firm. But as the deadline approaches and financial markets get closer to freaking out, enough GOP members will join with Democrats to push something along these lines through.

It's still a bad deal. A deal that never should have happened. But a deal, nonetheless, to raise the debt ceiling and stave off the stupidest self-inflicted economic catastrophe Washington has ever considered. Let's be thankful for small favors.