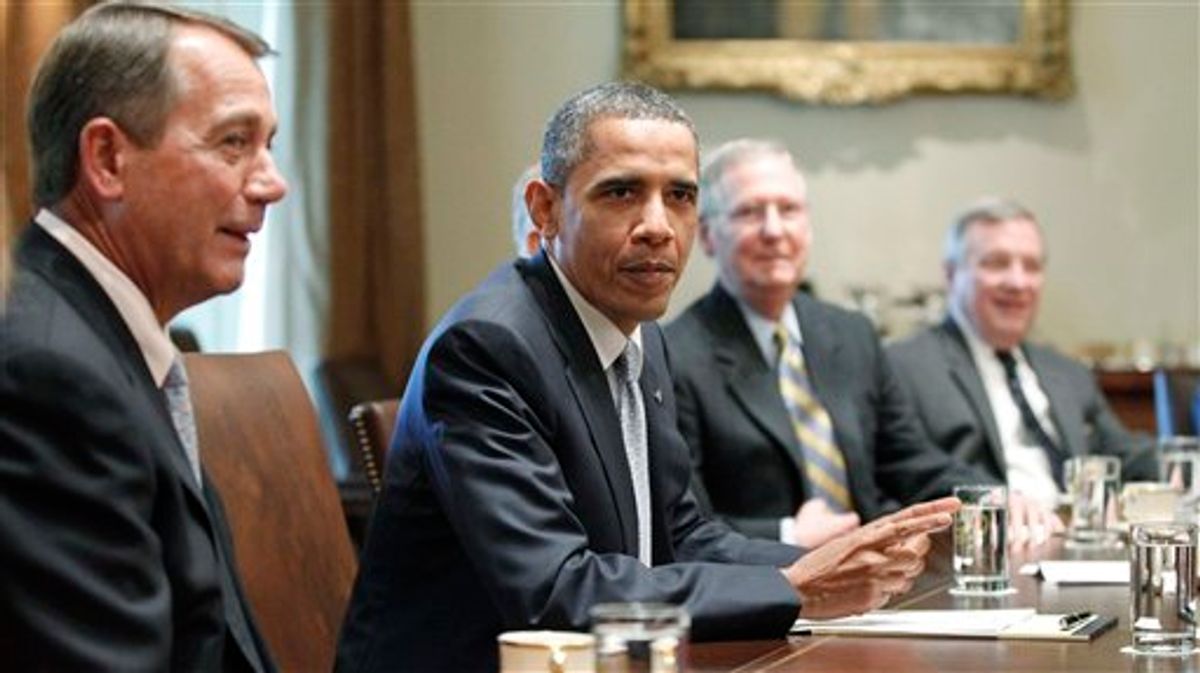 President Barack Obama sits with House Speaker John Boehner of Ohio, and Senate Minority Leader Mitch McConnell of Kentucky, and Sen. Dick Durbin, D-Ill., as he meets with Republican and Democratic leaders regarding the debt ceiling in the Cabinet Room of the White House in Washington, Wednesday, July 13, 2011. (AP Photo/Charles Dharapak) (AP)
--

Negotiations to increase the nation's debt ceiling shifted to Congress where Republican and Democratic leaders were assessing the mood of their members even as an intricate but potentially face-saving deal to avoid an unprecedented government default was taking shape in the Senate.

With an Aug. 2 deadline looming and no compromise jelling at the White House, President Barack Obama had to settle Friday for asking congressional leaders to take three deficit reduction options to their members to see which, if any, could win a vote in the House and Senate.

Meanwhile, a proposal the White House has termed a "fallback option" was taking root in the Senate as a likely alternative to the brinkmanship that has defined negotiations to secure an increase in the government's borrowing authority.

Obama, who had vowed to meet with congressional leaders every day until a debt limit deal was struck, did not schedule a session for Friday and instead asked leaders to gauge the temperament of their caucuses and to report back to him in 24 to 36 hours. White House officials said a meeting could still be scheduled this weekend.

Obama planned an 11 a.m. news conference Friday to discuss the status of debt limit talks, his second this week. House Republicans and House Democrats planned their own membership meetings earlier in the morning.

But attention was focusing on a separate track under discussion by Senate Republican leader Mitch McConnell and Senate Majority Leader Harry Reid. That plan would give Obama greater authority to raise the debt ceiling while setting procedures in motion that could lead to federal spending cuts.

The outline of the plan was winning unusual bipartisan support even as some conservatives voiced misgivings. But pressure for a solution was mounting with dire warnings from Federal Reserve Chairman Ben Bernanke, red flags from credit rating agencies and pressure from the business and financial sectors.

The White House publicly pushed for a "grand bargain" that would increase the debt ceiling while reducing the nation's long-term deficits by about $4 trillion, but officials conceded that the McConnell plan had merit as a means of avoiding a potentially disastrous default on the U.S. debt.

"It's not the preferred option that we have," White House spokesman Jay Carney said Thursday.

But the proposal is no one's preferred option, and that's what might make it the most palatable.

Under the plan, which would require approval by the House and Senate, Obama would have the power to order an increase in the debt limit of up to $2.5 trillion over the coming year unless both House and Senate vote by two-thirds margins to deny him. Reid and McConnell were trying to work out ways to guarantee that Congress would also get to vote on sizable deficit reductions. The plan also could be linked to immediate spending cuts already identified by White House and congressional negotiators.

Speaker John Boehner told reporters, "What may look like something less than optimal today, if we're unable to get an agreement might look pretty good a few weeks from now."

And House Democratic leader Nancy Pelosi, in rare praise for the Senate's top Republican, said: "I think everyone who is concerned about lifting the debt ceiling is saying bravo for Senator McConnell."

Participants and aides described Thursday's White House session as far more cordial than the tense conclusion to Wednesday's meeting, when a curt Obama declared "enough is enough" and dispensed with end-of-meeting niceties.

The smallest cuts could help sweeten the McConnell-Reid plan for House Republicans, who have been the most aggressive in demanding that the need to raise the debt limit be used as leverage to obtain sizable deficit reduction from Obama.

Adding to the urgency, Federal Reserve Chairman Ben Bernanke and JPMorgan Chase CEO Jaime Dimon issued separate warnings that a default could have a devastating effect on an already anemic U.S. economy.

Moreover, the credit rating agency Standard & Poor's warned that there is a 50 percent chance it will downgrade the government's credit rating within three months because of the impasse. It followed Moody's Investor Service, which announced Wednesday it is reviewing America's bond rating for a possible downgrade.