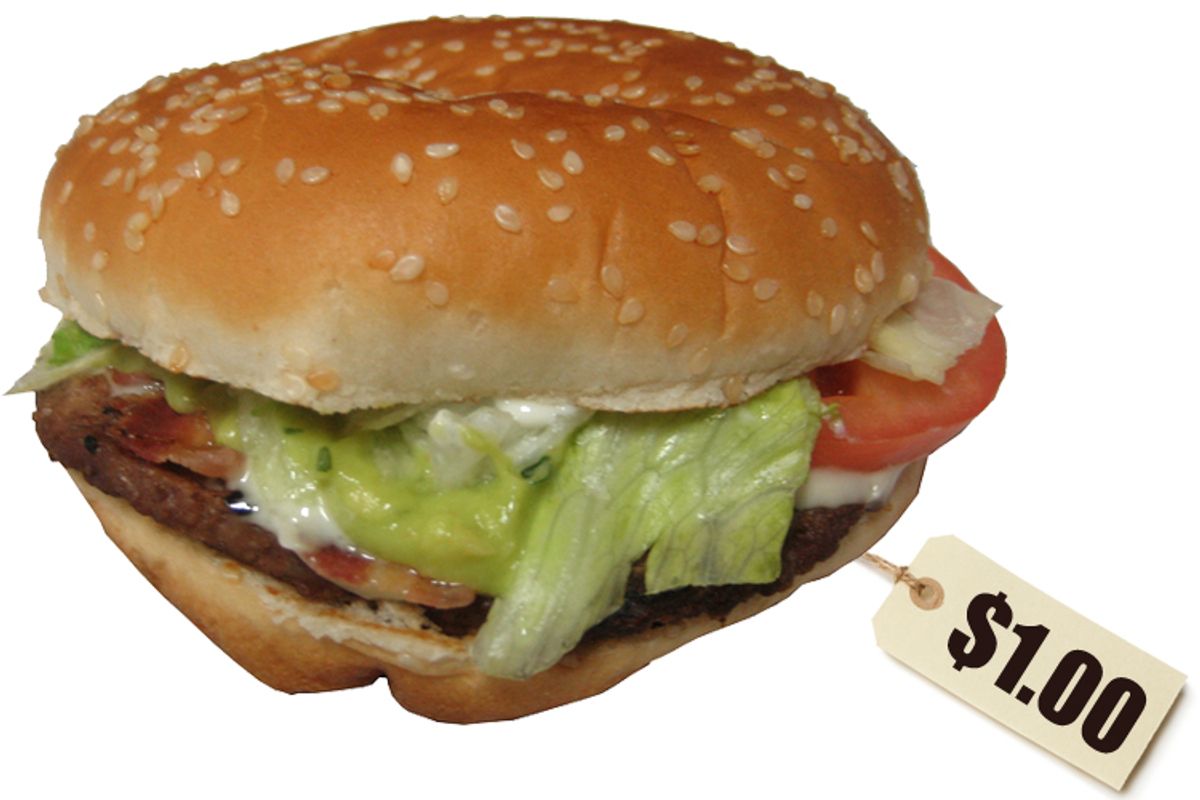 The easiest way to explain Gallup's discovery that millions of Americans are eating fewer fruits and vegetables than they ate last year is to simply crack a snarky joke about Whole Foods really being "Whole Paycheck." Rooted in the old limousine liberal iconography, the quip conjures the notion that only Birkenstock-wearing trust-funders can afford to eat right in tough times.

It seems a tidy explanation for a disturbing trend, implying that healthy food is inherently more expensive, and thus can only be for wealthy Endive Elitists when the economy falters. But if the talking point's carefully crafted mix of faux populism and oversimplification seems a bit facile -- if the glib explanation seems almost too perfectly sculpted for your local right-wing radio blowhard -- that's because it dishonestly omits the most important part of the story. The part about how healthy food could easily be more affordable for everyone right now, if not for those ultimate elitists: agribusiness CEOs, their lobbyists and the politicians they own.

As with most issues in this new Gilded Age, the tale of the American diet is a story of the worst form of corporatism -- the kind whereby the government uses public monies to protect private profit.

In this chapter of that larger tragicomedy, lawmakers whose campaigns are underwritten by agribusinesses have used billions of taxpayer dollars to subsidize those agribusinesses' specific commodities (corn, soybeans, wheat, etc.) that are the key ingredients of unhealthy food. Not surprisingly, the subsidies have manufactured a price inequality that helps junk food undersell nutritious-but-unsubsidized foodstuffs like fruits and vegetables. The end result is that recession-battered consumers are increasingly forced by economic circumstance to "choose" the lower-priced junk food that their taxes support.

Corn -- which is processed into the junk-food staple corn syrup and which feeds the livestock that produce meat -- exemplifies the scheme.

"Over the past decade, the federal government has poured more than $50 billion into the corn industry, keeping prices for the crop ... artificially low," reports Time magazine. "That's why McDonald's can sell you a Big Mac, fries and a Coke for around $5 -- a bargain."

Yes, it is a bargain, but one created by deliberate government policy that serves the corn industry titans, not by any genetic advantage that makes corn derivatives automatically more affordable for the budget-strapped commoner.

The aggregate effect of such market manipulation across the agriculture industry, notes Time, is "that a dollar [can] buy 1,200 calories of potato chips or 875 calories of soda but just 250 calories of vegetables or 170 calories of fresh fruit."

So while it may be amusing to use Americans' worsening recession-era diet as another excuse to promote cultural stereotypes, the nutrition crisis costing us billions in unnecessary healthcare costs is more about public policy and powerful special interests than it is about epicurean snobs and affluent tastes. Indeed, this is a problem not of individual proclivities or of agricultural biology that supposedly makes nutrition naturally unaffordable -- it is a problem of rigged economics and corrupt policymaking.

Solving the crisis, then, requires everything from recalibrating our subsidies to halting the low-income school lunch program's support for the pizza and French fry lobby (yes, they have a powerful lobby). It requires, in other words, a new level of maturity, a better appreciation for the nuanced politics of food and a commitment to changing those politics for the future.

Impossible? Hardly. A country that can engineer the seemingly unattainable economics of a $5 McDonald's feast certainly has the capacity to produce a healthy meal for the same price. It's just a matter of will -- or won't.