What happens if the debt ceiling bomb explodes?

A primer for Tea Partyers who think the U.S. can get away without raising the debt limit 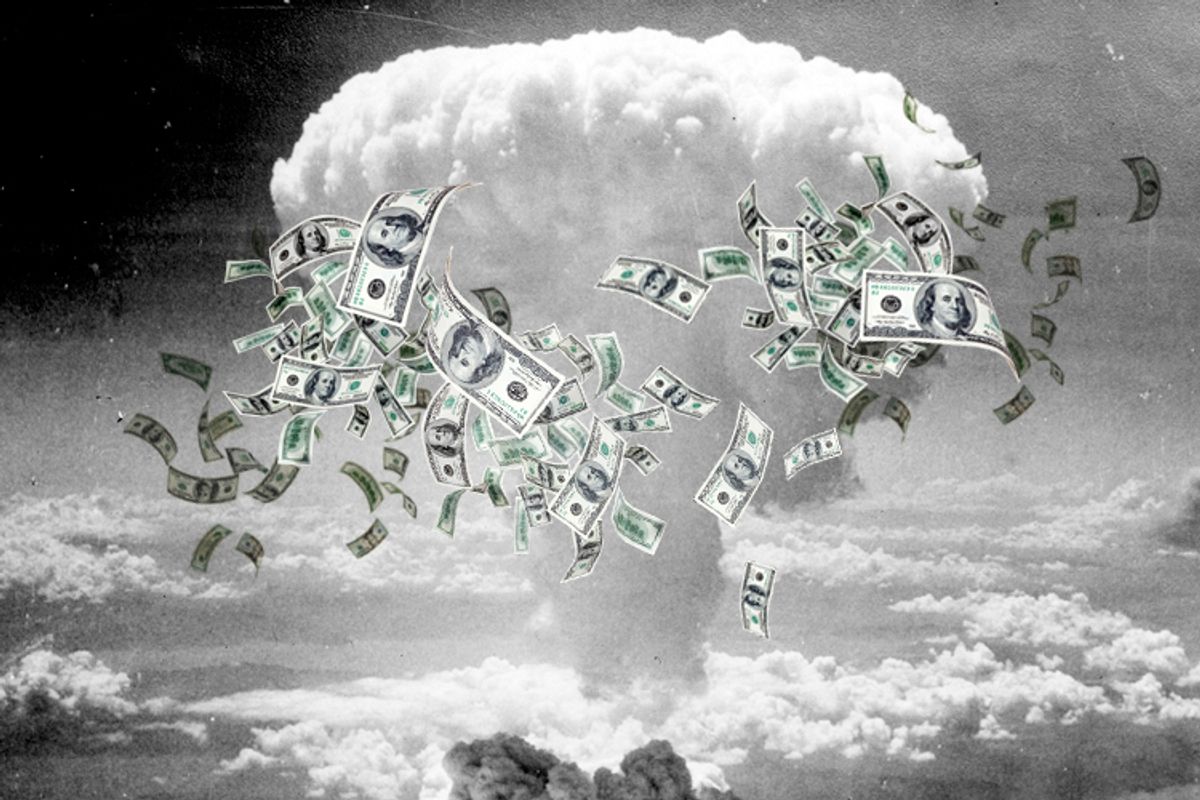 In some quarters of the American political system, there are people -- predominantly of the Tea Party Republican persuasion -- who believe that Congress doesn't need to raise the debt ceiling. If the U.S. government isn't allowed to borrow any more money to pay its bills, runs their line of thinking, that's fine and dandy. Finally, we'd be forced to tighten our belts and "live within our means!" Ignore the fearmongers predicting disaster -- they're just trying to scare markets and voters.

Well, OK, what would happen? With less than three weeks to go before the Aug. 2 deadline -- the point at which the U.S. Treasury runs out of tricks to keep government borrowing under the debt limit -- and with tension growing in Washington as Democrats and Republicans appear progressively less able to come to agreement, it's probably worth reviewing the possible scenarios.

Let's start with the basic numbers. According to the Bipartisan Policy Center, the U.S. Treasury will have about $172.4 billion in revenue in August that can be applied to $306.7 billion in outstanding bills. If the U.S. Treasury is forbidden from borrowing any additional funds, it will therefore have to cut total August spending by about $134 billion, or 44 percent.

What does that mean, exactly? Well, here's a fun game everyone can play. Click on over to this cool interactive widget at Bloomberg Government and decide for yourself who gets paid and who doesn't if Congress fails to raise the debt ceiling.

First on the list: $29 billion in interest payments on Treasury securities. Even most Republicans believe it would be a horrible idea to default on government debt. It's the kind of thing that would almost assuredly destabilize global financial markets -- perhaps as badly as the credit crunch problems of 2008, or maybe even worse. U.S. Treasury securities are considered the world's safest haven for parking cash in uncertain times. If the world's biggest economy can no longer stand behind its debt obligations, we could witness a financial panic that dwarfs the disruptions caused by the bankruptcy of Lehman Brothers.

OK, let's not do that. Next up, let's decide that we absolutely, positively must pay for Social Security benefits ($49.2 billion), Medicare ($28.6 billion), Medicaid ($21.4 billion). To do otherwise would invite immediate political annihilation. Republicans area already freaking out at hearing Obama say he couldn't guarantee Social Security checks would go out on time. What if the GOP was blamed for that?!

Hmm, what else. Oh, how about unemployment benefits ($12.8 billion)?

Whoops! We just hit $178 billion -- we're $4 billion over the limit. Let's see, who can we stiff? The unemployed? Defense contractors? The elderly poor? Chinese bondholders?

And what have we left out? How about all federal salaries, food stamps, the Justice Department, Homeland Security, air traffic control, the Centers for Disease Control, NASA, the EPA, and highway funding, for starters. And there's much, much more.

Now, there are plenty of Tea Partyers who would no doubt be happy to get rid of the EPA, food stamps, unemployment benefits, Medicaid and any number of other government spending programs. There's probably plenty of Americans who could also find better things to do with $30 billion than pay defense contractors. There are lots of different ways to divvy up government spending according to your personal priorities.

But no matter how you slice it, you're subtracting about $132 billion of government spending from the economy. Figuring out exactly what kind of economic impact that kind of cut would have is far from an exact science, but the Center for American Progress' Michael Ettlinger and Michael Linden calculated that if the U.S. government cut its spending at that rate for both August and September, GDP growth would drop by 2.3 percent from the previous quarter.

To put that kind of drop in perspective, consider that the biggest quarter-to-quarter drop in nominal GDP since 1947, when official statistics began, was 2 percent from the third to fourth quarter of 2008 -- the middle of the Great Recession, when we lost nearly 2 million jobs.

If the economy was humming along, cutting spending by such a huge amount in a short period of time would still be a major blow to overcome. When the economy is sick and barely growing, we're talking a Chinese high-speed rail ticket back to recession.

Choose your poison: global market chaos, savage cuts to the social welfare safety net or recession. Or, heck, all of the above.

And that's not all. Slower economic growth means less tax revenue, which would force even more budget cuts. Laying off hundreds of thousands of federal employees would further boost the unemployment rate. And if the U.S. government ever did end up authorized to borrow money again, the yield it would likely have to offer to attract buyers for its damaged goods would undoubtedly skyrocket -- putting further pressure on government finances. Credit rating services are already putting the U.S. on notice that a failure to raise the debt limit will result in a credit downgrade -- a development that would raise borrowing costs and increase government deficits in the long run, regardless of what the government ended up choosing to pay for.

If tempers are flaring in Washington, there's a good reason. Our political leaders have committed countless blunders over the decades, but sabotaging government finances, ruining our credit, and precipitating a recession, on purpose, would immediately rank at the very top of the list.