Thanks, Google+, for my digital meltdown

I was excited when I scored an invite to the buzzy social network. But even if I could figure it out, do I want to? 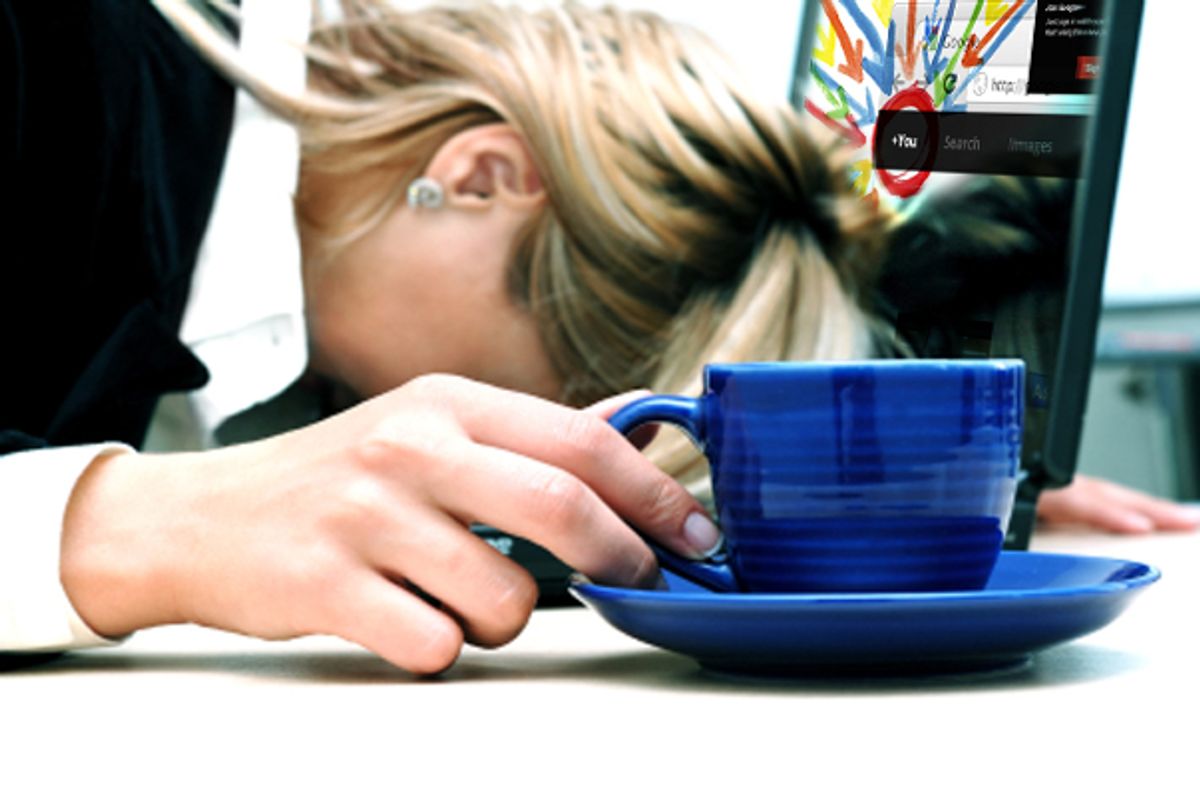 I am not cool. My husband is not cool. But like a pair of nags that has somehow managed to produce thoroughbreds, we have cool children. So cool, in fact, that the older one managed to secure for himself an invitation to Google+ -- Google's new social networking space and would-be Facebook killer -- on the first day it launched.

Because we have taught him to be compassionate and take pity on the uncool, he shared a Google+ invitation with me. The moment was the digital equivalent of his preschool days, when he'd arrive home to proudly gift me with a handmade object of unknown utility. "This is lovely," I'd say, my heart swelling as I considered the lump carefully, trying to figure if it looked more like a candy dish or a paper clip holder. "What's it for?"

When I ask the 17-year-old version of that boy what Google+ is for, he says -- texts, actually -- "its pretty sick, there're a lot of cool features thatll be awesome once more people get on. like better chatting and you can really control who sees what."

Alrighty then. Feeling positively hip, I head over, activate my invitation, upload a good-hair-day picture and type in a few simple words for my profile that seem to fit well with the spare, airy Google interface: "Writer, editor, public school advocate, parent, lover, friend, walker of dog." So far, so good.

I click "Circles" and a lovely row of them appears for me to populate -- Friends, Family, Acquaintances, Following and one helpfully left blank for me to label (Frenemies? Mean Girls? Former Crushes?) -- along with a phrase in red awaiting my click: "Find and Invite (560)."

Whoa, Google+ wants to find and invite 560 of my contacts? Hold up. Even though my son would tell me, with eyes rolling, that only losers click on "find all" menu options like that, it's a potent reminder that I'm starting down the slippery slope of adding yet another social medium into my already overwhelmed digital life.

I say that as a woman teetering on the brink of an electronic messaging meltdown. I have 150 unprocessed messages on Facebook, 258 texts on my cellphone and -- I am not proud of this -- 47,185 emails in my Gmail inbox.

Because I have failed to organize my 221 Facebook friends or the 551 people I follow on Twitter into any kind of order, a wave of random digital news washes over me hourly, with updates from my former high school band director, my boss's boss's boss, an eco-activist organization to which I once gave $10, Anthony Bourdain, my youngest brother's former girlfriend and my dog all arriving in an unending, unedited stream. (Yes, the dog has her own Facebook page, don't ask.) Last week a new contact on LinkedIn emailed me to helpfully point out that my Career Summary there is more than a year out of date. I'll get right on that.

Now Google+ wants me to interact in a new, groovy way with 560 people? No no no.

Truth be told, I feel a little resentful toward Google+, even as I admire its pretty circles. It took me a long time to "get" Facebook, just as it took me a long time to get Twitter, and LinkedIn, and before that to get the hang of blogs -- of just being online, in all its nuanced permutations. I work hard at being what used to be called a "good Netizen" -- reading the links that people share, commenting thoughtfully on blog posts, pausing to consider honestly before I "like" something. It's exhausting trying to keep up.

Now Google+ comes along, threatening to topple Facebook and dismantle my little world in the process. At some point in the future, a tech innovation is going to come along that I just can't grasp. And there I'll be, alone and pathetic, like the last MySpace user on the site.

With that specter hanging over my head, I can't bring myself to delete my Google+ account, but neither do I have the emotional energy to start populating my circles. Instead, I hang out there by myself and putter, add a few pictures, type in a status update or two that nobody can see. It's like having a blog that nobody reads, or scoring a backstage pass to Lollapalooza and then spending all your time hiding behind a wall of speakers. Actually, it's oddly pleasing to hide out online, like being in a tiny, private eye of the very large storm that is the Internet. I feel happy in my cocoon -- I'm there but not yet there.

Of course, it doesn't last long. Because I'm using Google+'s default settings, people can still see my name, even if they can't creep on my profile or read any status updates. So it's only a matter of hours before I start seeing a trickle, and then a deluge, of notifications in my Gmail box that one person or another has added me on Google+. Sigh. Here we go again.

Still, there was a brief moment there when my digital persona was truly hip for once in my online life: "I'm so cool, I have a Google+ account that's entirely private." I even considered messaging that to my son -- via Facebook, our preferred method of communication -- but why bother? He'd moved on already.

Tracy Mayor is a contributing editor at Computerworld.com and Brain,Child magazine and author of the parenting humor book "Mommy Prayers".