Where have all the war protesters gone?

The largest demonstrations ever have largely dissipated, even as we've launched new wars. Why a movement sputtered 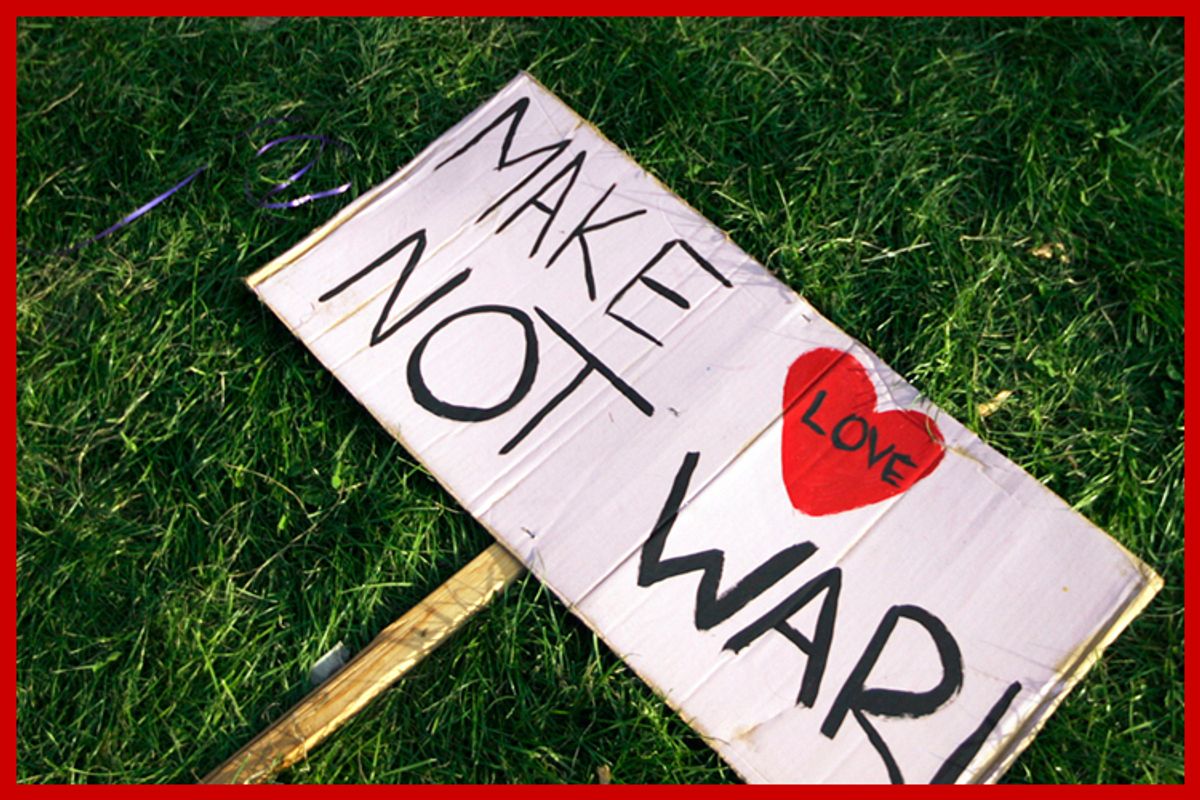 The outrage that greeted the run-up to the Bush-Blair Iraq war debacle generated what must have been the largest antiwar rallies and demonstrations in the history of the world. Sometimes in subzero temperatures, millions of marchers in New York, London and elsewhere took to the streets to interrupt the roar of self-righteous crypto-imperial bravado, to barge through George Bush's strutters' ball and its fevers of fantastical, deceptive and self-deceptive claims about Saddam Hussein's danger to the United States and Washington's promise to parachute democracy into Saddam's stricken land. In the well-chosen words of one London sign, the marchers were "Shocked, Not Awed."

Then the marches stopped.

They stopped partly because the antiwar leadership was barely cobbled together, with some conspicuous quarters reluctant to speak harshly of the multi-murderous Saddam Hussein. The movement's drawing power was limited from the start, and then, once the war was on in earnest, it felt -- realistically -- that it had run smack against the brick wall of George Bush's manic pigheadedness. Demonstrators are unlikely to invest their energies in what look from the start like very lost causes. And the demonstrations also tailed off because the mainstream media didn't pay attention -- refused to pay attention. The story line they were promoting was: America kicks ass, new era begins!

Do not neglect the new wars' insulation from the American population, either. A volunteer army, disproportionately staffed from rural areas, is an army insulated from the more vocal, influential sectors of the country. By the same token, drone wars in Yemen and Somalia take place behind thick curtains, with some effectiveness against hated jihadis, and the offstage moans are muffled. For the vast American majority, ordinary life goes on -- business as usual. For that matter, too, it's troubled business, with many people beleaguered by what feel like the more urgent cares of joblessness and eviction. Paradoxically, perhaps, a more prosperous country is better available to resist its own wars.

But also, in the new century, once war was on in earnest, the demonstrations dwindled because many former or potential demonstrators gravely doubted how nice the outcome would be if the expeditionary forces left -- or at least, lacking a tragic sense, downplayed the human costs of withdrawal. This was true for Iraq as it had earlier been true for Afghanistan, where the pro-war momentum of October 2001 was fueled, at the start, by the direct connection of the Taliban with al-Qaida. But once al-Qaida was on the run (mostly over the border to Pakistan, as was predictable) it was hard to summon the will, the clarity, the intensity, the downright buoyancy of a street movement when one harbored a fear -- sometimes acknowledged, sometimes not -- that the victors in the case of an American defeat would be foul. In Afghanistan, they would be the burqa-enforcing Taliban committed to barring girls from school. As for "Iraqi Freedom," Iraq with a zeroed-out American presence looked more like civil war between Shia fanatics and Baathist holdovers, garnished with torture.

During the Vietnam War, when the antiwar movement was challenged with the question -- meant to be rhetorical -- How can we leave? our common reply was, On ships. In the case of Vietnam, that was the right and sufficient answer. The aftermath of that hideous war was always going to be awful -- and it was going to be the same kind of awfulness whether the United States accepted elections to unify the country in 1956, as the Geneva Accord required; or the U. S. had withdrawn in 1963, when Kennedy flirted with the idea; or not until 1975, as it came to pass. The Vietnamese Communists were always going to win, were going to reunify the country, were going to install a Communist government in the South, were going to set up so-called reeducation camps and the whole apparatus of dictatorship. They would have done so, given the chance, in 1956 or 1963, though if the war had ended then, some 3 million more Vietnamese would have stayed alive.

The domino theory that served to rationalize the Indochinese wars for years was always a fraud. The dominoes were the former French colonies of Indochina -- and no more. As Vietnam went, so went Laos -- and, horrendously (in no small part because America dragged Cambodia into the war), the Khmer Rouge genocide that was, in fact, opposed and finally halted by the Vietnamese army itself. The scare scenario in which all Southeast Asia would be dragged over the precipice -- Thailand! Indonesia! Malaysia! Australia! -- was always nothing more than a phantasmagorical nightmare in the fevered brains of Cold War fanatics.

By contrast, the case of Afghanistan, what was originally a just war of self-defense against al-Qaida -- indeed, a "war of necessity" -- devolved into an incoherent morass. Where was the necessity to shore up the corrupt, feckless government of Hamid Karzai facing a porous border and official Pakistani connivance? Was the Afghanistan intervention supposed to avert a 21st-century cascade of dominoes? We couldn't leave, it was said, because leaving would empower jihadis. But on those grounds, should the United States have stayed in Lebanon in 1983? Ronald Reagan didn't think so. And would a NATO pullout encourage violent jihadis in other Muslim countries any more than an American occupation of Afghanistan? Were millions of dollars and thousands of lives needed to crush a few hundred remnants of al-Qaida, obviously a stateless network already regathering in Pakistan, Somalia and Yemen?

As for Libya, hardly any opponents of the NATO war are enamored of Col. Gadhafi, but the war is largely out of sight and the bodies don't wear NATO uniforms. America's air bombardment of Vietnam, Laos and Cambodia came into the sights of an antiwar movement that had already reached critical mass while thousands of American soldiers were being killed. So far as NATO is concerned, this war is all bombardment, and the rebels have a very good press.

Anyway, "out" is not a plan -- it is a goal, though not a utopian one. Pull out and there will still be avoidable suffering. As always in the actual world, there is that nettlesome problem of ends and means. Some ends justify some means. Just as the mindless apostles of purification claimed clean hands on the way in, there is sometimes a tendency to say that since we, the antiwarriors, aren't the ones who got in, it's not our responsibility to explain how to get out. Since we shouldn't have been there in the first place, our hands are clean. But there are no clean hands -- for anyone -- on the way out. In a fine essay in a 2009 book edited by Michael Walzer and Nicolaus Mills, "Getting Out," the Indian political scientist Rajiv Bhargava argues quite carefully that if the British had stayed in India one more year, and done the right things, the subcontinent could well have been spared the horrible war of partition that cost hundreds of thousands of lives.

The military attacks now underway, in Libya and elsewhere, will mainly be fought by elite units -- Special Forces, Navy SEALs, drone commanders -- operating from far-flung American bases, without any civilian call-up. Any revulsion by well-informed citizens against what they do is counterbalanced by popular satisfaction at their successes, by their virtual invisibility, and the unpleasantness of their intended targets. These are not recipes for popular commotion -- let alone opposition.

Todd Gitlin's most recent books are "The Chosen Peoples: America, Israel, and the Ordeals of Divine Election" (with Liel Leibovitz), and a novel, "Undying."