Petraeus hands over command in Afghanistan 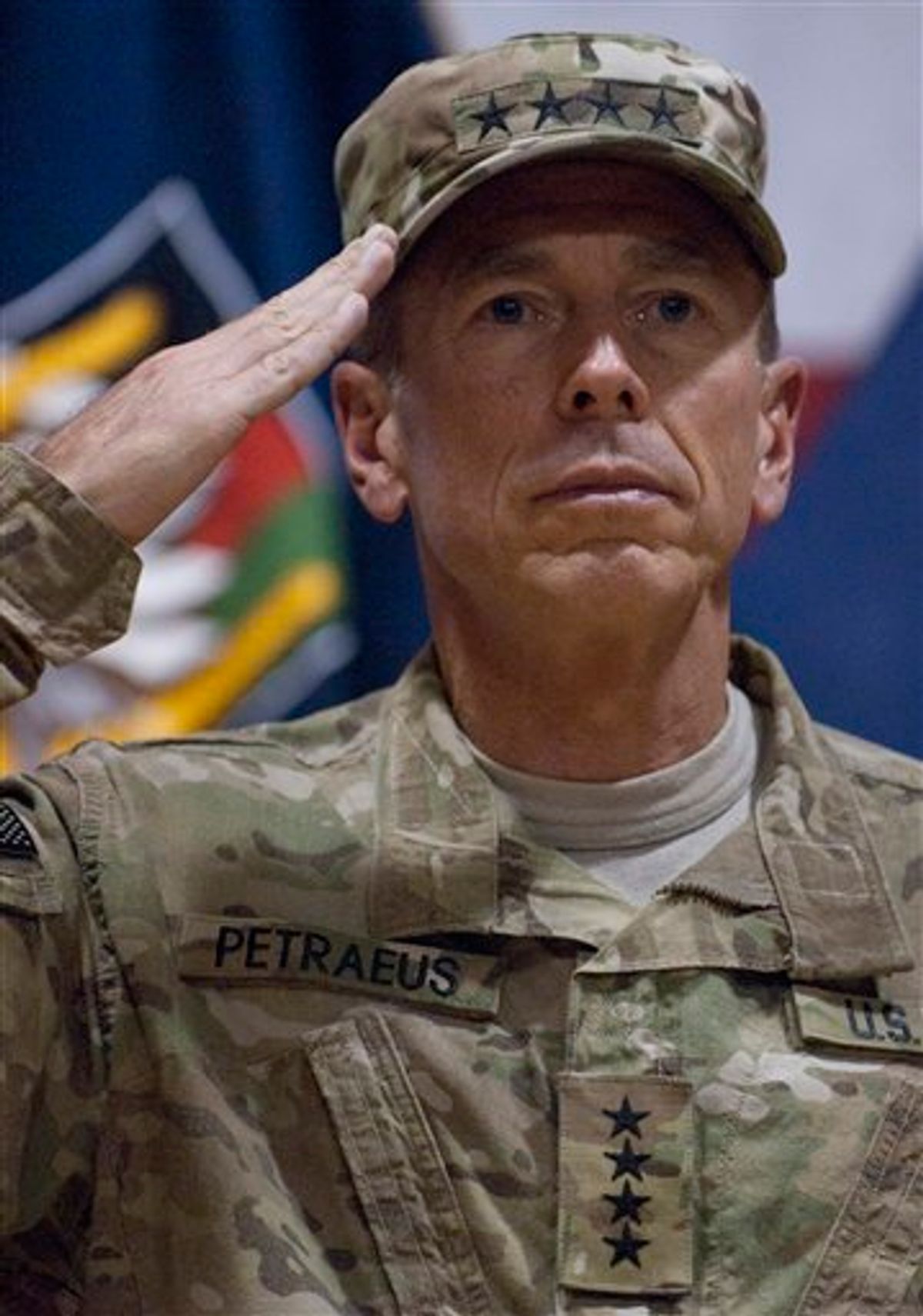 Gen. David Petraeus handed over command of American and coalition forces to Gen. John Allen on Monday, ending a year that saw the costly counterinsurgency strategy he espoused and implemented coming under increasingly heavy criticism.

Petraues steps down at a time when the international forces he commanded have begun transferring responsibility for the 10-year war to the Afghans and the United States has started withdrawing nearly one third of its 100,000 troops in the country. Violence has also spiked, with insurgents carrying out attacks against high-profile Afghans, including the assassination last week of President Hamid Karzai's powerful half brother and the slaying of a close Karzai aid on Sunday.

As Petraeus departs, it is unclear whether his signature counterinsurgency strategy -- with an emphasis on protecting the local population and decisive strikes against insurgents -- has made Afghanistan any safer. Violent attacks have continued, though international military officials argue they are not as widespread or as intense as they would have been otherwise.

His commanders in Afghanistan have employed a strategy that brought some success in Iraq -- coupling military force with an ambitious, troop-intensive plan to push insurgents from their strongholds so the local government could build a system of services and institutions to win the loyalty of the people.

It hoped to create the necessary groundwork for a process of reconciliation and reintegration to encourage insurgents to re-enter Afghan society.

But the plan has been costly, with the United States now spending about $10 billion a month to fund the effort in Afghanistan. Some of his detractors have argued that a more aggressive special operations-centered counterterrorism strategy may be more effective.

In his farewell address, Petraeus said that despite progress made in southern Afghanistan, there was still much work ahead for his replacement.

"Even as we note the hard fought progress of the past year and commence the transition process, we should be clear-eyed about the challenges ahead," he said, adding that Afghan and coalition forces "are clearly engaged in a tough fight."

He said the campaign against the insurgents was made even more difficult "when the enemy can exploit sanctuaries outside the country," a parting shot at neighboring Pakistan. The military has often accused Islamabad of not doing enough to fight insurgents taking refuge in Pakistan's lawless tribal areas along the border. That fight, along with America's fractured relationship with Pakistan, will be one of Petraeus' key issues as he takes over as director of the Central Intelligence Agency.

"The progress you have made has not been without sacrifice. There have been tough fights, tough losses along the way, setbacks as well as successes," Petraeus said. He added that he was departing "encouraged by the progress, aware of the hard work that lies ahead and hopeful for the future."

Allen, who officially took command at a ceremony in Kabul on Monday morning, said the drawdown of U.S. forces that started earlier this month and the transition of some areas to Afghan control this week does not mean that international forces are easing up in their campaign to defeat the Taliban insurgency.

"It is my intention to maintain the momentum of the campaign," Allen said at the handover ceremony in the Afghan capital. He acknowledged, however, that the fight won't be easy.

"There will be tough days ahead. I have no illusions about the challenges," said Allen, who was promoted to a four-star general shortly before the handover ceremony.

Adm. Mike Mullen, chairman of the Joint Chiefs of Staff, lauded Petraeus's work but also said that "a lot of hard work, deadly work remains before us."

He said that during the past year under Petraeus "I have never seen our progress more real and our prospects more encouraging."

The insurgents, Mullen said, have "been dealt heavy blows over the last year. They have been pushed out of sanctuaries, they have been denied influence over local populations, they have been hounded and hunted, their leaders killed or captured by the score, their resources diminished and their training disrupted."

Petraeus, who is retiring from the military, and American officials in the U.S. have trumpeted success in reclaiming Taliban strongholds in southern Afghanistan and training Afghan security forces as signs that they are finally making progress toward peace in Afghanistan. But violent attacks have continued, including a number of high-profile assaults and assassinations in recent weeks.

On Monday morning, a bomb killed three international service members in the east, NATO said in a statement. It did not provide nationalities or further details. Most of the troops in the east are American.

At least 37 international forces have been killed so far this month in Afghanistan.

In the south on Monday, a roadside bomb killed a district police commander and his driver.

Wali Mohammad, the police chief for Argistan district in Kandahar province, was driving to work when his vehicle struck the explosive, said Sher Shah Yosufzai, the provincial deputy police chief.

The handover ceremony in Kabul came just hours after security forces in the capital killed the final attacker in the assassination of a close adviser to President Hamid Karzai.

The Taliban claimed responsibility for that attack, in which two assailants gunned down Karzai adviser Jan Mohammed Khan and a parliamentarian he was meeting with in his house. One police officer was killed, the Interior Ministry said.

It was the second important Karzai ally in the south to be killed in the space of seven days. On Tuesday, Karzai's half-brother was gunned down by a close associate in Kandahar city. The Taliban also claimed responsibility for that attack.

Khan was governor of the Pashtun-dominated Uruzgan province in the south from 2002 until March 2006 and has remained influential in the area. Though he was often labeled a warlord and a thug by the international community, presidential spokesman Waheed Omar said Karzai considered him a key partner in the south and a bulwark against the Taliban.

"Jan Mohammed Khan was one of the most influential leaders in the south, especially in Uruzgan," Omar said.