Warren's Massachusetts prospects aren't as bright as you might assume

Elizabeth Warren looks poised to run for the Senate in Massachusetts, but her odds aren't as good as you think 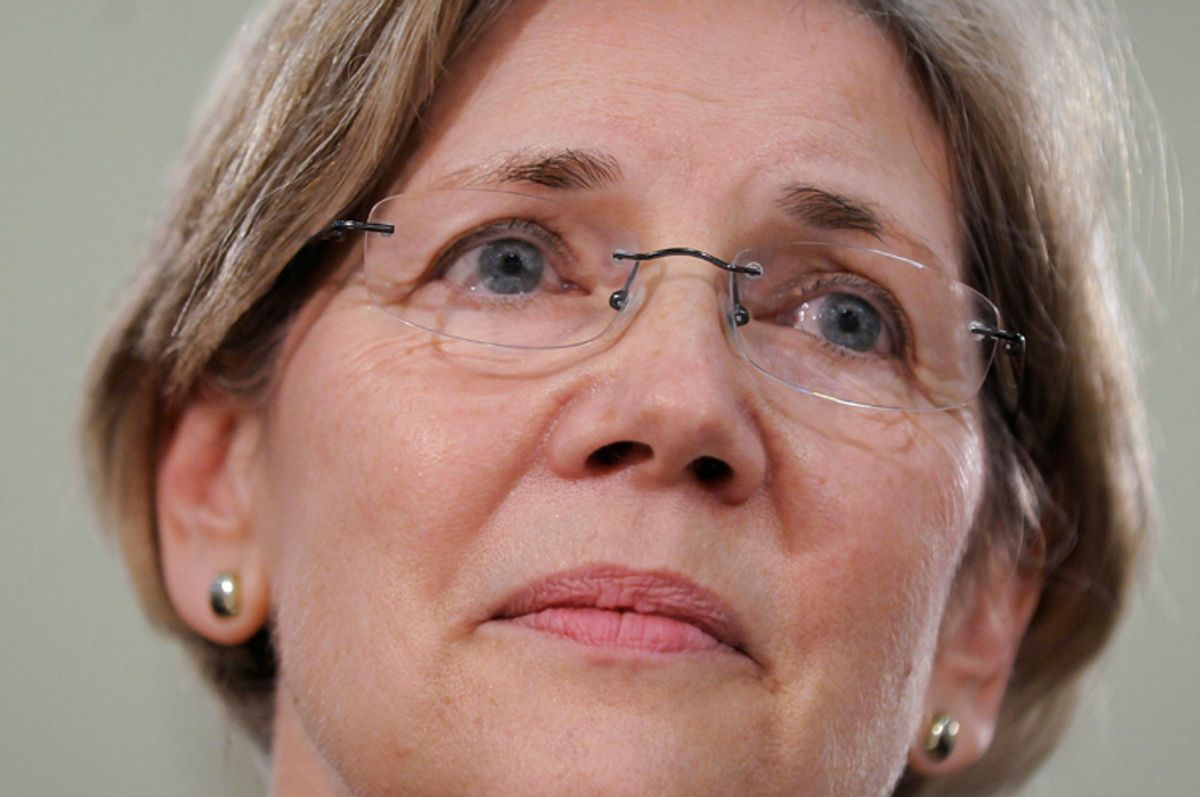 Elizabeth Warren, Assistant to the President and Special Advisor to the Secretary of the Treasury, listens to a question as she testifies at a hearing about oversight of the Consumer Financial Protection Bureau of the U.S. House Oversight and Government Reform Committee on Capitol Hill in Washington, May 24, 2011. REUTERS/Jonathan Ernst (UNITED STATES - Tags: POLITICS BUSINESS CRIME LAW HEADSHOT) (Â© Jonathan Ernst / Reuters)
--

Now that she's officially been passed over to head the Consumer Financial Protection Board, Elizabeth Warren seems likely to run for the U.S. Senate in Massachusetts, where Republican Scott Brown's seat will be up in 2012. "If she gets in," NBC's First Read opined on Monday, "it could rival Kaine-Allen as the marquee Senate race of 2012."

Warren is certainly popular among progressive activists who follow Washington closely, who see her as an unusually smart, principled and assertive thorn in Wall Street's side. Of course, Senate Republicans fear her for the same reason, which is why President Obama opted not to nominate her to run the CFPB. As a candidate for office, it's likely that Warren would enjoy significant financial support from her national fans.

And it's also true that the Democratic field now taking shape in Massachusetts is, as Robert Kuttner put it, "stunningly weak." The current crop of candidates includes a suburban mayor who's been on the job for just over a year, a one-time state senator whose last campaign (nine years ago) ended with a fourth-place finish in a gubernatorial primary, an activist who was part of the worst-performing Democratic ticket in Massachusetts history, and the guy who finished (a very distant) third in the Democratic primary for the special election in which Brown won his seat in 2010. The chairman of the state's Democratic Party, John Walsh, is now openly urging Warren to enter the race, and -- even though she's not exactly a household name right now -- it's not hard to imagine her winning the nomination to oppose Brown.

But that's where things get tricky. Democrats like to tell themselves that Brown is beatable simply because Massachusetts has such pronounced Democratic tendencies. Before Brown's victory last year, no Republican had won a Senate election in the state since 1972, and it's been 17 years (and counting) since a GOP candidate won a U.S. House race. With the presidential race at the top of the ticket, turnout should be much higher next fall than it was in the January '10 special election, with the vast majority of those new voters likely supporting Barack Obama. The Democrats' theory is that this Obama support will trickle down to their Senate candidate, erasing the 5-point margin that Brown won by in '10 and returning the seat to Democratic hands.

But if it were this easy, why is the party having such trouble attracting a candidate? Gov. Deval Patrick has ruled out running and no one from the all-Democratic congressional delegation is interested. Neither is Marty Meehan, the still-ambitious former congressman who is sitting on a $5 million war chest. Their reluctance speaks to a reality that Democrats don't like to admit: In his 18 months on the job, Brown has skillfully separated himself from his party's national brand and emerged as the most popular politician in Massachusetts. It may be true that his simple presence in the Senate serves to empower conservative Republicans who themselves would be intensely unpopular in Massachusetts and that Brown is mostly a reliable Republican vote. But that's not what most swing voters in Massachusetts apparently see. They like Brown personally, enjoy his style and -- thanks to several high-profile and well-timed breaks with the GOP leadership -- consider him an independent voice, not a Republican drone.

It's probably true that, despite their warm feelings for him, a chunk of voters will vote against Brown next year simply because of his party label. If he were running for governor, where the taint of the GOP's national brand wouldn't really be an issue, Brown's current poll numbers would put him on course to score the kind of rout that William Weld enjoyed in 1994. As a Senate incumbent, though, his ceiling is lower. But low enough to make him truly vulnerable? Again, the absence of interest from established Massachusetts Democrats speaks volumes.

There's probably another reason Brown hasn't yet attracted a top-tier foe: the increasing speculation that John Kerry will succeed Hillary Clinton as secretary of state in a second-term Obama administration (if there is one). If Kerry were to resign his Senate seat, Patrick would be empowered to make an interim appointment (likely another Paul Kirk situation) while a special election campaign played out. At least from this vantage point, this looks like the race worth waiting for, especially for incumbent congressmen (who wouldn't have to give up their seats to run).

This doesn't necessarily mean that Elizabeth Warren would be making a mistake to run now. There's always the chance she could win, and even if she didn't, a strong showing against Brown could position her to try again (maybe for Kerry's seat, maybe for another office). But there's also a risk that Brown is simply too popular and that Warren would end up losing by a wide margin -- one that would preclude a future effort.

For a cautionary tale, she might consult a man named Mark Roosevelt, who was an up-and-coming Massachusetts state legislator in the early '90s. In 1994, he decided to make his move, taking a Democratic nomination for governor that no established Democrat wanted and figuring that the state's partisan tendencies would propel him to victory, or at least a respectable, career-enhancing showing. But after a 42-point loss to Weld, his political career was over and he left the state a few years later. Last I checked, he was running a small college in Ohio.