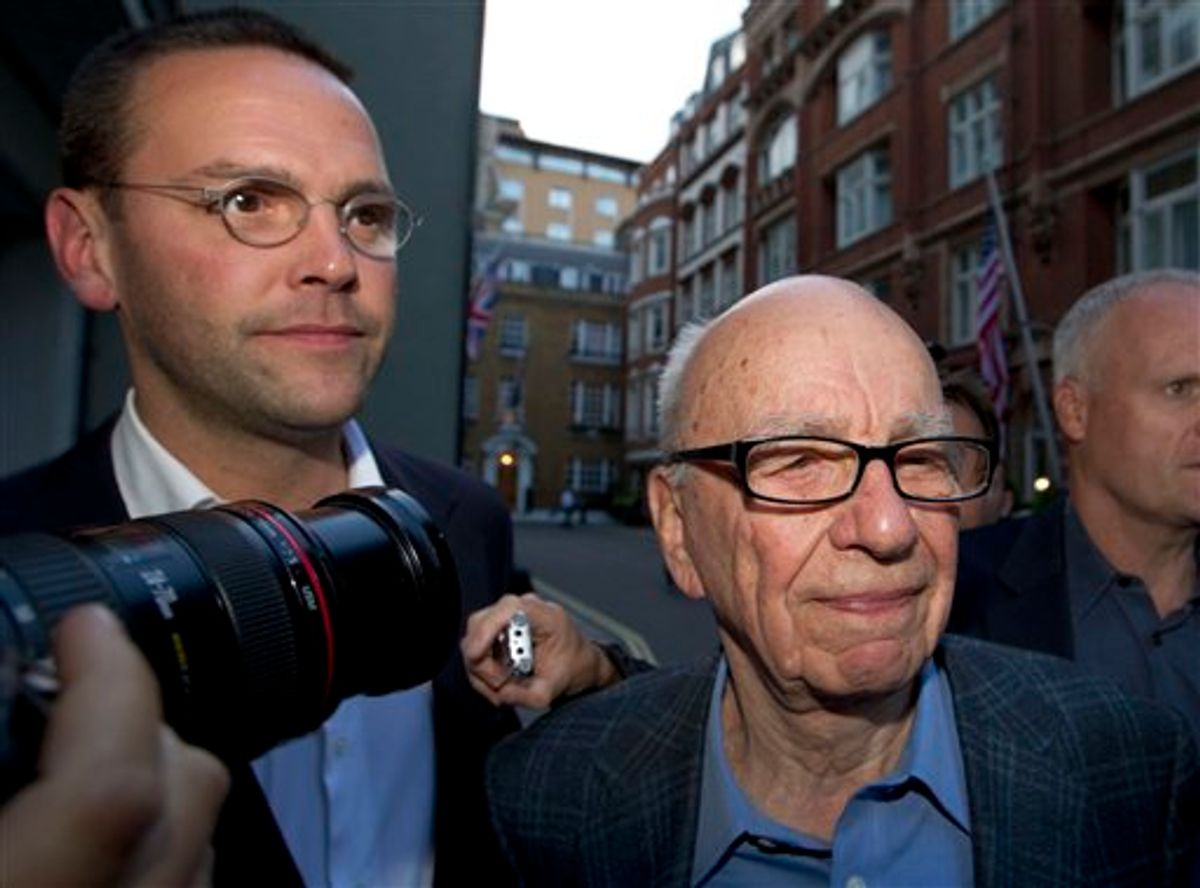 Chairman of News Corporation Rupert Murdoch, right, and his son James Murdoch, chief executive of News Corporation Europe and Asia arrive at his residence in central London, Sunday, July 10, 2011. News of the World cease publication with Sunday issue the last. News of the World is accused of hacking into the mobile phones of crime victims, celebrities and politicians. (AP Photo/Sang Tan) (AP)
--

The Wall Street Journal says we should all take a deep breath and relax about the whole "phone-hacking" thing that is currently roiling Great Britain. It's not a big deal, News Corp.'s widespread criminality. It's just a silly English craze, like Girls Aloud, or binge drinking.

Fox News says we should stop worrying about the News of the World (which it suggests was actually the victim of some sort of "hacking") and worry instead about ... other hacking, that isn't related to News Corp.

I think it's time for a quick refresher: News Corp. is accused of not just phone-hacking but also bribery of police officers and illegal access to private medical and banking records, obtained with the assistance of multiple private investigators and a convicted con artist. The crimes may not have been limited to the now-shuttered News of the World, but may have also included the Sunday Times. News Corp. withheld information from Parliament and paid hush money to hacking victims in order to avoid making the extent of its crimes public. People in charge of the News of the World during the hacking and the coverup of the hacking went on to much more powerful and influential positions in News Corp. and in the current Conservative government. The Guardian's suggested questions for Rebekah Brooks, James Murdoch and Rupert Murdoch are also a good summary of the scandal as we now understand it.

In other words, the most outrageous and disgusting revelation -- that a murdered girl's voice mail was hacked -- is actually not the most serious crime that News Corp. is accused of. And that revelation does not even take into account the lengthy coverup.

The commissioner of the Metropolitan Police (Britain's top cop, in tabloid parlance) has now resigned because of News Corp.'s corruption of the Met. In his resignation he pointedly criticized Prime Minister David Cameron, who is personally close to Rebekah Brooks and who hired former News of the World editor Andy Coulson as a top aide. The commissioner's resignation was followed by that of Britain's top counter-terrorism official.

This isn't an aberration, either. This is News Corp.'s corporate culture in action. David Carr points out that News Corp.'s disregard for silly "laws" and "regulations" extends to its American operation, and a News America executive whose anti-competitive practices cost the company hundreds of millions of dollar in settlement money was punished by ... being named the publisher of the New York Post, and head of News America.

So right now, no one is remotely guilty of overreacting. In fact, everyone is behaving the way they really should have behaved years ago, when the Guardian first began reporting on all of this. News Corp. blamed one stooge and then went about its business under the assumption that it was too powerful in the U.K. to ever take responsibility for its actions. They were almost right, too!