The Republican plot to turn the U.S into Greece

The best recipe for Athenian-style chaos? Cutting government spending too deep and too fast 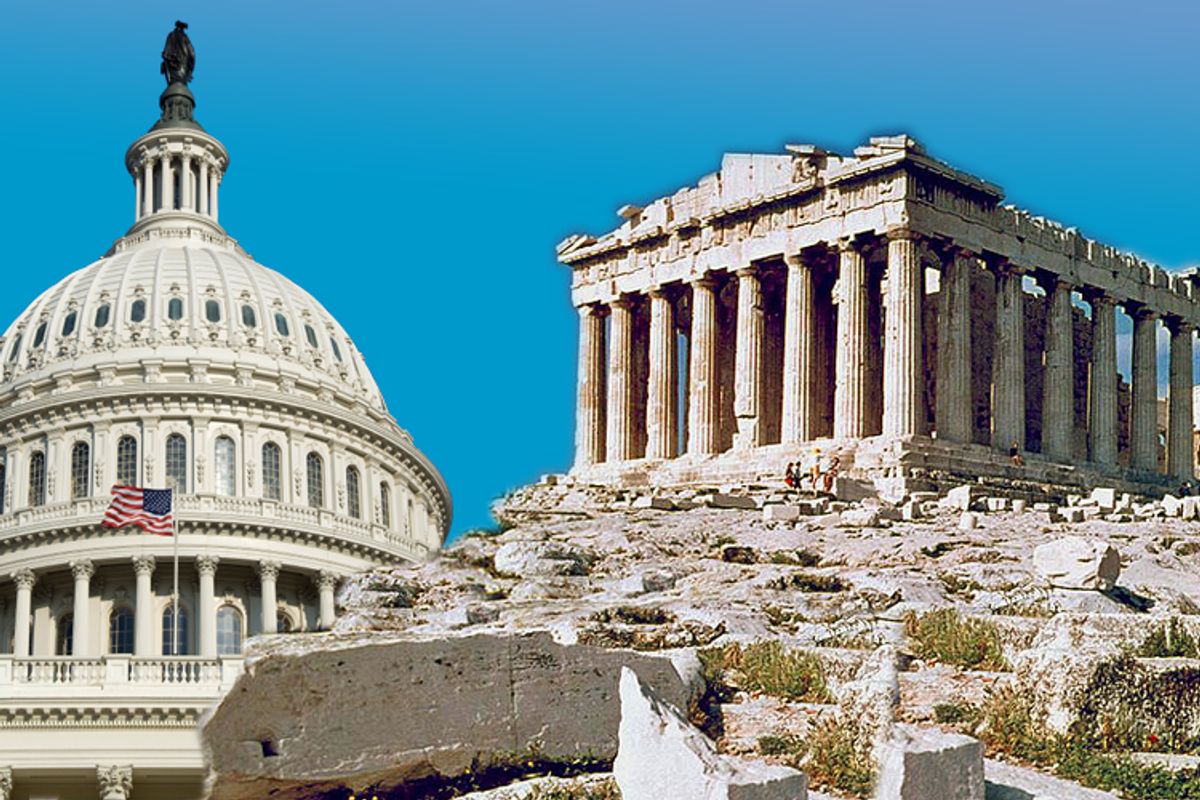 It has become fashionable among Republican politicians to warn that if the United States does not speedily get its fiscal act together, it is in danger of becoming another Greece -- plagued by impending bankruptcy, riots and general dysfunction. On Sunday, Sen. Lindsey Graham, R-S.C., was merely the latest to sound the alarm.

Graham, in turn, said that the real threat to the nation is the burden of unsustainable debt.

"What is calamitous is the path we're on as a nation," he said. "We're becoming Greece."

The U.S. has extremely low interest rates and foreign investors are happy to loan us money; Greece has extremely high interest rates and no one is eager to loan the country money. The U.S. has our own currency; Greece has the Euro. We have a great credit rating (for now); Greece has an awful credit rating. We have a manageable debt; Greece has a debt crisis. We're a large country with an enormous economy; Greece is a small country with a small economy. We have one of the world's most stable systems of government (at least until six months ago); Greece's government structure is a little shaky.

The importance of having one's own currency cannot be overstressed. The U.S. is in control of its own economic destiny. If need be, the U.S. can always print more cash to pay its debts. Sure, that will cause inflation, upset our creditors and trading partners, and impel politicians like Graham to swap in mentions of hyperinflation in Zimbabwe and Weimar Germany for Grecian debt, but the point is that U.S. has options. Greece doesn't.

However, upon further reflection, I'm wondering if perhaps Graham was inadvertently speaking the truth. Because if we follow the Republican prescription for dealing with our debt -- huge spending cuts in the middle of a slowing economy -- we do run a very high risk of becoming Greece.

Greece offers a textbook example of what happens when you enforce austerity measures during a weak or recessionary economy. In March 2010, as part of a bailout deal with the European Union, Greece imposed a radical austerity program, including pension cuts, a four-year hike in the retirement age, pay cuts for public workers, cuts in defense spending, and a raft of regressive tax hikes.

The result was entirely predictable. Unemployment surged: Before the introduction of austerity measures, the Greek unemployment rate was 11.6 percent; in June 2011 -- 16.5 percent. A deepening recession depressed tax revenue collections, resulting in budget deficits considerably bigger than had been projected. The all-too-inevitable next step: Another package of austerity measures, designed to ensure another bailout, and guaranteed to hammer Greece's economy even harder.

We can easily try this experiment at home in the United States. All we'd have to do is fail to raise the debt ceiling, and immediately cut government spending by 40 percent. If we want riots and higher unemployment, just like Greece, that's exactly the way to go about it.