How to sell Big Oil on the Web 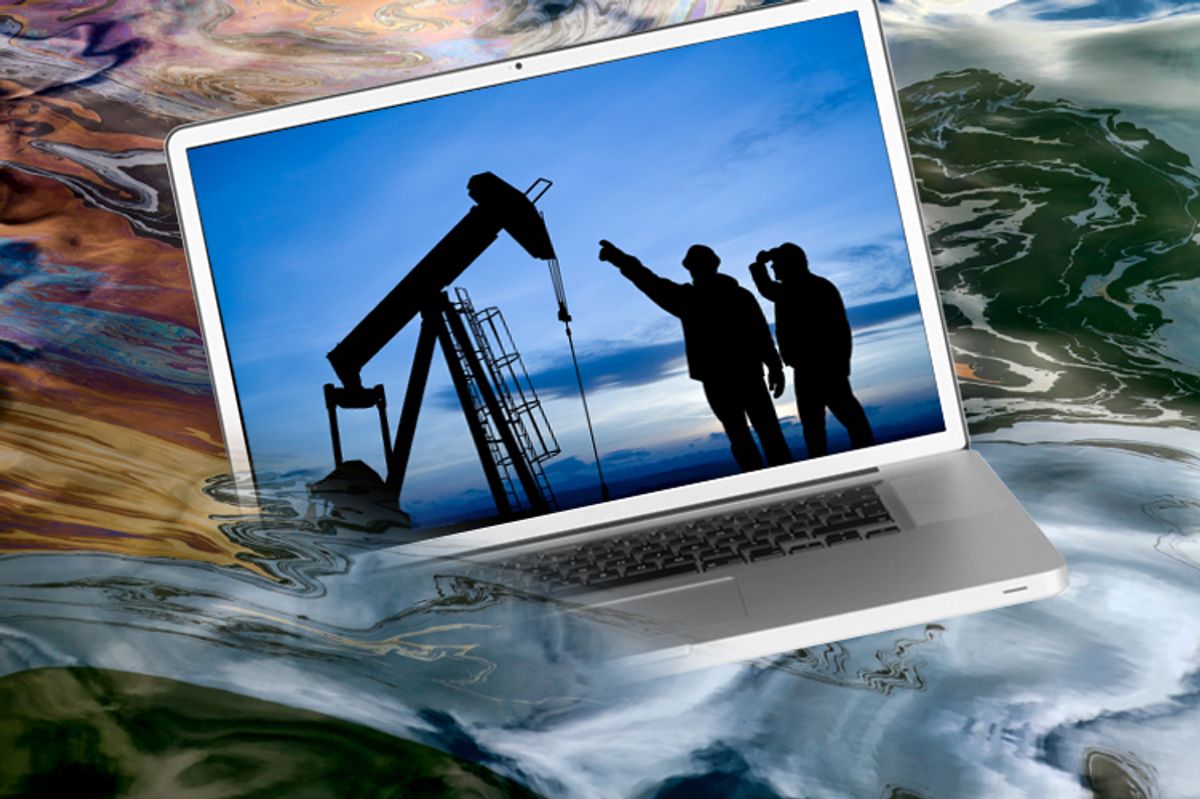 The oil giant Chevron, with $6.2 billion in profits in the first quarter of 2011, has for the past year been engaged in an intense branding campaign called "We Agree," which presents Chevron as a model corporate citizen and steward of the environment. Trying to soften the public image of a company without actually changing destructive business practices is known as "greenwashing" -- and Chevron has been at it for a while.

But in today's media universe, billboards, TV ads, and even Web videos, are no longer enough. That's where the New Jersey firm Social Media Today steps in. I was accidentally sent a confidential presentation for Chevron from a Social Media Today representative I'd earlier corresponded with on another story. It pitches the oil company on a project to build an entire website that apes journalistic outlets in form and appearance but is ultimately committed to advancing Chevron's goals. The presentation offers a window into the frontiers of greenwashing and corporate messaging on the Web.

The website would be called "Future Mobility" and provide a forum where interested bloggers (and Chevron executives) can discuss transit issues like high-speed rail and urban infrastructure. As part of the pitch, Social Media Today even offered Chevron "recruitment and access" to a top official at the environmental group the Natural Resources Defense Council.

The slideshow sent to Chevron, which I've posted below in full, is a jumble of buzzwords. But here's the gist: Instead of having to duke it out in the comments sections under news articles or in other neutral online forums, the company bypasses all that by simply creating its own forum. It will be open to writers with a range of perspectives (and much of the site would be aggregated material from elsewhere), but the overall mission of the site is to advance Chevron's messaging efforts through so-called "premium content." Articles from the site will show up on Google searches. "Influencers" in the field will be influenced. And Chevron will come across as "innovative, open, responsive, [and an] investor in the future."

The pitch gives a nod to "editorial independence" but also promises that the site will "provide a communication platform for Chevron experts and executives" and have "content alignment to Chevron goals." It's not at all clear how those latter concepts are compatible with editorial independence. Other promises in the pitch include: blogging training for Chevron employees and alerts sent to Chevron in "real-time to sensitive content and actionable site activity." Deron Lovaas, NRDC's federal transportation policy director, did not immediately respond to a request for comment. But Social Media Today CEO Robin Carey told me that the company would merely recruit Lovaas to participate in the Chevron site. "By saying 'access' I didn't intend to oversell our ability to influence anybody at the NRDC," Carey said.

Lovaas already contributes to another Social Media Today site, the Energy Collective, which is sponsored by Siemens, a major player in the nuclear power industry and other energy sectors. (I wrote about the Energy Collective earlier this year when it published a viral blog post arguing that the Fukushima disaster would not lead to "any significant release of radioactivity." Events quickly proved that claim wrong.)

Carey, who previously worked in advertising at the Washington Post, stressed in our interview that Chevron or other clients would not be permitted to edit contributors' blog posts or restrict access to particular people. She also said Future Mobility is being pitched to other companies, not just Chevron.

She said the phrase "content alignment to Chevron goals" was meant in the broadest sense. "If they're interested in mobility we'll devise a series of webinars on mobility," she said, as an example.

So what else does the client get out of the Future Mobility site? The pitch explains: (Not that Chevron actually has to be any of those things -- but it will be viewed that way.)

And here the pitch touts access to "the most recognized outside influencers": Chevron did not respond to a request for comment. The pitch was emailed by Carey last week to Morgan Crinklaw, a Chevron spokesman and former flack for the Republicans in the California state assembly.

"Gentlemen, Great to have the chance to speak," she wrote. "As we discussed, by addressing the larger issue of mobility, globally, Chevron stands to be a leader in a way that its competitors have not attempted. We think this will not only be seen as innovative, but ultimately, will be a more valuable use of communications and marketing resources, by attracting a larger potential audience of Global Influencers."

Here is the full slideshow:

UPDATE: Crinklaw, the Chevron spokesman, sends over this statement distancing the company from the presentation:

The proposal you referenced in your story was not requested by Chevron nor was it created on our behalf. The company receives advertising and sponsorship solicitations from a variety of sources on a regular basis. The presentation you received is an example of one such sponsorship opportunity and does not necessarily reflect any action Chevron may take.

I had no knowledge of this campaign and did not provide permission for my blog Green Flow to be used in such a promotion (though my writing is syndicated by Social Media Today's "Sustainable Cities Collective.").