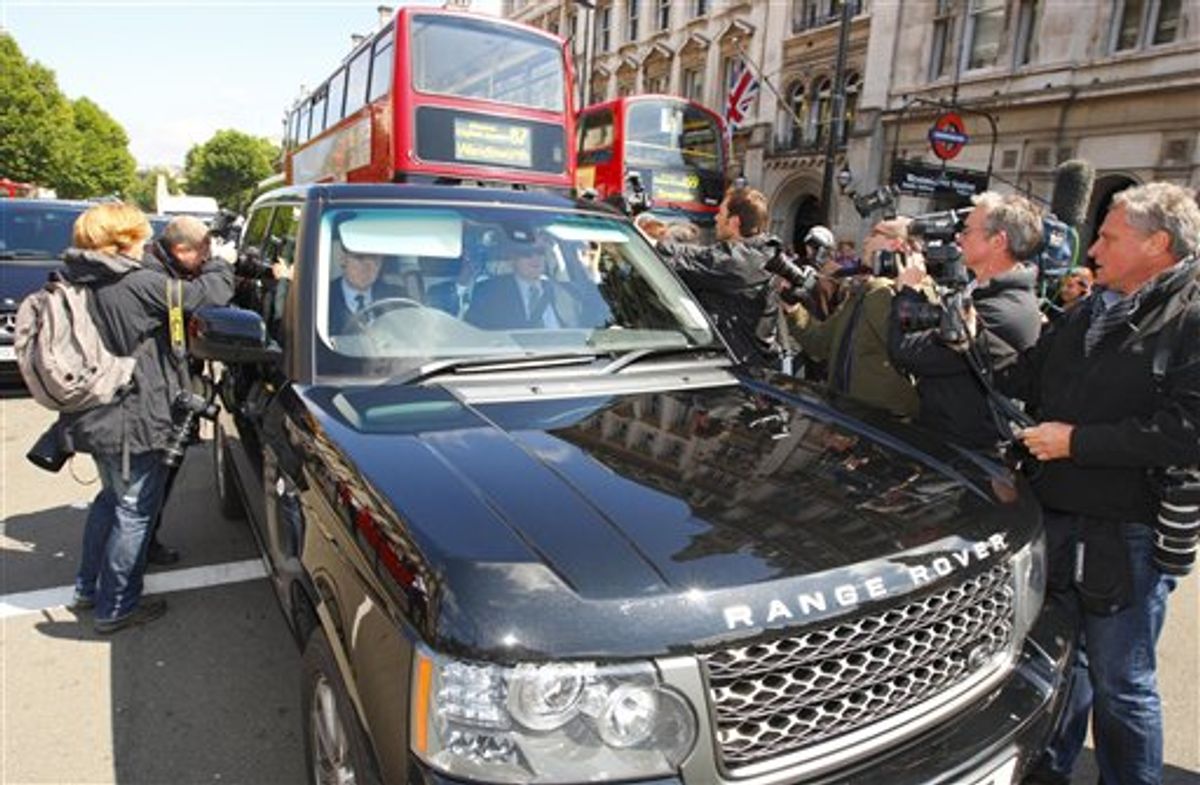 Photographers and cameramen surround the vehicle carrying Rupert Murdoch along Whitehall in London, Tuesday July 19, 2011, ahead of his and his son James' appearance before a House of Commons committee to face their intensely-awaited grilling on the News of the World phone-hacking scandal. (AP Photo/Chris Ison-pa) UNITED KINGDOM OUT: NO SALES: NO ARCHIVE: - PHOTOGRAPH CAN NOT BE STORED OR USED FOR MORE THAN 14 DAYS AFTER THE DAY OF TRANSMISSION (AP)
--

Rupert Murdoch's car was mobbed by photographers Tuesday as he arrived for a grilling from U.K. lawmakers about the phone hacking scandal that has swept from his media empire through the London police and even to the prime minister's office.

Murdoch, his son James and the media mogul's former U.K. newspaper chief, Rebekah Brooks, were all to be questioned at the hotly anticipated hearing. The elder Murdoch's Range Rover was surrounded as he arrived at the Houses of Parliament three hours early, and it quickly drove off. It wasn't immediately clear if he had come back and gone through another entrance.

Politicians will be seeking more details about the scale of criminality at Murdoch's News of the World tabloid, while the Murdochs will try to avoid incriminating themselves or doing more harm to their business without misleading Parliament, which is a crime.

Lawmakers are also holding a separate hearing to question London police about reports that officers took bribes from journalists to provide inside information for tabloid scoops and to ask why the force decided to shut down an earlier phone hacking probe after charging only two people.

Detectives reopened the case earlier this year and are looking at a potential 3,700 victims.

London's Metropolitan Police force said Tuesday it had asked watchdog to investigate its head of public affairs over the scandal -- the fifth senior police official being investigated. The Independent Police Complaints Commission will look at Dick Fedorcio's role in hiring a former News of the World executive as an adviser to the police.

Fedorcio also was to be questioned by lawmakers Tuesday, along with police chief Paul Stephenson and assistant commissioner John Yates, who both resigned over allegations of too-close ties to Murdoch journalists.

Stephenson began his testimony with a defense of his record, saying he resigned because the stories and allegations were becoming a distraction from his job.

He was asked about his relationship with Neil Wallis, a former executive editor who was arrested last week.

Stephenson said he had "no reason to connect Wallis with phone hacking" when he was hired for the part-time job in 2009.

He said now that the scale of phone hacking at the paper has emerged, it's "embarrassing" that Wallis worked for the police.

It was the appearance by the Murdochs and Brooks that was drawing huge public interest.

Members of the public and journalists lined up hours ahead of time in hope of a spot in the small committee room, which holds about 40 people. More will be able to watch in an overspill room, and Britain's TV news channels are anticipating high ratings for the appearance.

Prime Minister David Cameron cut short a visit to Africa and is expected to return to Britain for an emergency session Wednesday of Parliament on the scandal.

A former News of the World reporter, Sean Hoare, who helped blow the whistle on the scandal, was found dead Monday in his home. Police said the death was "unexplained" but is not being treated as suspicious. A post-mortem was being conducted Tuesday. Hoare was in his late forties.

Brooks' spokesman, David Wilson, said police had been handed a bag containing a laptop and papers that belong to her husband, former racehorse trainer Charlie Brooks. Wilson said the bag did not contain anything related to the phone hacking scandal and he expected police to return it soon.

The bag was found dumped in an underground parking lot near the couple's home on Monday, but it was unclear how exactly it got there. Wilson said Tuesday that a friend of Charlie Brooks had meant to drop the bag off, but he would say only he left it in the "wrong place."

Murdoch shut down the News of the World tabloid that Brooks once edited after it was accused of hacking into the voice mail of celebrities, politicians, other journalists and even murder victims. Still, the closure has done little to end a string of revelations about the murky ties between British politics and the country's tabloid media.

The scandal has prompted the resignation and subsequent arrest of Brooks and the resignation of Wall Street Journal publisher Les Hinton, sunk Murdoch's dream of taking full control of lucrative satellite broadcaster British Sky Broadcasting and raised questions about his ability to keep control of his global media empire.

Rupert Murdoch is eager to stop the crisis from spreading to the United States, where many of his most lucrative assets -- including the Fox TV network, 20th Century Fox film studio, The Wall Street Journal and the New York Post -- are based.

In New York, News Corp. appointed commercial lawyer Anthony Grabiner to run its Management and Standards Committee, which will deal with the scandal. But News Corp. board member Thomas Perkins told The Associated Press that the 80-year-old Murdoch has the full support of the company's board of directors, and it was not considering elevating Chief Operating Officer Chase Carey to replace Murdoch as CEO of News Corp.

News Corp.'s widely traded Class A shares fell 68 cents to $14.97 Monday -- down 17 percent since the scandal reignited on July 4.

Britain's Independent Police Complaints Commission also is looking into the phone hacking and police bribery claims, including one that Yates inappropriately helped get a job for the daughter of a former News of the World executive editor, Neil Wallis. Wallis, who was hired as a PR consultant to the police, has been arrested on suspicion of conspiring to intercept communications.

London police also confirmed that they once employed a second former News of the World employee besides Wallis. Alex Marunchak had been employed as a Ukrainian language interpreter with access to highly sensitive police information between 1980 and 2000, the Metropolitan Police said.

The police force said it recognized "that this may cause concern and that some professions may be incompatible with the role of an interpreter," adding that the matter will be looked into.

Meanwhile, Internet hackers took aim at Murdoch late Monday, defacing the sites of his other U.K. tabloid, The Sun, and shutting down website of The Times of London. Visitors to The Sun website were redirected to a page featuring a story saying Murdoch's dead body had been found in his garden.

Lulz Security, which has previously claimed hacks on major entertainment companies, FBI partner organizations and the CIA, hinted that more was yet to come, saying "This is only the beginning."

It later took credit for shutting down News International's corporate website. Another hacking collective known as Anonymous claimed the cyberattack on The Times' website.

Danica Kirka and Bob Barr contributed to this report.