The victimhood myths of Palin fans 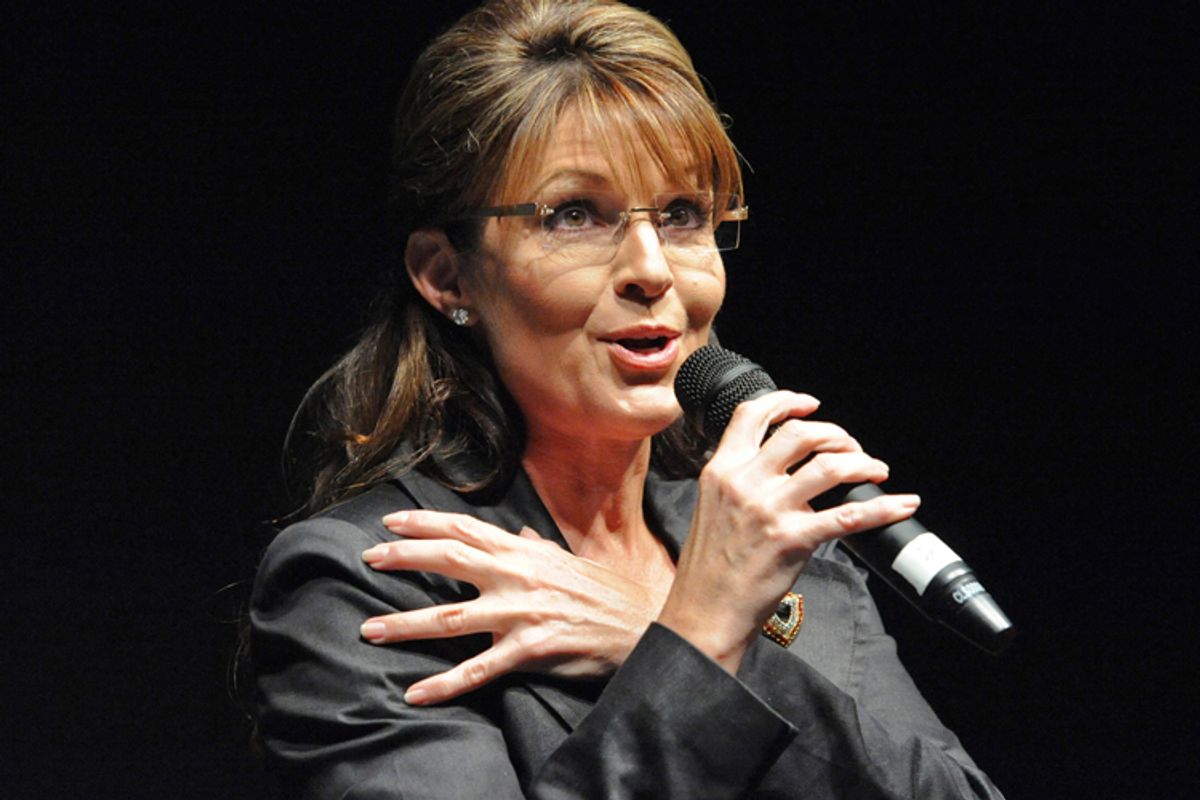 Journalism is a funny business. The "worthy" articles and essays that you spend days, weeks or even months laboring over sometimes are the ones that get the least attention. On the other hand, a throwaway blog post that might have taken you an hour or two to write goes viral, generating tens of thousands of hits and dozens of reprints all over the Web.

Such was the case for the Atlantic's Conor Friedersdorf, who typically writes about weighty issues connected with "politics and national affairs." He’s a good writer -- even if you’ve never heard of him. Until now.

What has put Friedersdorf on the map is one of those dashed-off blog posts I referred to in the first paragraph. A few days ago, Friedersdor went to see a midnight showing of "The Undefeated," a limited-release Sarah Palin propaganda film then playing in 10 theaters, including one in Orange County, Calif., where Friedersdorf happened to be visiting his parents. He wrote an article for the Atlantic's website about the experience, whose title -- "Sarah Palin Movie Debuts to Empty Theater in Orange County" -- sums up his thesis.

The tone of the piece might be described as snark lite. He ends his reportage, for instance, by asking the theater manager: "In hindsight, do you wish you’d had one more screen showing 'Harry Potter'?" But overall, the tone isn’t as scathing as you’d expect from a snickering "lamestream" egghead. Good writers let the facts speak for themselves. And the fact that no one in Orange County wanted to see "The Undefeated" tells us a lot about Sarah Palin’s dimming political fortunes now that Michele Bachmann has become the Tea Party’s alpha female.

After leaving the theater, Friedersdorf went home, posted his account of the evening, and went on with the business of his "real" work. He didn't realize at the time that the blog post would make him famous.

Within hours, it rocketed around the Web -- catnip for every Palin-hating liberal who loved to see this object of ridicule fall on her face. Never mind that the film sold out at a Texas screening, and did respectably in a few other venues (details that Friedersdorf himself has been careful to acknowledge). The Internet isn’t about listing information, it’s about twisting it.

Before I relate what happened next, it’s important to explain a very important fact: Sarah Palin isn’t like other politicians. I know this from personal experience, having watched her speak to a massive Tea Party event that I covered while researching my newly published book about conspiracy theories, "Among the Truthers." She is not so much listened to as worshiped. Her stock right-wing policy formulations and anti-Obama barbs are not really the source of her appeal. Rather, Palin is loved for the personal qualities she embodies: Her large family, her decision to give birth to a child she knew had Down syndrome, her son who served in Iraq, her small-town clapboard roots. There is a rapturous quality that comes over right-wing audiences when she speaks, as if they were in the presence of a Madonna figure come to deliver America from its travails.

In practice, Palin’s political policies were fairly conventional: In 2007, the year before she launched her national political career, the then-governor signed a record-breaking $6.6 billion operating budget into Alaska law. Federal expenditures account for one in three jobs in Alaska. In 2008, in fact, her state was the largest per-capita recipient of federal earmarks in the nation. But in the dream world of Palin’s hardcore fan base -- and perhaps even her own mind -- none of this matters. Instead, Palin partisans focus on her constructed identity: a patriotic, God-fearing small-town girl who grew up in a Norman Rockwell Ameritopia of state fairs, basketball tournaments, beauty pageants and wooden churches. To announce one’s support for Palin is to declare one’s belief that this vision of America somehow can be recaptured, that the country’s social contract can magically be turned back to the era of sock hops and drive-in restaurants, if only Americans elect the right people. To put down Palin, on the other hand, means that you hate America.

This phenomenon was reinforced for me in 2009, when I criticized her decision to resign as governor of Alaska. Many of the right-wing critics who supplied comments on my newspaper's website plainly had decided that Palin was a sort of political Christ figure, who has been martyred for America’s political sins.

"It’s because of incessant criticism from people like you why she is quitting," one wrote. "Attack her, attack her children, attack her grandchildren. No individual should have been treated by the press as this woman has. Shameful, even after the election was over, there was no let up. You and your ilk were out to destroy this woman -- congratulations … Your ilk despises her because she refused to abort her Downs Syndrome child."

Another wrote that such "haters" as me "hate Christians. They hate the average person, who is not an elitist snob, or is not an copy of their leftist agenda. They hate the fact [that Palin] is a well spoken … They make up lies, just to avoid the truth. The lies and misinformation they spread is pure HATE, the Hollywood elite is going after her because they fear her, she is capable to put these liars in their place."

All of which brings me back to Friedersdorf. The idea that Palin is an anointed figure who bears her suffering to redeem America’s sins helps explain the bizarre reaction to his blog post. In the imagination of Palin-worshippers, the idea that her Orange County church could be empty, even at midnight, simply does not compute. It can only be explained as being some lie hatched by those elitist, Hollywood "haters."

And so began the conspiracy theories.

As Friedersdorf reports on the Atlantic site today, the first hint of out-and-out paranoia began with one William Collier, a pro-Palin blogger and movie marketer. He announced to the blogosphere that the midnight showing of "The Undefeated" in Orange County was unscheduled -- meaning that Friedersdorf might have arranged a "secret showing" that would supply him fodder for anti-Palin ridicule.

You can’t argue with conspiracy theorists. But Friedersdorf tried. He wrote Collier a note, as follows:

Bill, I am going to presume that you’ve made an innocent mistake, but I expect you to correct it. Attached is an image from the Los Angeles Times dated Thursday, July 14, 2011. The movie was advertised there, just as you’d expect, and contrary to the assertion in your post that ‘there has never been any mention of or advertising for any midnight showing.’ The movie was also advertised on Google, where I found it.

Collier's response was that the Times listing merely demonstrated "how elaborate such a setup could be." As students of conspiracism will immediately note, this is the same logic that drives "birther" conspiracy theorists to insist that the Barack Obama birth announcements placed in Honolulu newspapers 50 years ago must also have been part of an equally "elaborate" setup.

In another age, this is where the story might end. But Collier's nonsense was picked up by an obscene right-wing thug named Andrew Breitbart, who twittered the conspiracy theory to his legions of followers. And so now, the Web is rife with blog headlines such as "Palin Movie Hoax: How Atlantic reporter used unadvertised midnight show to create 'empty theater' debut headlines." Anyone who spends 30 seconds researching the story will find out that it’s nonsense. But that’s 28 seconds more than most Internet users have to spare.

Conspiracy theories act as a bridge between ideology and reality -- in this case, between the right-wing utopia in which Sarah Palin rescues the United States from liberalism by the force of her own pro-life Ivory Girl goodness; and the reality of empty theaters and fading hopes. But more broadly than this, the whole episode demonstrates what happens when the ancient human instinct for heroes and saviors gets mixed up with the very modern Internet rumor machine: For the shrillest partisans, paranoia will always play to a packed house.

Jonathan Kay is managing editor for comment at Canada's National Post newspaper. His new book, "Among the Truthers: A Journey Through America's Growing Conspiracist Underground," was published by HarperCollins in May. Visit his blog at www.amongthetruthers.com.

Jonathan Kay is Editorials Editor for the National Post, a Toronto-based Canadian newspaper. He is also Senior Editor of MyVideoGames.com.