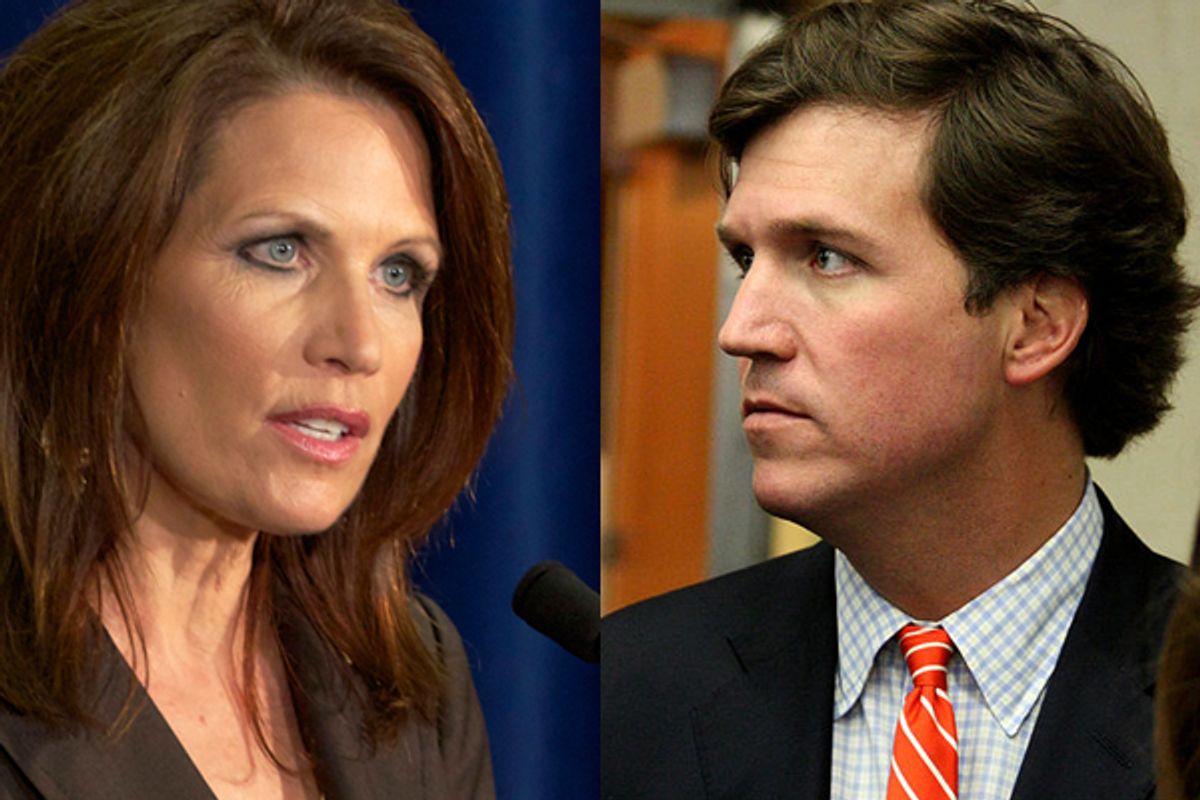 Is the Daily Caller's Michele Bachmann piece the quintessential Daily Caller story? It's by Jonathan Strong, the sexed-up headline isn't supported by the text, and Tucker Carlson's already defensive about it.

The headline is, "Stress-related condition 'incapacitates' Bachmann; heavy pill use alleged." Again, the "condition" is generally called "migraines." And "heavy pill use" certainly sounds like an allegation of a prescription painkiller addiction, though the article does not once name any of the specific medications Bachmann supposedly takes.

The Minnesota Republican frequently suffers from stress-induced medical episodes that she has characterized as severe headaches. These episodes, say witnesses, occur once a week on average and can “incapacitate” her for days at time. On at least three occasions, Bachmann has landed in the hospital as a result.

"She has terrible migraine headaches. And they put her out of commission for a day or more at a time. They come out of nowhere, and they’re unpredictable," says an adviser to Bachmann who was involved in her 2010 congressional campaign. "They level her. They put her down. It’s actually sad. It’s very painful."

Bachmann has been hospitalized three times in the last ... some unknown number of years. (And one of those trips to the hospital was reported to be an appendicitis attack, apparently?) But she gets bad headaches every week! And some people (one unnamed former aide, and "sources") say that disqualifies her to be president.

Of particular concern to some around her is the significant amount of medication Bachmann takes to address her condition.

The former aide says Bachmann’s congressional staff is "constantly" in contact with her doctors to tweak the types and amounts of medicine she is taking. Marcus Bachmann helps her manage the episodes

OK, so, what do chronic migraine sufferers usually take? Are they all just popping Vicodins like Dr. House? If you're going to accuse someone of relying too much on "pills," shouldn't you work to identify the pills, or at least make an educated guess as to what the pills might be? Typical migraine treatments include triptans, which have few side effects. Preventive treatment often means beta blockers or antidepressants. Or sometimes Botox. (Oh no, our president might not be able to frown!)

If Bachmann's got some sort of untrustworthy 1970s-style doctor giving her narcotics to treat her migraines, that's a pretty big deal. But if we're just talking about standard treatment for chronic migraines, I am much less concerned about these "pills" she is taking all the time.

John F. Kennedy had Addison's and hypothyroidism. FDR had polio. Ronald Reagan was senile. All of those conditions were newsworthy and affected job performance, but there's a way to report on a politician's chronic medical condition that's informative and not just a transparent attempt to sink a candidacy.

The Caller actually had a very nice little story here -- I didn't know about Bachmann's migraines! -- but its habitual sensationalism means we don't know the extent of her problem.

Here's the Columbia Journalism Review on your usual Caller "scoop":

But when The Daily Caller has reached for the big scoop, the results have been less impressive. Headline-grabbing exclusives—mostly intercepted e-mails and tweets and attacks on media rivals—have exploded across the web before fizzling under scrutiny. Sexed-up headlines burned above stories too twisted or bland to support them. Quotes were ripped out of context, corrections buried, and important disclosures dismissed.

Does that seem at all familiar?

Tucker says "we did not suggest" that the headaches make Bachmann unfit for office. They just quoted multiple sources making that claim in a story that says she is constantly "incapacitated" by her "stress-related condition."

Michele Bachmann is unfit to be president because she's a demented religious nutcase and a far-right extremist. But she seems to have managed her migraines well enough to make it this far.