Face-to-face meeting followed on heels of U.S. recognition of Libyan rebels, according to AP sources 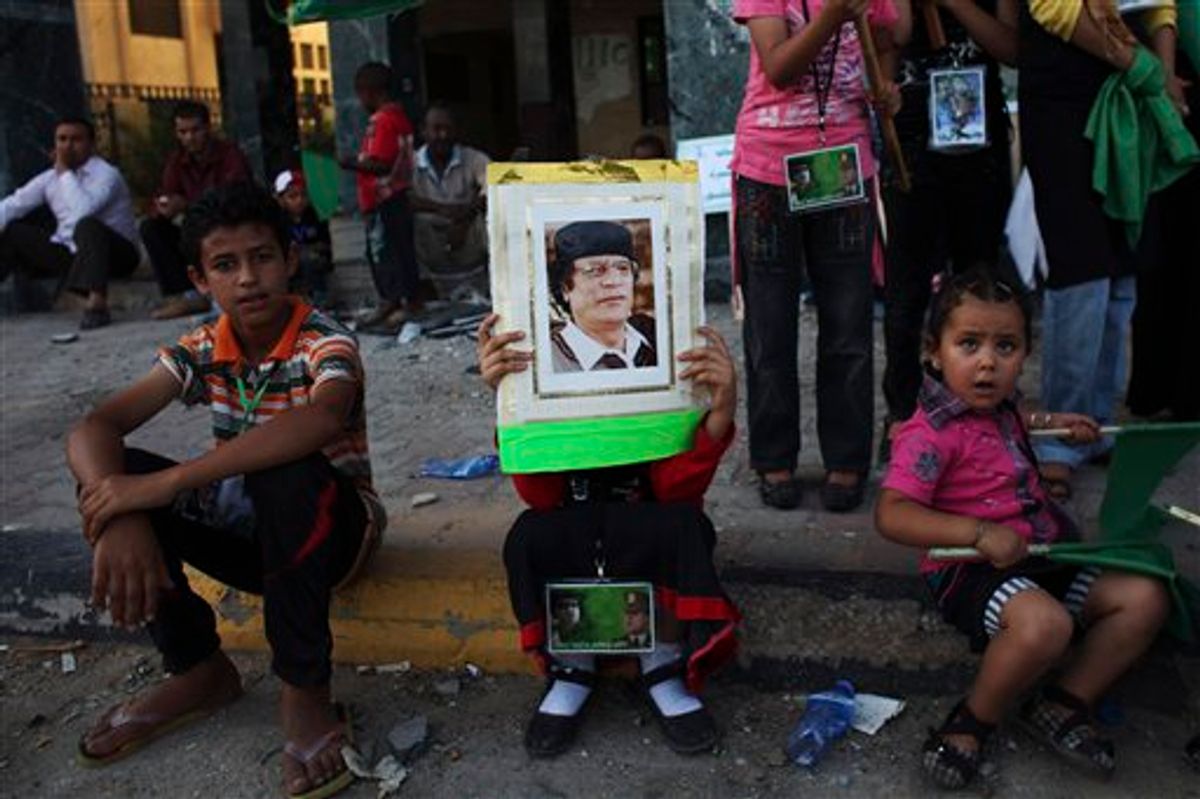 In this photo taken on a government-organized tour, a child rests as she holds up a picture of LIbyan leader Moammar Gadhafi during a rally in the town of Zawiya, roughly 50 km (30 miles) west of Tripoli, Libya, Saturday, July 16, 2011. Ten rebel fighters were killed in an advance on the strategic oil town of Brega in eastern Libya on Saturday, with rebel forces sweeping the outskirts for land mines so they could move in, officials said. The advance came after Libya's main opposition group was recognized by more than 30 nations, including the U.S., as Libya's legitimate government. Friday's decision potentially frees up billions of dollars in cash that the rebels urgently need. (AP Photo/Tara Todras-Whitehill) (AP)
--

The meeting was not a negotiating session and there were no plans to meet with the Gadhafi regime again, the officials said. The meeting followed a decision Friday by the U.S. and several other nations to formally recognize Libya's main opposition group as the country's legitimate government, a major boost for the rebel movement.

A senior U.S. official traveling with Secretary of State Hillary Rodham Clinton in India said the U.S. agreed to meet the Libyans only after the U.S. officially recognized the rebels. The meeting followed what the official described as several phone calls from Libyan officials that the U.S. interpreted as a misguided attempt to repair relations.

The official said the meeting took place Saturday in an unnamed third country and brought together three senior U.S. diplomats, including Jeffrey D. Feltman, the top State Department official in charge of Middle East policy, along with four members of Gadhafi's inner circle. A Gadhafi spokesman said the meeting happened in Tunisia.

Both U.S. officials who detailed the meeting said the Obama administration's purpose for the session was to deliver a clear and firm message that the only way forward in Libya is for Gadhafi to step down. The U.S. officials requested anonymity because they were not authorized to discuss the meeting publicly.

Gadhafi's regime said the talks were focused on repairing ties between the nations. That account was denied by the U.S.

Under the cover of a U.N. mandate, the U.S. took the lead in the airstrikes against Libyan forces that began in March to protect Libyan civilians from Gadhafi's advancing forces. NATO has since taken the lead in the bombing campaign, with the U.S. playing a support role.

Though President Barack Obama has pledged that the Libya campaign will not turn into a protracted war, he has said the U.S. will continue its involvement until Gadhafi stops attacking his people.