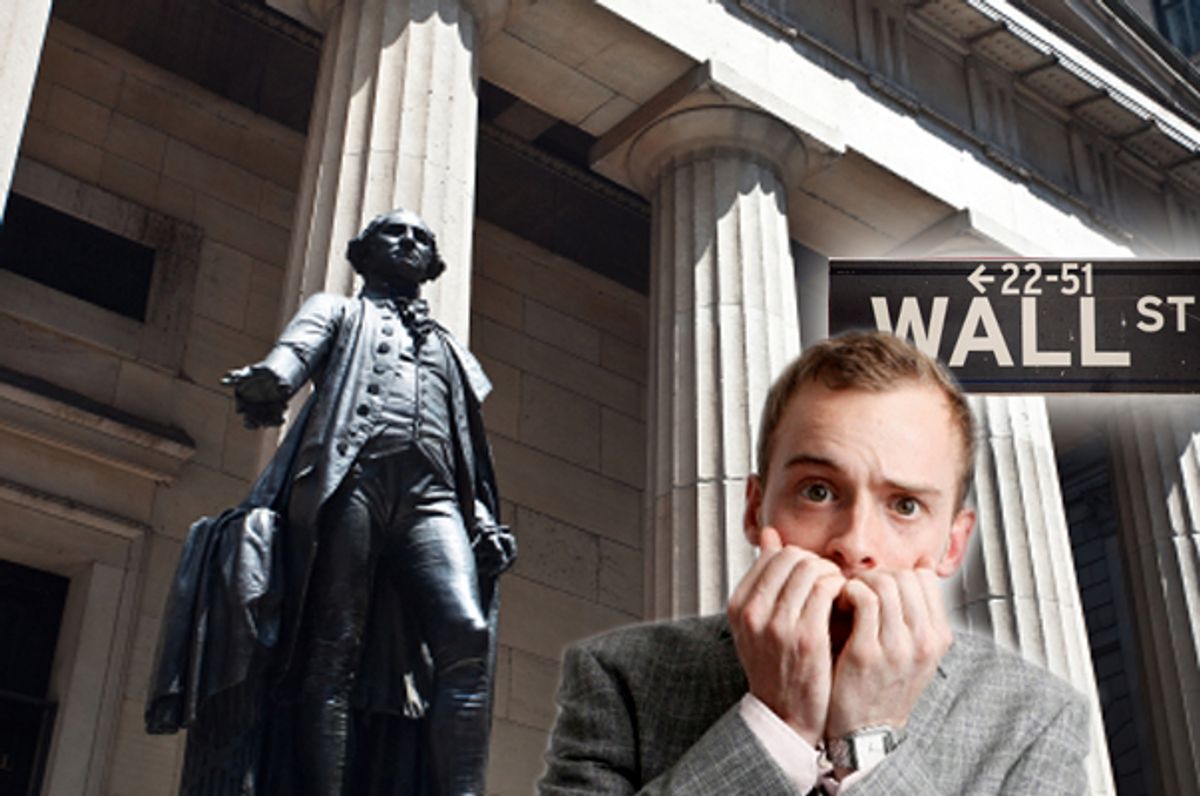 "Debt Worries Roil Markets" declares the Wall Street Journal. It's the kind of headline sure to set off post-traumatic stress disorder panic attacks for survivors of 2008's credit crunch. Only two weeks remain before the Aug. 2 debt ceiling deadline, and while the rest of the world wonders how bad things have to get before the U.S. government acts responsibly, the House of Representatives is preparing to vote on an outrageously extreme "Cut Cap and Balance" proposal that has no chance of passing the Senate or escaping a White House veto.

Europe's sovereign debt woes are worsening by the day, while the "full faith and credit" of the United States is being threatened by Republican politicians who have managed the amazing trick of simultaneously believing that a) nothing really bad will happen if the debt ceiling isn't raised and b) the threat of not raising the debt ceiling is so extreme that the White House will have no choice but to accede to their ransom demands.

No wonder Wall Street is beginning to freak out.

Adding to the market woes were indications that, after months of shrugging off the debate over the U.S. debt ceiling, investors are getting edgy over Washington inaction ahead of an Aug. 2 deadline.... financial markets are showing classic signs of contagion: Investors, worried about troubles in one place, sell in another, creating a downward spiral that feeds on itself.

At Bloomberg, William Cohan captures the tension in another flashback-inducing snapshot:

Indeed, investors' manic desire for safety last week reached levels not seen since the most acute days of the financial crisis in September and October 2008. Ironically, though, given the pathetic display in Washington and the country's ongoing fiscal troubles, people turned in droves to the perceived security of the U.S. Treasury market, even though it has never looked shakier.

That's worth repeating. Investors, terrified of European instability, are pouring their cash into U.S. Treasuries, even as the U.S. government is doing all it can to undermine the integrity of its own finances.

Yet another example of dysfunction arrives courtesy of the credit-rating agencies. Both Moody's and Standard & Poor's have announced that they are ready to downgrade the credit of the United States -- a step that would have enormous consequences for the global bond market and government finances from the municipal to the national level. But the two agencies seem to be operating on different playing fields. On Monday, Moody's suggested that maybe the U.S. would be better off without a debt ceiling in the first place. (That's actually not quite as radical as it sounds. From 1979-1995, the U.S. operated under the so-called Gephardt rule which declared that any time Congress passed budget legislation that increased the debt, the debt limit was "deemed" raised as well.)

Nikola Swann, the sovereign ratings director at Standard & Poor's, warned that a downgrade of the U.S. credit rating could come before we reach the Aug. 2 default deadline....

"We need to see bipartisan agreement on fiscal consolidation plan that would be multi-year and large enough to stabilize the net government debt to GDP ratio. We believe that would have to be in the order of $4 trillion. A plan that is agreed to by both parties; making the proposition that it could survive a change of administration credible."

If you are annoyed by the spectacle of an executive at one of the credit rating agencies that performed so miserably during the financial meltdown dictating terms to the U.S. government that would gut our social welfare safety net, well, you're not alone. But perhaps the more worrisome aspect to this is how all over the place Wall Street is right now. Moody's advocates getting rid of the debt ceiling. Standard & Poor's wants a $4 trillion "fiscal consolidation deal" -- right now. Investor funds are pouring into short-term U.S. securities but not into 30-year bonds, hinting that rising panic is driving cash toward the perceived safety of U.S. Treasuries, but is increasingly gun-shy about any long-term commitment.

It's a big mess, and it's going to get worse by the day from here on out, until there's some credible sign that the House will vote for a debt ceiling deal that the Senate and White House will accept. But there's no indication that House Republicans will agree to anything of the sort -- a fact that will only make Wall Street, and anyone else worried about the economic future, even more nervous.

Stock up on your antidepressants, folks, the seas are getting choppy.