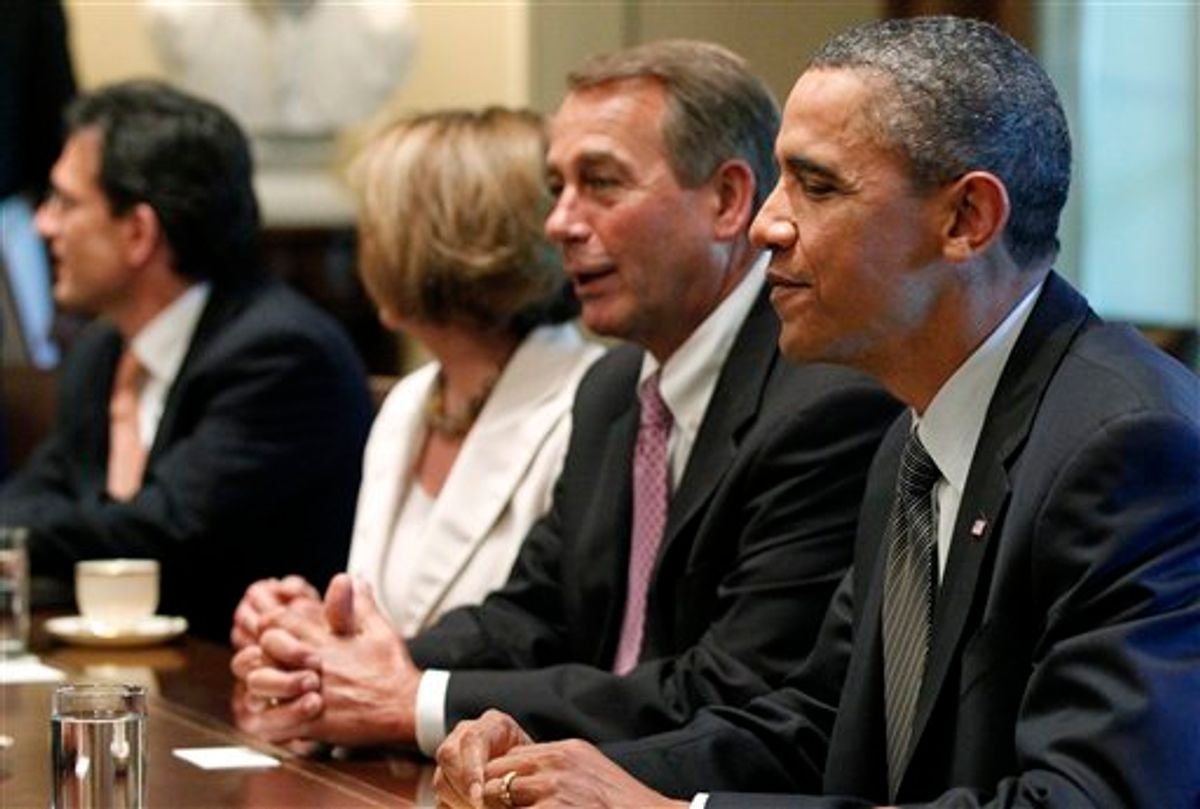 In this July 14, 2011, file photo, President Barack Obama sits with House Speaker John Boehner of Ohio, House Minority Leader Nancy Pelosi of California, House Majority Leader Eric Cantor of Virginia, as he meets with Republican and Democratic leaders regarding the debt ceiling in the Cabinet Room of the White House in Washington, Thursday, July 14, 2011. Obama's decision to haul lawmakers in day by day to negotiate a debt deal comes down to reality: He has no other choice. The president has essentially cleared his agenda to deal with one enormous crisis. (AP Photo/Charles Dharapak) (AP)
--

Most Americans want to see a compromise on the debt ceiling, according to a new NBC/Wall Street Journal poll.

62 percent of self-identified Democrats said they would want Democratic leaders in the House and Senate to make compromises to gain consensus on the current budget debate, while only 43 percent of Republicans want to see their party leaders concede some of their positions. However, around 70 percent of independent respondents said they wanted to see both parties compromise.

The poll results, released Tuesday show that 55 percent of respondents think that failing to raise the debt ceiling would be "a real and serious problem," while only 18 percent said it would not be. This contrasts starkly to results gleaned from a Gallup survey in May, in which 47 percent of people said they would want Congress to vote against raising the debt ceiling.

Meanwhile, support for President Obama's proposal for lowering the deficit significantly trumps that for Republican proposals: 58 percent of NBC/WSJ poll respondents said they preferred Obama’s suggestions to lower the federal deficit by $4 trillion over 10 years by cutting federal spending, raising tax revenue from the wealthy and reducing some Medicare spending. Contrastingly, only just over a third prefer the House Republican proposal to reduce the deficit by $2.5 trillion over 10 years through cutting spending alone and not raising additional revenues.