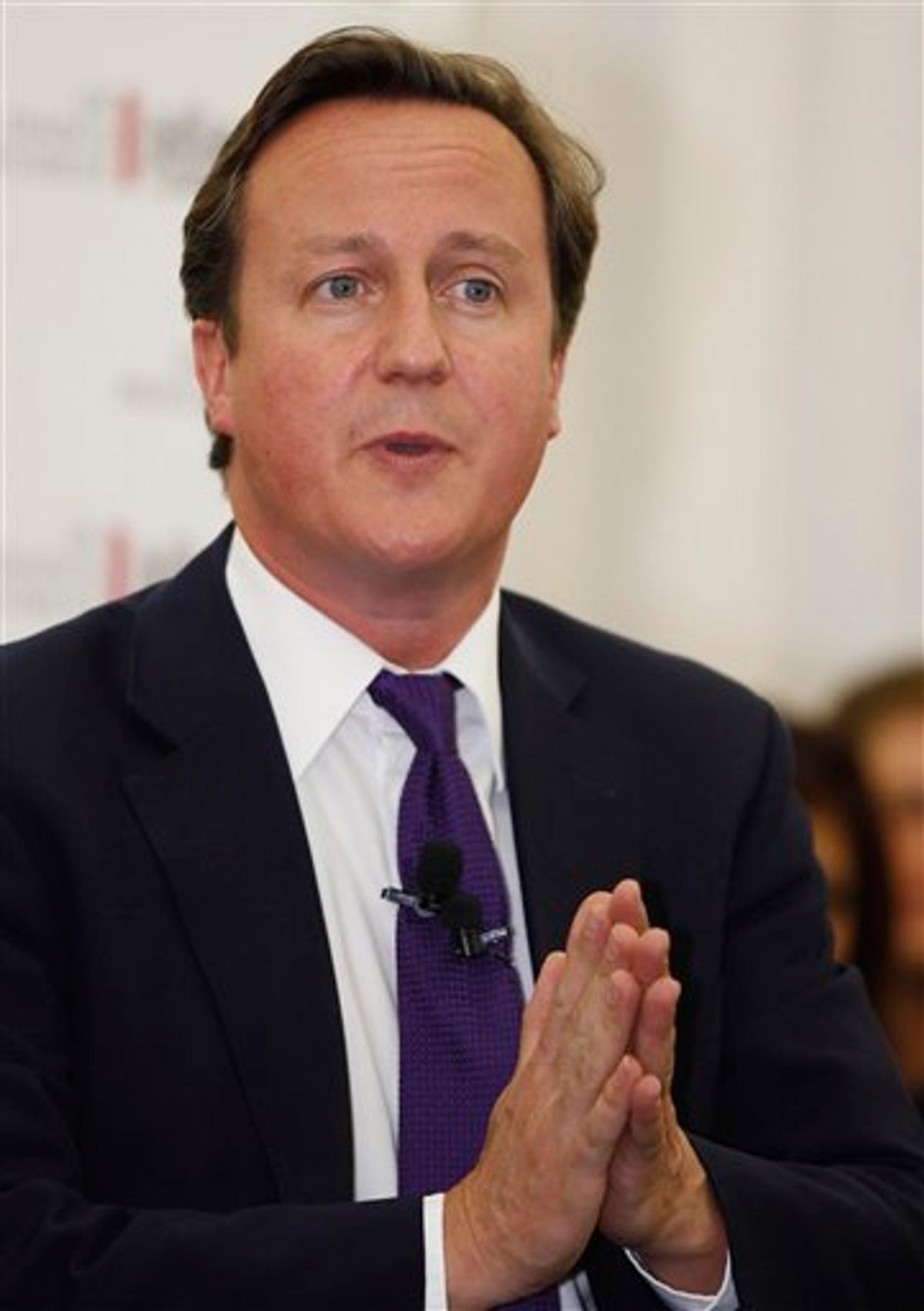 Prime Minister David Cameron emphatically denied claims that his staff tried to stop an inquiry into a phone hacking and police bribery at the News of the World and defended his decision to hire one of the tabloid's editors as his communications chief.

In a raucous emergency session Wednesday in Parliament, Cameron admitted, however, that both the ruling Conservatives and the opposition Labour parties had failed to pursue key developments in the hacking case over the years.

"The greatest responsibility I have is to clear up this mess," Cameron told lawmakers, promising that a government inquiry would investigate whether other media organizations besides News of the World also committed illegal acts over the years.

Cameron cut short his Africa trip to appear before the House of Commons, which delayed its summer break to debate issues engulfing Britain's political and media elite and Rupert Murdoch's global communications empire, News Corp., which owned the troubled News of the World.

Cameron's former communications chief Andy Coulson -- a former editor at the tabloid -- is among 10 people who have been arrested in the scandal. One person has been cleared by police.

Lawmakers want to know why Cameron insisted on hiring Coulson despite warnings and how much the prime minister knew about the phone hacking investigation. Some have alleged that some of Cameron's staff may have met with police in an attempt to pressure them to drop the investigation.

"To risk any perception that No 10 (Downing Street) was seeking to influence a sensitive police investigation in any way would have been completely wrong," he said.

Cameron did, however, meet with News Corp. executives more than two dozen times from May 2010 to this month -- meetings that were criticized in Parliament by Labour Party leader Ed Miliband, who said Cameron made a "catastrophic error of judgment" in hiring Coulson.

Cameron defended Coulson's work in government and said if it emerged that Coulson had lied to him about his role in the hacking case he would take it seriously.

Britain's Conservative Party said Tuesday it had learned that another recently arrested phone-hacking suspect, former News of the World executive editor Neil Wallis, may have advised Coulson before the 2010 national election that put Cameron into power. It said Wallis was not paid for the advice, however.

Cameron also said the hacking affair raises questions over the ethics and values of London's police force. He told lawmakers Wednesday that he would look at ways to bring in new leadership to Britain's police force and named six people who will assistant Lord Justice Brian Leveson's inquiry into the culture, practices, and ethics of the press.

The scandal has captivated audiences from America to Murdoch's native Australia, and there's more to come; only a fraction of some 3,870 people whose names and telephone numbers were found in News of the World files have been contacted by police so far. It remains unknown how many of those names were targeted for hacking.

On Wednesday, a judge awarded "Notting Hill" actor Hugh Grant -- one of the most prominent celebrity critics of the Murdoch empire -- the right to see whether he was one of them.

Meanwhile, a House of Commons committee on Wednesday blasted both News International, the News Corp. unit which operates the British papers, and London Metropolitan Police for their performance on the scandal.

"We deplore the response of News International to the original investigation into hacking. It is almost impossible to escape the conclusion ... that they were deliberately trying to thwart a criminal investigation," said the Home Affairs committee, which has been grilling past and present Metropolitan Police officials about their decision not to reopen the hacking investigation in 2009.

However, the panel said it was astounded that police would blame the newspaper's tactics for their failure to mount a robust investigation.

"The difficulties were offered to us as justifying a failure to investigate further and we saw nothing that suggested there was a real will to tackle and overcome those obstacles," the committee said.

The committee said it was "appalled" by testimony on Tuesday from Dick Fedorcio, director of public affairs for the Metropolitan Police press office, about a short-term contract given to Wallis to advise the department on press and publicity. Fedorcio testified that he couldn't remember who recommended Wallis and "attempt to deflect all blame" to Assistant Commissioner John Yates, who has resigned as head of the anti-terrorist command.

The revelation of the Wallis contract led to the resignation on Sunday of the police chief, Paul Stephenson.

Buckingham Palace reacted sharply to a claim by legislator Chris Bryant that the palace had raised concerns with Cameron's office over his decision to hire Coulson.

"It is outrageous to suggest this," said a palace spokesman, speaking on condition of anonymity in line with royal practice.

Though apologetic during a three-hour appearance on Tuesday, Murdoch insisted he was at fault only for trusting the wrong people at the News of the World, which he described as a tiny portion of his vast media empire.

Murdoch said he had known nothing of allegations that staff at his News of the World tabloid hacked into cell phones and bribed police to get information on celebrities, politicians and crime victims, and that he never would have approved such "horrible invasions" of privacy.

Despite lawmakers' suggestions that his organization encouraged such behavior, Murdoch was unflappable -- even after a protester rushed to throw a foam pie at him during the hearing.

On Wednesday, police said they had charged Jonathan May-Bowles, 26, with behavior causing harassment, alarm or distress in a public place.

As the scandal exploded this month, Murdoch shut down the 168-year-old News of the World, gave up on buying full control of British Sky Broadcasting, Britain's biggest commercial television company, and accepted the resignations of two top executives.