The U.N. charged Goran Hadzic with crimes against humanity for activities during Balkan wars 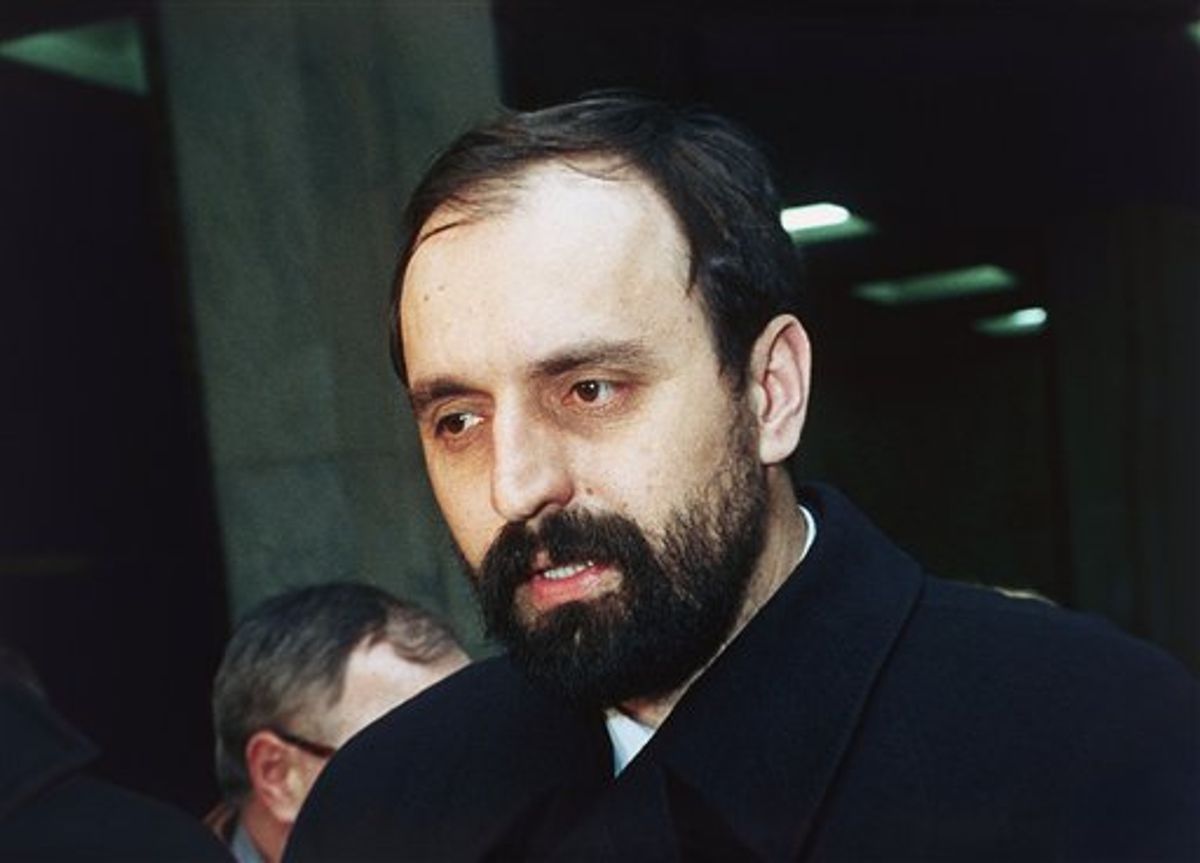 FILE - In this Feb. 6, 1993 file photo, Goran Hadzic, who heads representatives of the Krajina Serbs, talks with reporters at the United Nations in New York, United States. It has been reported on Wednesday, July 20, 2011 by Serbian TV station B92 that authorities have arrested Goran Hadzic, the last remaining fugitive sought by the U.N. war crimes court. Hadzic has been on the run for eight years. He is wanted for atrocities stemming from the 1991-1995 war in Croatia. (AP Photo/Bebeto Matthews, File) (AP)
--

The last fugitive sought by the U.N. Balkan war crimes tribunal was arrested by Serbian authorities Wednesday, answering intense international demands for his capture and boosting the country's hopes of becoming a candidate for European Union membership.

Former Croatian Serb leader Goran Hadzic was taken into custody as he met a man delivering him money in a forest in a mountainous region of northern Serbia where many of his relatives live, authorities said. He had dramatically changed his appearance and was armed but did not resist, they said.

Hours later, Hadzic was brought in for questioning at the war crimes court in the capital Belgrade, a key step toward his extradition to the tribunal in The Hague, Netherlands. His lawyer said Hadzic will not appeal the process, paving the way for a quick extradition, possibly within the next few days.

An unknown figure before the 1991-1995 ethnic war for control of Croatia, Hadzic suddenly rose to prominence through his links to Serbian leader Slobodan Milosevic's secret police. Put in charge of the self-styled Serb ministate in eastern Croatia, he was seen as a pawn of criminal gangs that collaborated heavily with the secret police and made huge profits from smuggled cars, gasoline and cigarettes.

The Hague tribunal indicted him in 2004 on charges of war crimes and crimes against humanity including the murder, torture, deportation and forcible transfer of Croats and other non-Serbs from the territories he controlled.

Less than two months after the capture of Bosnian Serb Gen. Ratko Mladic, Serbia's Western-leaning president announced live on national television that "Serbia has concluded its most difficult chapter in the cooperation with the Hague Tribunal."

In his indictment Hadzic is accused of responsibility for the 1991 leveling of Vukovar, said to be the first European city entirely destroyed since World War II.

In one of the worst massacres in the Croatian conflict, Serb forces seized at least 264 non-Serbs from Vukovar Hospital after a three-month siege of the city, took them to a nearby pig farm, tortured, shot and buried them in an unmarked mass grave.

A month before about 20 kilometers (12.43 miles) southwest of Vukovar, about 50 Croats who had been detained for forced labor were made to walk through a minefield to render it safe for the Serbs, according to the indictment.

"Upon reaching the minefield, the detainees were forced to enter the minefield and sweep their feet in front of them to clear the field of mines," it said.

Hadzic worked with paramilitary forces that became notorious for their brutality, including the "Tigers," led by Zeljko Raznatovic, known as Arkan. In that same month of October 1991, Arkan's men captured 28 civilians from a police facility in Dalj, tortured them and threw their bodies in the Danube. Arkan was assassinated in a Belgrade hotel in 2000.

EU leaders immediately welcomed the arrest and saluted "the determination and commitment" of Tadic's government.

A tribunal statement said Hadzic will be transferred to The Hague as soon as judicial procedures are completed in Serbia. That normally takes several days.

He will then be brought before a judge to hear a reading of the 14 charges against him. He may enter a plea or delay for a month.

Tribunal president O-Gon Kwon said the arrest was a milestone in the history of the court, which has indicted 161 leaders from the former Yugoslavia since it was created in 1993 at the height of the fighting.

The tribunal has been under U.N. pressure to wind up its cases and close its doors.

Serbian security police found out that Hadzic was meeting a money courier and arrested him Wednesday morning outside the village of Krusedol, Serbian war crimes prosecutor Vladimir Vukcevic told reports.

Until this week, Tadic said, Serbian officials did not know where Goran Hadzic was, despite suspicions that he had been sheltered by former allies.

In the past, Hadzic had narrowly escaped arrest, apparently due to tips from within the Serbian security authorities. Serbia's post-war authorities have for years faced accusations that they are not doing enough to hunt down the war crimes suspects.

Serbia, widely viewed as the main culprit for the wars in the Balkans, has been working to reintegrate into the international community following years of sanctions and pariah status in the 1990s.

Milosevic was extradited to the Hague tribunal in 2001 and died there in 2006, while on trial for genocide.

Along with Mladic, Serbia has also arrested war crimes fugitives Radovan Karadzic. Both are currently facing war crimes charges in the Hague.