The neutering of John Boehner 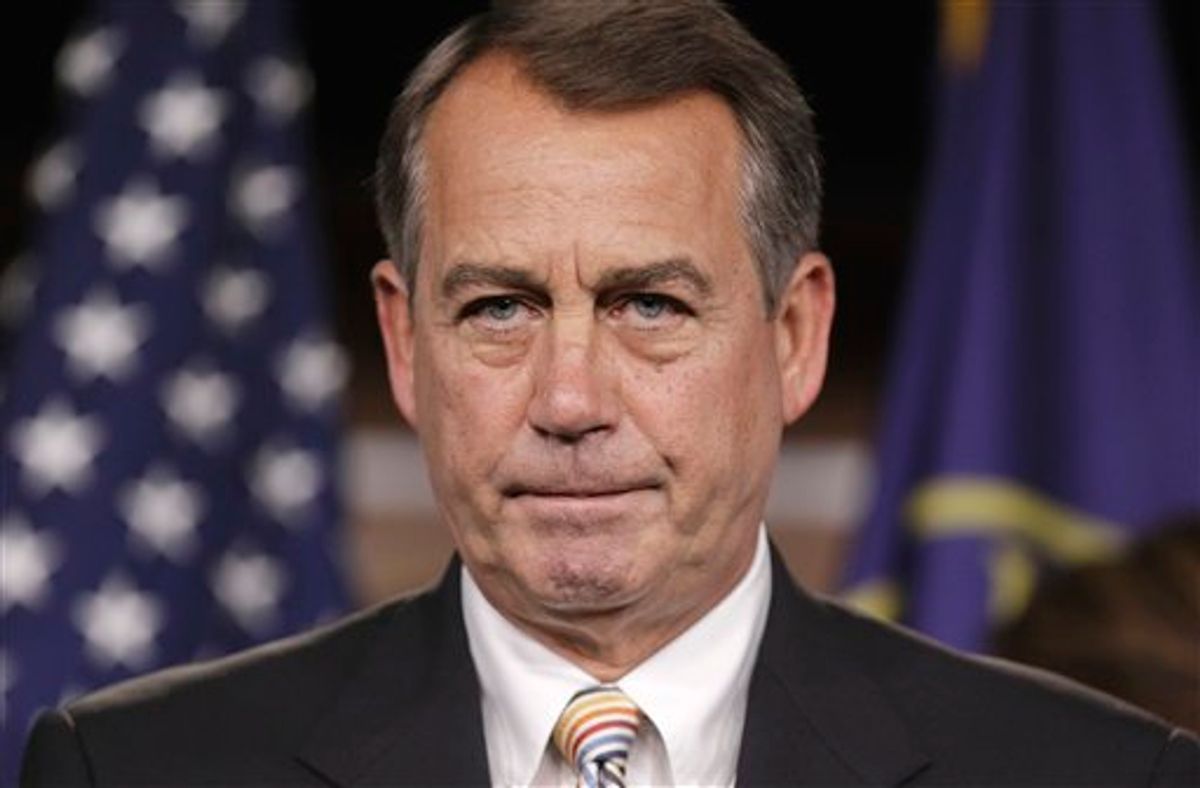 House Speaker John Boehner of Ohio pauses during a news conference on Capitol Hill in Washington, Tuesday, July 19, 2011. Boehner said he is considering alternative budget plans even as the House takes up a GOP proposal to cap spending and eventually require a balanced budget. (AP Photo/J. Scott Applewhite) (AP)
--

Poor John Boehner. He has reached the pinnacle of his career. Speaker of the House. Remember the cheers from the Republicans that greeted his election? Remember the tears in his eyes? It doesn't get better than that.

But where are the cheers now? All Boehner wants to do is make a difference, to make a huge dent in the deficit, to begin to fulfill the promises on which his party came to power. And just look how his followers have responded. Is there exultation because he has garnered concessions on spending from a Democratic president that no one thought possible? Is there renewed adulation? Praise as the leader the Republicans have always craved?

He is a leader without followers. His supposedly loyal lieutenant, Majority Leader Eric Cantor, has played the role of Brutus. No compromises with the dreaded Democrats. Who cares if this is the best deal anyone can imagine? We don’t compromise. We don’t make deals.

While the drama of the negotiations over raising the debt ceiling is compelling, the deeper story about the fate of Boehner, the future of legislative leadership, and even the political future of the Republican Party might be more important in the long run.

Students of the Congress have long argued that the speaker of the House is a leader with power, while the majority leader in the Senate must cajole his co-partisans in order to accomplish anything. The rule of thumb for young Democrats in the mid-20th century, when Sam Rayburn of Texas was speaker, was that to get ahead in the House, you had to get along with Mr. Sam. Speaker Rayburn knew what members wanted -- and he had the power to reward them or to deny them, depending on whether they did his bidding or not.

His Senate counterpart was Lyndon Johnson; and, as Robert Caro has so skillfully shown us, Johnson succeeded by persuasion, not formal powers. The Johnson Treatment, all 6 feet and 4 inches of Johnson draped over shorter colleagues, whispering in their ears, knowing their secrets and cajoling their cooperation, was a leadership style marked by personal favors and implied threats.

When George Mitchell, after leaving the Senate as majority leader, was considered for the job of commissioner of Major League Baseball, he reportedly was asked, "How will you manage to deal with 30 multimillionaires, each with their own agenda and independent power?" Mitchell replied, "That will be easy. I had twice that many in the Democratic caucus in the Senate!" He too ruled by persuasion. Speaker Tip O’Neill could negotiate with President Reagan and deliver his votes, because he retained power over the members of his caucus.

Boehner has none of that. In fact, he has less power and loyalty than Nancy Pelosi had during her brief years as speaker. The contrast is important.

The Democrats regained majority status, and Pelosi became speaker for the 110th and 111th Congresses, because she and her lieutenants -- particularly Steny Hoyer of Maryland and Rahm Emanuel of Illinois -- recruited moderate to conservative Democrats to run in seats held by Republicans, seats that the leaders thought were winnable. The leaders then supported these candidates' campaigns, financially and often personally, and earned the loyalty of those who would become Blue Dog Democrats. Pelosi was skilled as speaker in knowing when she could call on the Blue Dogs to support her and when she could let them vote the interest of their districts -- and often their own interests -- against those of the majority of her caucus.

In contrast, few of the 86 freshmen Republicans in the 112th Congress, nearly 40 percent of Boehner's caucus, owe any part of their election to him or to other establishment Republicans. They ran against the establishment, against Washington, against business as usual, against compromise and negotiation, often with Tea Party backing, and they won.

From Day One, Boehner has recognized their power, but Cantor has pandered to their whims and gained their loyalty. Boehner has understood the responsibility of governing implied in majority status; Cantor has sought purity. Boehner wants to solve problems; Cantor, seemingly, to catch the tide of public disenchantment with Washington.

Boehner must prevail -- in one way or another -- to raise the debt ceiling. It may mean a divided caucus with Republicans who understand and agree with the Boehner argument voting with Democrats (certainly the remaining Blue Dogs but also liberals whom Pelosi will have to convince to compromise on their principles).

But many House Republicans will not compromise -- and will oppose Boehner. These members care more about ideological purity than winning reelection. To some, that is admirable. To others, it is irresponsible. The electorate in November 2012 will determine which view prevails -- and that judgment will determine the immediate political fate of the GOP and the length of Boehner’s speakership.