Can we ever escape product placement? 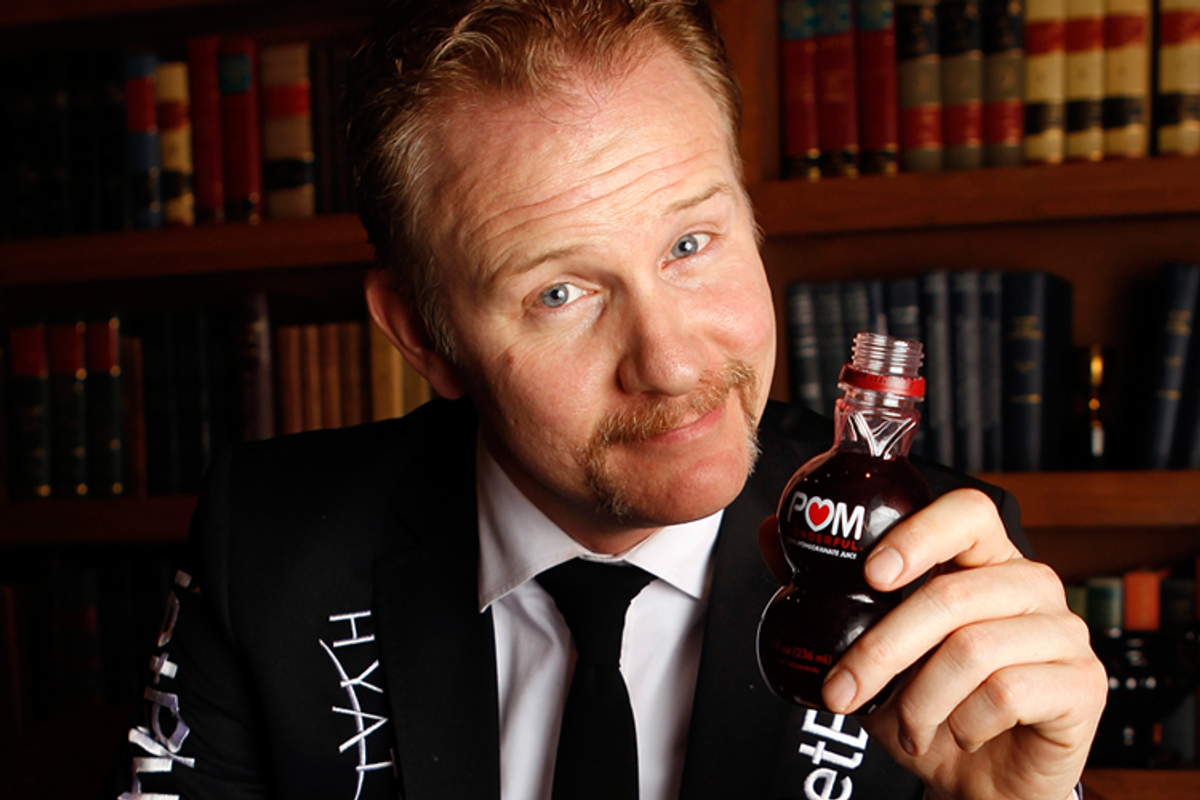 Though the decline in newspaper revenues might make you think otherwise, we are living through an unprecedented revolution in advertising -- a Golden Age for the marketing industry that makes the glory days of Mad Men look small time. But does that revolution come with a downside? Yes, says documentarian Morgan Spurlock in his recent film "The Greatest Movie Ever Sold." Using that patented brand of gonzo filmmaking he honed in his first documentary, "Supersize Me," Spurlock takes on on the taboo subjects of product placement, consumerism and subliminal advertising -- ubiquitous forces that may be difficult to detect, but that are increasingly shaping our world.

In Spurlock's wild ride down the corporate rabbit hole, he manages to achieve that rare mix of tragicomedy and hard-nosed reporting that often defines the best docu-journalism. He discussed his new film in an interview with me on my KKZN-AM760 radio show. Here's an edited transcript of our conversation -- you can podcast the full interview here.

Before we get to exactly what we find in your movie, I've got a personal question for you: How did you go from "Supersize Me," a movie abut the dangers of our existing food economy, to "The Greatest Movie Ever Sold" about product placement? Is there a natural link here, or was it something else?

Well I think there was [a natural connection]. In between "Supersize Me" and "The Greatest Movie Ever Sold," we did three seasons of our TV show "30 Days," [and] we did "Where in the world is Osama bin Laden?" And along the way there was a path of continuing to explore very important societal and pop culture questions, which ultimately ended up with us coming to this world of advertising and marketing. Today it seems like you can't walk out of your house without somebody trying to sell you something.

For example, I used to go to the bathroom and that used to be "me time." You know, I used to have a little quiet time for me. And now there seems like there video monitors or billboards inside all these restrooms. And I was like, that sacred space is gone. Everything is for sale, and I think that's ultimately what this film explores.

Is that something that's different now than it had been in the past? Hasn't the American way been one of entrepreneurship, and selling -- and has this changed?

I think it has completely. What we've done now is we've continued to give over this influence to corporate interests. One of the things that we talk about in the film is how school districts -- as they continue to get their budgets cut and continue to have money taken away from them -- are letting in advertising [to make ends meet]. So whether it's on buses or in schools or banners at the football stadium or inside gymnasiums or being piped into the televisions on Channel 1, or naming rights to certain venues -- this is happening. This door is opening and getting wider and wider every day. And I think that the one place where we should be able to have that sacred space still is an educational institution -- especially elementary schools, junior highs and high schools.

It's interesting that you bring this up because there was recently a debate in the Colorado legislature over whether to raise private funds to do renovations on the State Capitol, and one of the ideas floated was to let the corporate underwriters of those repairs put banners on the dome of the State Capitol.

Exactly. So, then the question become what to do about this. What can be done about this in a nation that prides itself on its First Amendment?

I'm all for the First Amendment. I'm also a business owner, so I understand the value of the free enterprise system. You know I think there has to be a way where you start to help these places -- especially places like school districts -- meet their budget gaps. You know the bigger problem in our country, as we continue to look to these corporate interests who are going to be funneling the money [into these institutions], is that we've shipped all of our industry away. So there's no [public] money coming in... I feel like there have to be some real generational questions that we ask about what is this new economy that we have to generate new income from.

Some conservatives who will listen to this will say, well uh, you guys, liberals just wanna regulate everything.

But what would you say to adults who would say, okay I'll stipulate to you we should regulate what is advertised to kids in schools, but when it comes to advertising aimed at adults [anything goes] because they can just put the filter on because they're mature enough to deal with it.

To a point I agree with that. I think that ultimately as a society and as adults it's up to us to say, well, where do we draw the line? There's a great scene in the film where we go to Sao Paolo, Brazil. Sao Paolo is a city that's been riddled with crime, pollution, you name it. And so they passed a bill about five years ago called the Clean City Act. The city council said before we can address the other problems that we can't see we need to able to see those problems, so let's eliminate the visual pollution, and so the Clean City Act banned all outdoor advertising. There are no posters, there are no billboards, there are no advertisements on the outside of buses or taxis. It's one of the most remarkable things you'll ever see.

Once they got rid of this, suddenly they started to fix up the city. Crime went way down. Business went up, you know the success of these businesses went up because it forced them to focus on the quality of their product versus the ability to just get people in the door. And so you see the change made within this one city, and there's a light bulb that goes off when you see it in the movie, and you're like, wow -- what if we started to pull this back a little bit? What if we started to focus on the quality of out products, and our relationship with consumers, rather than showering people with marketing?

Sure, but I think it's worth a conversation. I think that to suddenly say that somebody selling something in a targeted advertisement to kids has the same rights as someone who wants to defend their country or defend an idea... I agree that there's a First Amendment right that's there, but at the same time there's also a quality of life question that you have to put first in that argument.

Some people will hear our conversation and say, well you know, Sirota, your radio show has advertisements and Morgan Spurlock, you work in a media world where to get a movie out there you have to go and sell your movie. How do you personally deal with those questions?

For me, the whole idea is to kind of use the mechanism against itself. Ultimately that's what I do. I use this film and the technology behind it to expose the problems. I literally had people who sponsored this film for me talk about how sponsorships in advertising are a problem. What I'm doing is I'm in a pursuit of truth, I'm in a pursuit of exploring topics in a way that is open and honest and engaging and entertaining. What I love about the film, and what you'll see when you watch the film, is that I start to break down and start to critique everything that's happening in the world of advertising and marketing. And what you see as we start to implement our marketing plan for the movie, which uses all the [ad techniques] that we critique in the beginning. And so hopefully this full circle, this whole satire as it comes full circle, isn't lost on an audience.

What are one or two of the most shocking techniques or examples of product placement that you came upon that people will have trouble even believing.

There's a new process called "neuro-marketing." What they're doing is they're testing commercials by putting people in MRI machines. They strap you down to an MRI and they start showing you commercials and they measure your brain waves -- they actually record your brain activity while you watch it.

So from a subconscious level, here's how your brain is reacting to seeing these commercials. And on a base level -- they really gauge caveman response -- things like fear, craving and desire, and where those things fit within the commercial timeline. Then they re-edit the commercial so that the commercial that ultimately hits the air is the one that affected a majority of the people the most, so that now what you're watching is a commercial that -- while it might not affect everyone -- it will affect 60 to 70 percent of the people in a way that [makes] them want that product. That's a really crazy thing.

To play devil's advocate here -- that is the advertisers prerogative, is it not? Shouldn't they be allowed to make sure that the ads they're spending money on are the most effective they can be?

When you start dealing on levels of the subconscious and the manipulation of something we're not even cognizant of -- you're starting to manipulate choices, it's almost like pre-cognitive advertising, like Minority Report advertising. Like, "I know what you're going to buy before you even buy it." I think there's a level of manipulation and control that we don't have as consumers and we don't understand why it's happening.

For instance, I have such a love-hate relationship with Amazon, because everything you have ever bought on Amazon has been tallied, and they know everything you've ever bought, when you bought it, what your average spend has been, the time you're most likely to buy, the products you're most likely to buy and why, so anytime you go on there now they know that there is a certain percentage chance that you will buy some item, especially if it's advertised to you in this certain way.

There's an incredible amount of algorithms that target you, and it's brilliant. It's incredibly brilliant, and do they have the right to do that to you? Of course they do, but it's one of those things where you don't understand the level of manipulation and meta-tagging that's going on to get you to buy [something], and it's going to get smarter and better over time. What I think this film does is start to provide you some tools to be aware of it.

As much as we need to ask regulatory questions about public spaces and about messages directed at children in schools, are there specific things that adults can do in our daily lives to not just be aware of what's happening, but to actually combat this kind of manipulative advertising?

Awareness is a huge one -- actually being conscious of the shopping choices you're making is a big one. And understanding the amount of marketing that's in the world around you every single day is a big one. I think you have to start to ask yourself, "How much is too much?" The fact that they're talking about selling off the naming rights to parks and playgrounds here in New York City -- where do you draw the line? Is that too much? Yeah, in my opinion that's too much. There has to be another way for us to fix those problems beyond that.